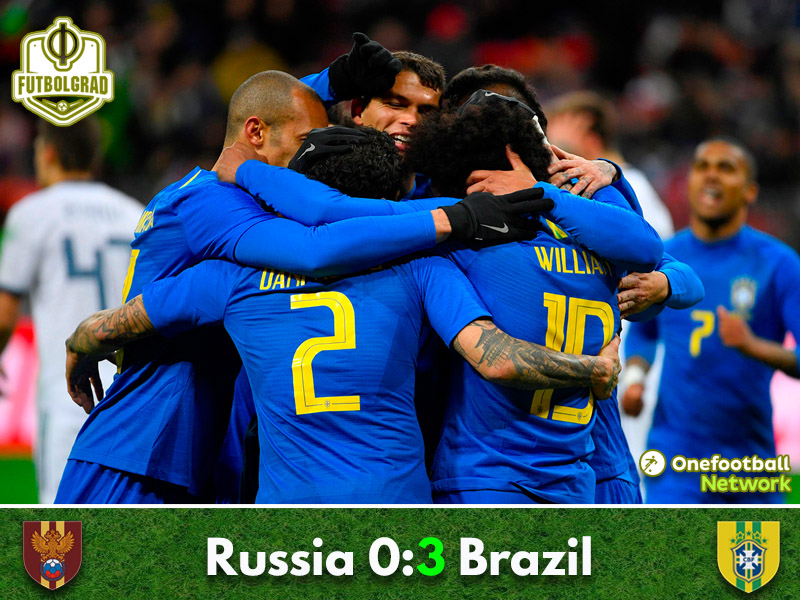 Russia v Brazil ends with the Sbornaya having no answer to the Seleção’s superior quality as their high-tempo pressing petered out on a chilly Moscow evening.

Joao Miranda’s back-post tap-in kick-started Brazil’s performance that had failed to ignite in an evenly-fought opening half as Tite’s men ran in three unanswered goals. Despite pressing well for large parts of the game Russia couldn’t create enough genuinely clear-cut chances and were blown away by two goals in five minutes just after the mark. Philippe Coutinho cooly sent Igor Akinfeev the wrong way after Aleksandr Golovin was adjudged to have pulled Paulinho’s arm in the box before Paulinho himself got on the scoresheet with an unmarked header from six yards.

Brazil predictably started on the front foot with the lion’s share of possession as Russia sat deep, leaving Fyodor Smolov a lonely frontman. Gabriel Jesus had the first chance of the game when he collected a ball over the top from Paulinho but could only hit a low shot straight at Igor Akinfeev. The Russian captain was rarely tested despite Brazil having six shots on target before the break, and as the half grew on Russia’s midfield gradually gained in confidence as they pressed higher up the pitch.

Gabriel Jesus was called into action to nod behind a dangerous Aleksandr Samedov free kick, while Thiago Silva was hassled by Fedor Smolov, Golovin and Aleksei Miranchuk on his own byline after 15 minutes. Douglas Costa was the major threat on the left wing for the visitors with his searing pace, and although he had the beating of Aleksandr Samedov more than once, he failed to lay on a genuine clear-cut chance until 30 minutes in. Driving across the edge of the box he slipped the ball wide to Willian just before being upended, but the Chelsea man’s finish was directly at Akinfeev.

Aleksei Miranchuk was tasked with providing the link between midfield and Smolov up front, and with less than 10 minutes till half time he almost found the breakthrough. A lovely first touch allowed him to turn and feed Russia’s striker and burst forward, receiving the return pass only to blaze an effort over. The understanding between the two was the biggest sign of promise alongside a well-organised midfield trio lead by Denis Glushakov.

The warning signs were there within seconds of the restart though when Douglas Costa once again caused the damage. With acres of space to play with and a struggling Vladimir Granat in front, he simply knocked the ball past his opponent and raced effortlessly past. His deep, whipped cross found Willian on the right, whose ball into Casemiro was side-footed from a matter of yards out, only to be thwarted by a reaction save from Akinfeev.

Coutinho was beginning to regain his arrogance that won him a multi-million pound move to Barcelona last summer, and as he danced around the Russian defence five minutes after  Miranda’s opener, Paulinho should have doubled the lead. His simple finish later would atone for the miss, however, and send Brazil to a comfortable win.

Douglas Costa – The Juventus winger had the unenviable task of replacing the talismanic icon Neymar Jr up front, but he was a constant threat down the right-hand side. His incredible pace kept Samedov constantly backtracking to help out Vladimir Granat, and although he neither scored nor assisted, he gave an outlet whenever his side were under pressure. 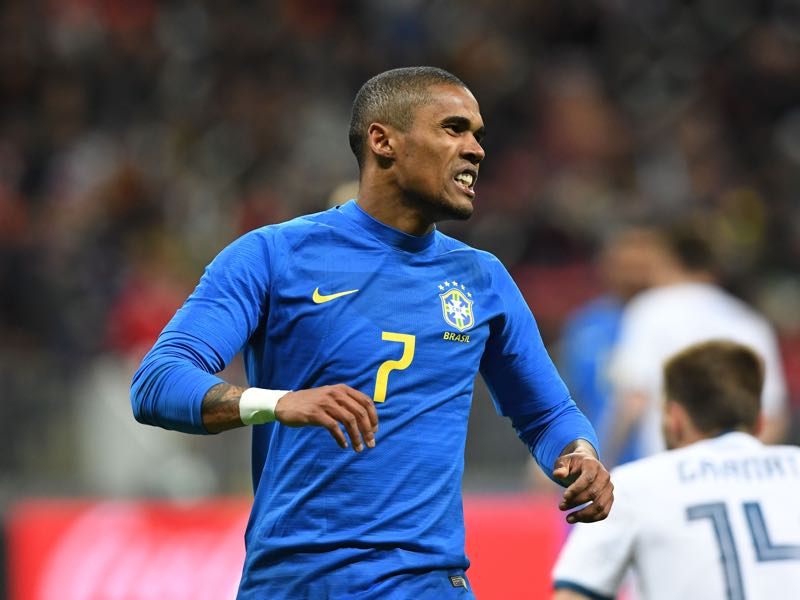 Aleksandr Golovin’s tug on Paulinho for the penalty decision was a little harsh on the CSKA Moscow man, although the ease with which the Brazilian ghosted onto Marcelo’s flicked through-ball. There was clear contact, so on that basis Golovin can’t be completely frustrated with the official’s decision. One wonders whether Paulinho threw himself to ground a little too easily, but in the end, the damage was already done.