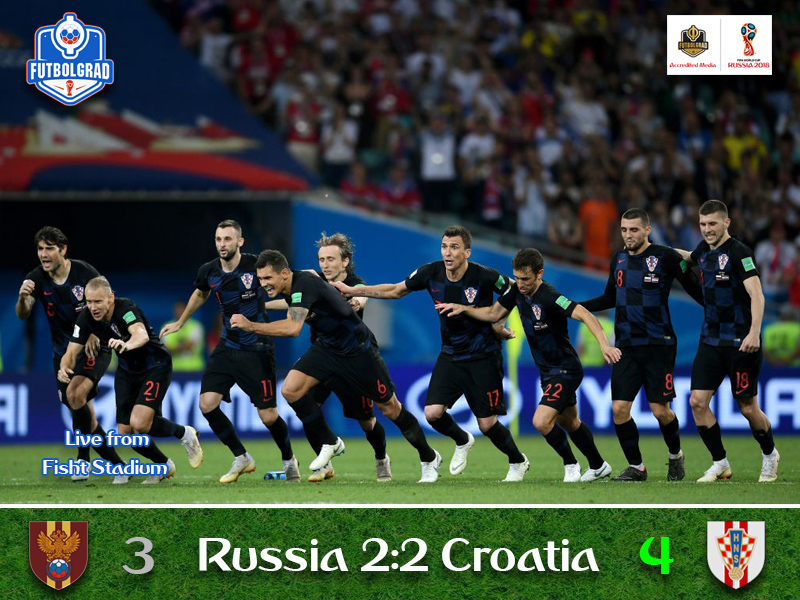 Croatia shatters Russia’s dreams and move on to face England

Russia v Croatia saw the host, Russia, face one of the potential dark horses, Croatia, of this tournament. Having already hosted Germany against Sweden the Fisht Stadium in Sochi was once again the scene of a dramatic match in which the host nation were eliminated in the penalty shootout.

Will Russia’s head coach Stanislav Cherchesov park the bus again? That was the main question fans asked ahead of Russia’s crucial clash against Croatia. The question was no, at least based on Cherchesov’s 4-2-3-1 formation. Croatia, in the meantime, brought all the guns to the fight starting forwards Andrej Kramarić, Ante Rebić, Ivan Perišić and Mario Mandžukić.

Firepower on the field and a frenetic Russian fan base that had started to believe their hype. “Who if not you, when if not now,” read a banner unrolled before the match.

The banner set the stage for the fans and the Sbornaya, who unlike the previous game came out with guns blazing challenging Croatia much further up the field then it was the case against Spain.  That, however, seemed to suite Croatia just fine.

Croatia love a good battle, however, and reacted to Russia’s athletic game with elbows of steel and stamina. Using the open space in midfield, they attempted to explore Russia’s wide areas and in the 11th minute had their first good chance when Sime Vrsaljko played a hard pass from the right flank into the centre of the box but Mario Mandžukić struggled to control the ball, and the chance was gone.

Following the chance, Cherchesov started to become agitated directing his team further back. Indeed, Russia started to change shape in midfield trying to slow down the match. As a result, the match started to slow down with many of the key battles now taking place in midfield with little room for either side to break through into the attacking third.

That deadlock was broken in the 31st minute. Artem Dzyuba won the ball 25-yards out ended up being blocked, but the ball fell to Denis Cheryshev. The Villarreal midfielder just looked up for a second and then hit the ball from 20-yards out shocking Croatia’s Danijel Subašić as the keeper had to watch the ball sail into the top corner.

After the goal, Russia quickly started to look for more and lost shape in midfield. Sensing an opening in the 39th minute, Mandžukić dropped to the right to sprint forward into a gap in Russia’s defence quickly. Once in the box, he sent a low cross to the edge of the six-yard box where Andrej Kramarić was waiting to head the ball past Russia’s keeper Igor Akinfeev.

The first half was a frantic affair and the time seemed to fly as both Russia and Croatia tried to break the opponent down with speed and aggressive play rather than the coy performance we saw by the Sbornaya against Spain.

With that aggressiveness also came a lack of shape, however, and Russia struggled with their shape when the second half kicked off. At this point, Cherchesov could be found walking up and down his coaching zone like a tiger trapped in a cage. It is unusual to find the 54-year-old agitated, but the head coach was unhappy with the Sbornaya’s performance.

Ten minutes into the second half Cherchesov reacted and brought on Aleksandr Erokhin for Alexander Samedov. With Erokhin in Cherchesov tried to gain more control over the centre of the park where Croatia had to much room in the opening stages of the second period.

Russia struggled, however, and in the 60th minute, we witnessed an Akinfeev classic. The CSKA Moscow underestimated a cross by Ivan Strinić allowing Kramarić to extend the ball, two Russian defenders then blocked one another allowing Perišić a free shot, which ended up hitting the inside of the post and then bounced back into the field.

At that point, Russia looked in trouble, and the fans reacted with boos and whistles whenever Croatia had the ball and loud chants of Rossiya, Rossiya, Rossiya whenever the Sbornaya won the ball. Overall, however, the atmosphere changed away from the carnivalesque spirit at the first interval towards the nervous frenzy experienced at the quarterfinal match against Spain.

Again Cherchesov reacted trying to regain control of this match. Next off was the excellent Cheryshev, seemingly exhausted, Fedor Smolov replaced the midfielder in the 67th minute, which in turn meant that Russia changed shape to 3-5-2. That change led to Russia’s first chance in the second half.

Smolov winning the ball in midfield stormed towards the box, but then seemed to miss the right moment to play the pass in the centre only to then lay off the ball to Mario Fernandes on the right. Mario Fernandes’ cross then found Erokhin, but his header from just five-yards out zipped over the crossbar.

The chance aside Russia lacked creativity and energy to break down a well organised Croatia team that seemed happy to give the ball to Russia. Again Cherchesov made a change. In the 80th minute, he took off Artem Dzyuba and brought on midfielder Yury Gazinsky – again this was an attempt to gain control over the midfield and spark Russia back to life.

Like it was the case against the Spain match the minutes once again slowly ticked away. But unlike the Spain match, Russia did not seem in control. Instead Croatia, despite the possibility of extra-time, seemed almost ensured that they would go through. An assuredness that was already on display against Denmark where it took 120 minutes and penalties for the Vatreni to go through.

That confidence by Croatia was confirmed in the 101st minute when Croatia scored their second goal of the match. A corner from Luka Modrić found Domagoj Vida whose header seemed soft but bounced past several defenders to give Croatia the lead in extra-time.

Croatia were now in control and even with goalkeeper Subašić struggling with a calf-injury had an air of confidence about them that seemed unshakable. Regardless, Russia kept fighting, and in the 111th minute, Daler Kuzyaev’s fired a dangerous shot from outside the penalty box that was stopped by a sprawling Subašić.

Russia needed a miracle at this point, or as it seems to be the theme of this tournament a set-piece. That set piece arrived in the 115th minute, Croatia’s Josip Privarić handled the ball outside the box, and Alan Dzagoev, brought on for Golovin earlier in the match delivered the ball perfectly for his CSKA teammate Mario Fernandes to beat Subašić with a close-range header.

The goal set the stage for another penalty shootout. Mario Fernandes may have been the hero in extra-time, but the Brazilian-born right-back felt both the highs and lows of football as he was one of two Russians to miss their penalties. Fedor Smolov would step up first but had his shot saved by Subašić. Brožović would score for Croatia to get the Vatreni ahead.

Dzagoev would score his and Akinfeev would stop Mateo Kovačić’s penalty. Up next was Mario Fernandes and his shot would be off target and with all the remaining shooters scoring the Brazilian was the tragic figure of the night as Russia are out of the tournament.

Luka Modrić was the player of the match. The Croatian midfield maestro kept his side together even after going down early. Modrić played 89 accurate passes (87.3% pass completion) had eight successful dribble attempts and made four key passes. Furthermore, he assisted on Domagoj Vida’s goal with an excellent corner-kick. 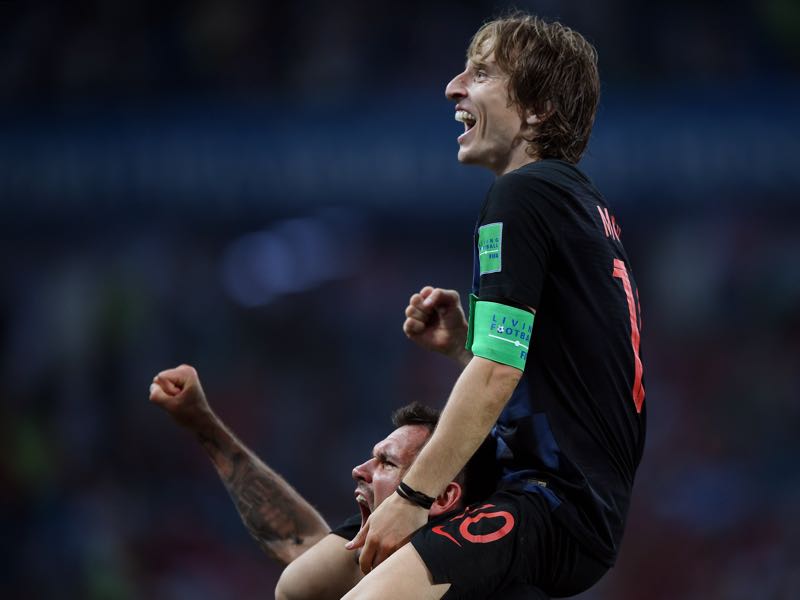 Russia are out, but the players were sent off with a round of applause. Despite the banner ahead of the match, the Sbornaya fulfilled, perhaps over-fulfilled, realistic expectations. The Sbornaya took one World Cup favourite the full distance and a second all the way to penalties despite going down in extra-time.