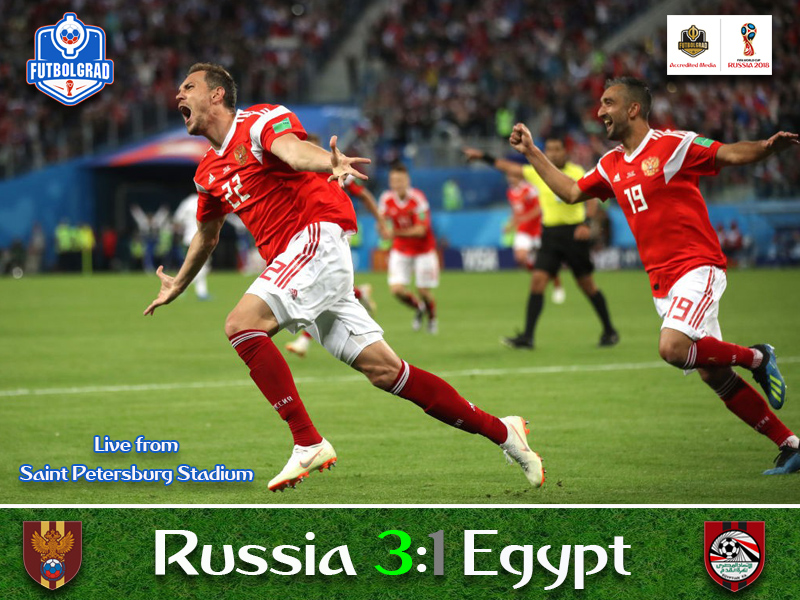 Russia v Egypt ended with the Sbornaya pretty much securing a spot in the last 16 by dominating Les Pharaons on matchday 2.

The noise was deafening inside the Saint Petersburg Stadium with both sets of fans turning the gigantic soup bowl like stadium on the Krestovsky Island into a cauldron. In that cauldron, it was Russia that took the initiative with Yury Gazinsky having the first shot on goal in the sixth minute, but the shot went just wide of Mohamed El-Shenawy’s goal.

During the opening phase of the game, it was almost hard to believe that this Russia side had been so heavily criticised in the buildup to the tournament. The Sbornaya pressed hard winning the ball back whenever they lost it and continuously forced Les Pharaons on the backfoot. The Russians also explored weaknesses on either flank where they found space trying to feed centre-forward Artem Dzyuba, who started the match instead of regular starter Fedor Smolov.

It took until the 16′ minute for Egypt to produce something tangible. Left-winger Trezeguet spotted an opening on his flank and broke into the box, but his curled effort missed Igor Akinfeev’s goal. Russia was only briefly irritated by the attempt, however, and stunk right back with Denis Cheryshev seeing a shot from 20-yards fly over the crossbar.

From that chance a happy back and forward developed with both teams quickly playing through the midfield trying to catch the opposition on the backfoot. For Egypt, this meant that they were now more involved in the game. Russia, on the other hand, seemed to struggle with their mission to feed Dzyuba with long balls played into the penalty box.

The next big chance fell to Egypt. In the 35th minute, a long ball into the six-yard box seemed fall favourably for Mohamed Salah, and it was only thanks to Yuri Zhirkov’s last-second toe-poke that the Liverpool forward was left off the scoresheet. The Egyptian dervish then seemed to have finally found the opening in the 41st minute – turning Ilya Kutepov inside out at the edge of the box he found the space to unleash a shot, which, however, missed the goal. As a result, the two teams would be at a deadlock going into halftime.

It took just a few moments in the second half for the first goal to arrive. Aleksandr Samedov played a ball in from the right that was poorly cleared by El-Shenawy right to the feet of Roman Zobnin, who played the ball back in the box trying to find forward Artem Dzyuba. Trying to clear the ball Ahmed Fathi failed to get proper control redirecting the ball into his net in the 48th minute.

The goal only briefly shocked Egypt, and in the 56th minute, Salah should have scored the equaliser when he turned Kutepov inside out once again but once again his shot was off the target. Instead, it was Russia, who would score to seal the deal on the match.

Breaking forward in numbers in the 59th minute, Dzyuba would redirect a ball to the right where Aleksandr Samedov spotted Mario Fernandes inside the box. The Brazilian born right-back passed the ball to the centre where Denis Cheryshev simply had to slot the ball home. But Russia was not done there. Just three minutes later a long-ball found Dzyuba, who managed to tap the ball past a defender and then beat goalkeeper El-Shenawy to make it 3-0 with a wonderful finish.

In the 73rd minute, Egypt were given a lifeline. Attempting to break into the box Salah was held by Zobnin. At first, the referee decided on a free-kick but upon video review decided to award a penalty instead, which was promptly executed by Salah.

Still two goals up, however, Cherchesov made two key tactical changes. The more defensive Daler Kuzyaev was brought on for Denis Cheryshev (73′), and Artem Dzyuba had to make way for the faster Fedor Smolov (79′). The strategy was clear sit deep, let Egypt come, and hit Les Pharaons on the counter-attack.

The tactic worked well in that it contained Egypt. At the same time, Russia still managed to break forward at times but without creating another significant goal scoring chance. In the end, Russia were deserved winner that ended with Russia having pretty much secured a spot in the knockout stage.

Denis Cheryshev was the man of the match. In fact, the Villarreal midfielder has had a Cinderella tournament thus far. Slatted as a fringe player, who was supposed to start from the bench Cheryshev made the most of Alan Dzagoev’s injury. After scoring twice in the opener against Saudi Arabia, the attacking midfielder added another against Egypt tonight and was a constant attacking threat. With performances like this  it is hard to believe that he almost did not make the squad.

64448 attended the match leaving almost 400 seats empty. Furthermore, most of the noise was made by Egypt supporters only when Egypt took control did Russia fans start to make noise – Rossiya, Rossiya, Rossiya chants, however, only started to take over when the final whistle was almost there. In general, there has been a sense that this side could not achieve much that might now change as Russia has all but secured a spot in the round of 16.