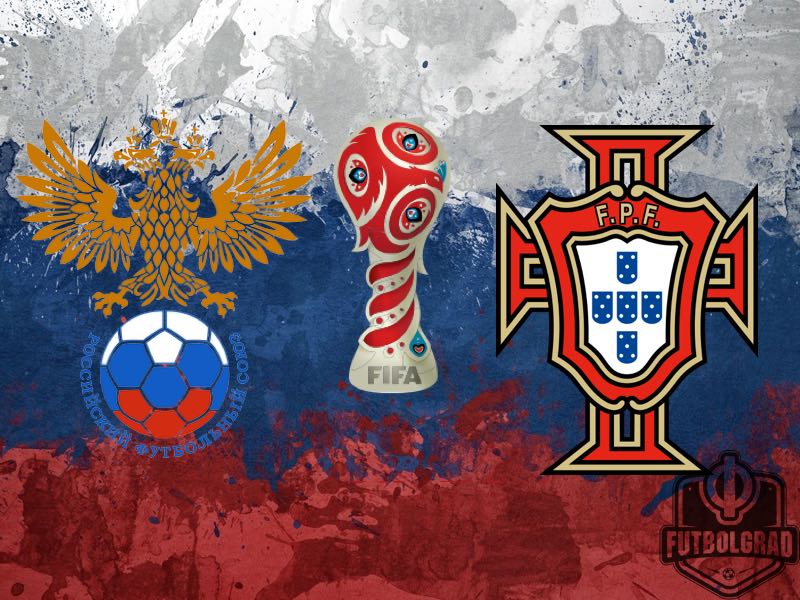 Welcome from matchday 2 of the FIFA Confederations Cup. We are at the Spartak Stadium to cover Russia v Portugal here on our Liveblog.

Russia were much improved in the second half, but lacked the creative spark to break down a very well organized Portuguese side. Portugal in the meantime did what they needed to do and effectively won the game thanks to the creative genuise of Cristiano Ronaldo. The Real Madrid striker was effectively shutdown for the remainder of the match, but sadly for Russia Ronaldo only needs one opportunity to score. Russia will now face Mexico on Saturday in what will be a must win game for the Sbornaya. Portugal in the meantime are in the comfortable position of simply having to beat New Zealand on matchday 3 to advance.

Last chance here for Russia, but Smolov’s shot from distance misses the target.

Chance for Dzhikya after a corner, but his header misses the target.

Penalty shout here for Russia, but Bukharov goes down to easily in the box and the referee rightfully says play on.

Just four more minutes in regular time and Portugal are back in Euro 2016 mode shutting out the opposition by playing disciplined football.

Forward Aleksandr Bukharov is on for defender Kudryashov. Russia need a goal badly to at least salvage a point here.

Less than ten minutes to go and the Sbornaya are still 1-0 behind. Can they overcome a Portugal side that very much appears to be in control.

The first positive here for Russia. Spartak Stadium is full.

Samedov is also shown a yellow-card. The Spartak Moscow winger pushes down Eliseu on the left-wing. Good freekick position for Portugal, which is, however, wasted.

It is getting heated! Georgy Dzhikya takes out Pepe with a strong tackle. The Portuguese defender tries to follow up, but Dzhikya simply pushes him to the ground. The Russian defender is shown a yellow-card.

Russia are now on the attack and it looks like it will only be a question of time till they will equalize.

68. Minute Russia are now on the attack and look much improved. #RUSPOR pic.twitter.com/u5qURG2ey7

Dmitry Poloz is about to come on for Dmitry Kombarov. Looks like Cherchesov is desolving his defensive block.

In their quest for the equaliser Russia have opened up now, which seems to suit Portugal’s counterattacking game.

Fantastic chance for Russia. Samedov wins the ball on the right wing and crosses the ball into the box where Smolov misses the ball by a whisker.

Russia establish themselves at Portugal’s box and then are hit on the counterattack at which end Andre Silva almost makes it 2-0. Shortly after Akinfeev has to parry another chance by Portugal.

The crowd is shouting nuzhen gol (we need a goal). That is certainly true Russia are trailing and at this point are lucky that the deficit is just one goal.

Massive chance for Portugal to make it 2-0! Andre Silva finds the space for a free header from close range and Akinfeev has to do well to stop the shot.

Erokhin is slotting in right behind Smolov it seems. The tall midfielder from FC Rostov certainly seems capable in providing the necessary outlet to release Smolov on attacking runs.

Stanislav Cherchesov has taken off Roman Shishkin and brought on Aleksandr Erokhin. Erokhin is not exactly a second striker, but he could help bringing some attacking flow to Russia’s game.

The match went as expected in the first half. Russia’s defensive lineup had very little creative spark and was unable to break down a very disciplined Portuguese side. Portugal in the meantime were happy to control the ball and wait for Ronaldo to make the difference. It was, therefore, no surprise that it was Ronaldo who would make the difference. Stanislav Cherchesov will have to find a way to make his side play more aggressive football.

Some beautiful footwork by Bernardo Silva here, who balances the ball on his knee and then passes the ball on. The Portuguese now appear happy to carry over the score to the second half.

Biggest chance for Russia here. Samedov brings the ball in the box where Smolov is free. But the Krasnodar forward can’t redirect the cross on target.

Russia are struggling, but the fans have been outstanding supporting their side enthusiastically here at the Spartak Stadium.

More of the same here really. Portugal control the match and Russia sit deep. The Sbornaya struggles to find a way out of their defensive positioning. Perhaps Cherchesov should introduce a second striker for the second half.

Portugal almost with the second goal. Cristiano Ronaldo breaks through on the right side and finds the space for a finish. Akinfeev, however, does well to parry the shot and the Russian defense can then eventually clear the situation.

Yuri Zhirkov breaks through on the left wing and is then brought down outside the box, but his appeals for a freekick are being left unheard.

Russia are going forward more aggressively now. But this also leaves the Sbornaya more exposed in the back. At the moment Portugal appear the more dangerous of the two sides.

Russia are deep into Portugal’s half now, but can’t find a way into the box.

Portugal have 60% possession at the moment. They are almost toying with the Sbornaya, who can’t get control of this game.

A bit better now by Russia. The Sbornaya are attempting to break out of their defensive strategy. Denis Glushakov has now pushed up a bit, which leaves Smolov less exposed. Portugal in the meantime appear happy to absorb the pressure.

The Sbornaya sit too deep to create pressure on Portugal.

This goal has been coming. Russia are set up to defensive and can’t find an attacking outlet. Smolov it appears is to isolated up front. Meanwhile in the back Russia are somewhat disjointed making it easy for Portugal to find ways through.

First good attacking run by Russia. Aleksandr Samedov finds some space on the right flank and brings in a cross. But Portugal keeper Rui Patricio can clear the situation.

Viktor Vasin finds himself in huge trouble on the left flank, but can eventually clear the ball. Portugal press hard and Russia look almost to defensive.

Russia appear somewhat nervous here in the early minutes. The buildup play is disjointed and the Sbornaya can’t find an outlet for Smolov.

Russia are on the defensive right away. Also it appears that they will try to release Fedor Smolov on quick counterattacks.

Here we go the match will kick off with a rather defensive looking Sbornaya. Cherchesov told us yesterday he was going to respect Portugal. It looks like respect is an understatement.

The players are out on the pitch and we are getting all ready for the national anthems. Five minutes to go what will be Russia’s biggest match at this tournament thus far. 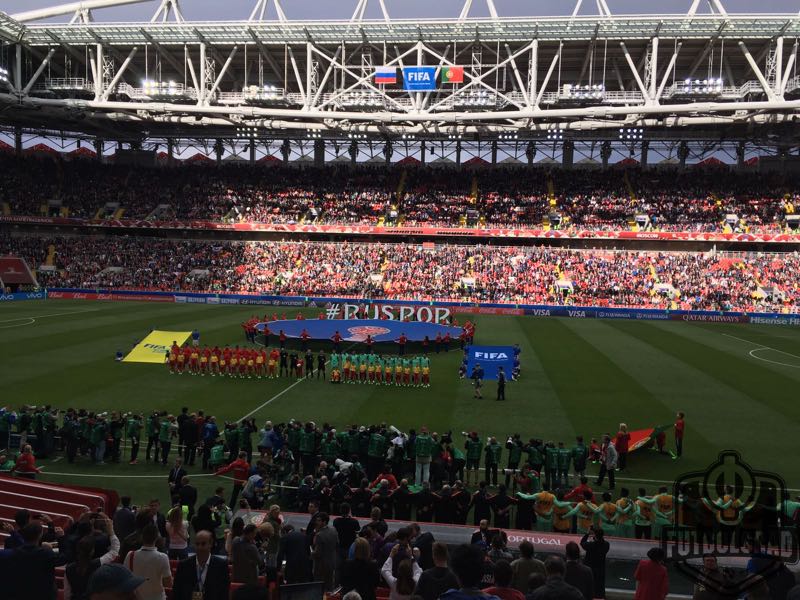 The teams are lined up for the national anthems. Image by Manuel Veth 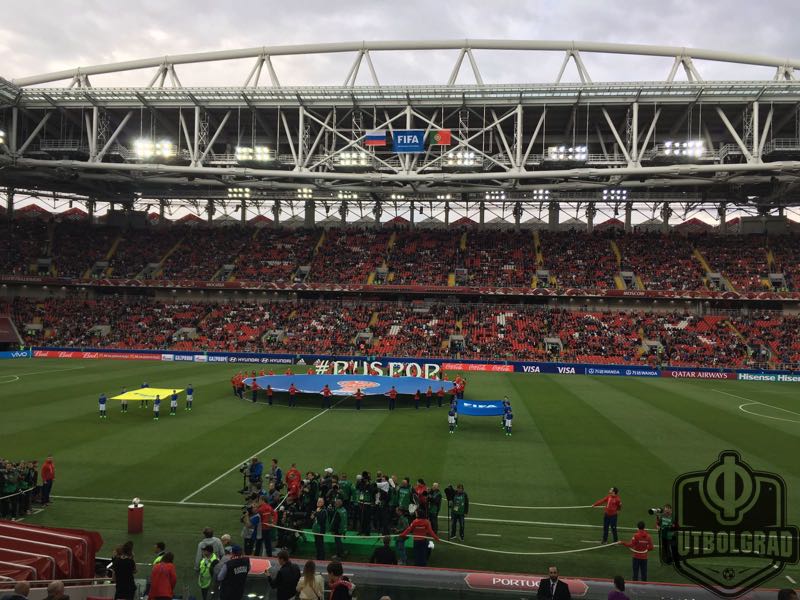 Russia v Portugal everything is set for the main event. Image by Manuel Veth

15 minutes to kickoff and the stadium is slowly filling up. It might not appear that way yet, but there is no doubt tonight’s match will actually be sold out. Loud Rossiya chants now this is going to be a fantastic match!

Huge rounds of applause for Spartak Moscow’s Denis Glushakov and matchday 1 goal scorer Fedor Smolov. But it is Cristiano Ronaldo who receives the biggest round of applause here. It will be fascinating to see how Ronaldo will perform in this match. 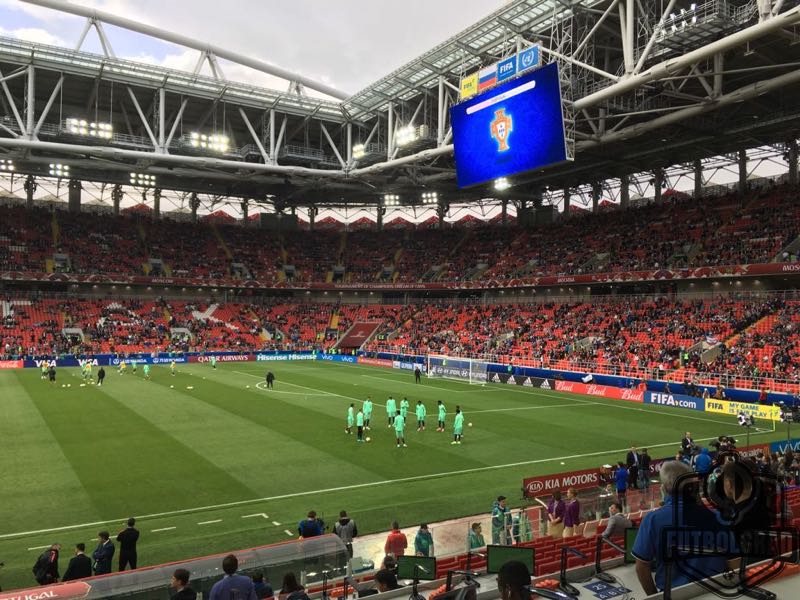 Both teams are now warming up. We just received the tactical lineups for Russia v Portugal.

The lineups are out! Cherchesov has made some changes and unexpectedly will go with a more defensive 5-4-1 formation instead of a flat three at the back. Aleksandr Erokhin and Dmitry Poloz are out and Roman Shishkin and Dmitry Kombarov are in. Portugal in the meantime will start with Adrien Silva, who started off the bench on matchday 1. Ricardo Quaresma and Joao Moutinho have been surprisingly left off.

What can we expect? Fedor Smolov and Stanislav Cherchesov spoke ahead of the Russia v Portugal game at yesterday’s press conference. Both were adamant that they would focus on their own game rather than letting Portugal dictate the way they are going to play. Portugal’s head coach Fernando Santos in the meantime voiced his respect for the Russian national team. There were also questions about Cristiano Ronald and whether his desire to leave Real Madrid will have an impact on Portugal. Santos deflected the question stating that he will just focus on the game. Cristiano Ronaldo trained at Spartak Stadium yesterday and gave no indications about the controversies surrounding him at the moment. 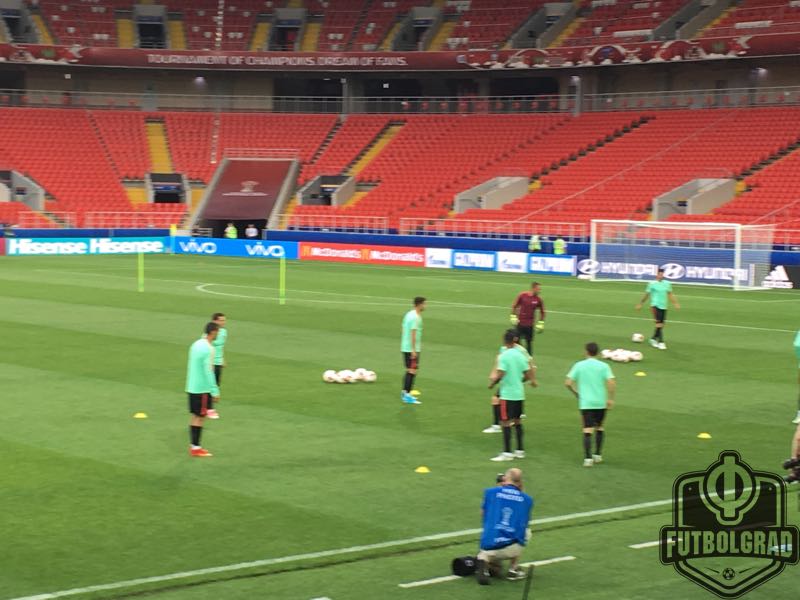 Our experts Andrew Flint and Manuel Veth give their assessment before the game.

Fantastic atmosphere around the Spartak Stadium here in Moscow. This will be the first game at the tournament that will be sold out. FIFA have struggled thus far to sell tickets to for games. Some of this is due to the fact that many Russians don’t believe that the Sbornaya will go very far in this tournament. But the main reason is expensive tickets. The cheapest ticket for this game was $15 with prices ranging up to $100, which is too expensive for the average Russian.