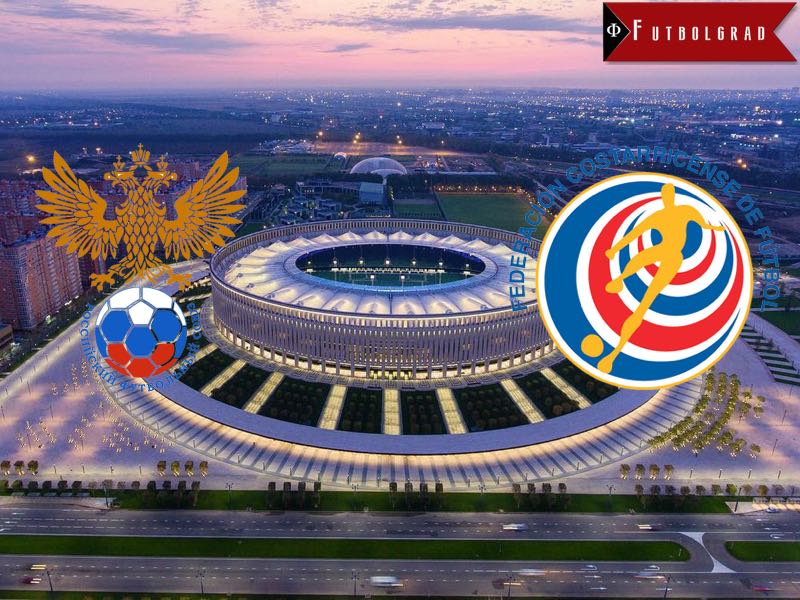 Russia vs Costa Rica – What we learned

Russia vs Costa Rica at the brand-new Krasnodar Stadium was supposed to be the first serious test against a Latin American team on Russia’s road to hosting both the 2017 Confederations Cup and the 2018 World Cup.

To some extent, Russia took on Costa Rica on Sunday to test for a potential matchup against Mexico at the 2017 Confederations Cup. Furthermore, group stage format of the 2018 World Cup will make it likely that Russia will face at least one opponent from either South America or Latin America.

Costa Rica reached the quarterfinal of the 2014 World Cup in Brazil, and the current squad might very well be the best the country has ever assembled. Russia, on the other hand, is currently in flux.

Hence, it was expected that the game in Krasnodar would be a cautious affair and, as we pointed out in our preview, there was an expectation that Russia’s new national team coach, Stanislav Cherchesov, would look for ways to stabilize the Sbornaya’s defence.

Yet, the game quickly developed into a wide-open affair with Russia having the first major chance of the game within two minutes—but Keylor Navas was able to stop Aleksandr Samedov’s breakaway.

What followed were several chances by Costa Rica, who finally openned the scoring when, in the 23rd minute, Russia’s keeper Soslan Dzhanaev, who was playing instead of the injured Igor Akinfeev, needlessly gave the ball away to Bryan Ruíz whose wonderful cross found Randall Azofeifa who made no mistake and beat Dzhanaev with a wonderful shot from 18 meters out.

It was an unfortunate moment for Dzhanaev who, up to this point, had been Russia’s best player. But things quickly got worse for Russia’s replacement keeper as, six minutes later, Ruíz found himself unmarked 35 meters away from goal and, instead of looking for a final pass, Ruíz marched to the edge of the box where he drove the ball into far corner of Dzhanaev’s net.

Two minutes later, Russia pulled one back, as a fantastic cross by Oleg Shatov found Samedov in the box and his close range diving header beat Navas and brought Russia back into the game. Unfortunately for Russia, however, disaster struck just before halftime, as Vasili Berezutski redirected a Costa Rica cross past Dzhanaev into his own net to make 3-1 for the Central Americans at halftime.

The game was, however, not yet over as Russia came out of the dressing rooms meaning business and, in the 48th minute, Artem Dzyuba was able to convert a low cross by Igor Smolnikov to make it 3-2, and then equalized the score in the 61st minute with a wonderful close range header.

At this point it appeared that the night would be salvaged, as Russia had come back from a 3-1 deficit to equalize the score in front of an electric crowd at the Krasnodar Stadium. After Dzyuba equalized the score, Russia had several opportunities to turn the score around at walk away with a 4-3 victory, but Dzyuba and Co. were unable to convert any of the chances the team created.

Hence, as is often the case in football, it was be Costa Rica that rounded up the evening. Vasili Berezutski ended a miserable evening when he fouled Joel Campbell to give away a cheap penalty in the 90th minute. Campbell stepped up to the spot kick and, despite the fact that Dzhanaev was in the right corner, Campbell’s shot was too precise for the Russian keeper, and Costa Rica walked away with a 4-3 victory.

The match is an important lesson for Stanislav Cherchesov

In many ways, the match is an important lesson for head coach Cherchesov. The three goals testify to the fact that the Sbornaya can be dangerous going forward, and with a bit more efficiency in front of the net could have won the match. Indeed, the biggest problems remain in the back, as Russia’s defence once again demonstrated its problems when dealing with fast counterattacking teams.

Costa Rica’s countergame, in particular, made it difficult for Russia’s slower defenders to keep pace. Another issue was space as, Ruíz in particular, was given too much room to guide Costa Rica’s attacking game. Dzhanaev, meanwhile, showed, at times, that he can be a good keeper, but his errant pass led to the first goal and he did not look convincing on Ruíz’s goal either. Of course, Dzhanaev is only the number two goalkeeper, but Akinfeev has, in the past, shown similar lapses.

Despite the result, however, there are plenty of positives to take away from the match. Once again, there is fighting spirit in the Sbornaya, as the team rallied back from a two goal deficit and, in the last 30 minutes of the game, seemed the more likely to walk away with the victory.

Hence, if Cherchesov is able to quell individual mistakes in defence, and also emphasize more focus from his attacking players when it comes to finishing off chances, there might be a good chance that Russia will soon walk away with comfortable victories against teams such as Costa Rica.

Of course, Costa Rica are not of the same calibre as Germany, France, Spain, Argentina, or Brazil, and the Sbornaya is, therefore, nowhere near the quality of play needed to seriously challenge for the World Cup. Yet, the effort and the refreshing attacking football on display in Krasnodar could be the first steppingstone toward a team that can be entertaining to watch no matter what the final result.