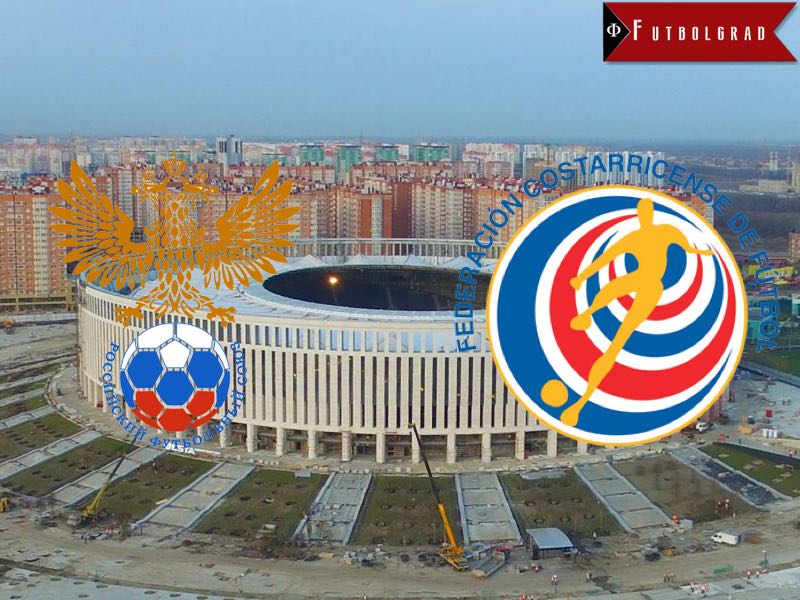 Russia will be playing its next set of friendlies on October 9 against Costa Rica in Krasnodar. Russia vs Costa Rica will be Stanislav Cherchesov’s second squad since taking over from, as the new head coach of the Russian national team (Sbornaya).

The Central American nation will provide an interesting test case for the Sbornaya’s potential encounter with Mexico at the 2017 Confederation Cup.

Indeed Costa Rica was the most successful CONCACAF nation at the 2014 World Cup. The Ticos reached the quarterfinal, and were narrowly defeated by the Netherlands in a penalty shootout.

Goalkeeper Keylor Navas in particular stood out during the tournament, and the Real Madrid keeper, who is by far the biggest star on the national team, played a crucial roll in eliminating Greece in the round of 16 in a penalty shootout, and then subsequently carrying his country all the way to a penalty shootout against the Netherlands with several outstanding saves.

Navas will be one of the main attractions when Costa Rica will play their first ever national team game on Russian soil at the brand new Krasnodar Stadium. Other Costa Rican stars will include the Sporting Lisbon attacking midfielder Bryan Ruíz and striker Joel Campbell.

Costa Rica will face a team that is still very much in the phase of finding a new identity after a miserable European Championships in France. Indeed Stanislav Cherchesov has made some minor adjustments to the squad that played their first two friendlies on the way to Russia 2018 against Turkey in Antalya (0-0) on August 31, and Ghana in Moscow (1-0) on September 6.

The national team will be without longstanding keeper Igor Akinfeev, who was injured in CSKA Moscow’s 2-0 defeat against FC Rostov. Aleksandr Belenov, who moved from Kuban Krasnodar to Anzhi Makhachkala this summer, will replace him.

In defence Cherchesov has chosen not to nominate Roman Neustädter, as the Fenerbahçe defender/midfielder has been struggling since making the move from the German Bundesliga to Turkey last summer.

At the same time Cherchesov will need to find space for Neustädter eventually, as Russia’s aging defence could be dependent on the skills of the player, who was naturalized just before Euro 2016. In his stead Cherchesov will have to rely on the 34-year-old Vasili Berezutski, who showed signs of age at Euro 2016.

The emergence of Ivan Novoseltsev as a steady defender for FC Rostov last season means that Russia has alternatives at the back. The centre back played 90 minutes in both friendlies against Turkey and Ghana. But a last minute move from Rostov to Zenit at the transfer deadline has significantly reduced his league minutes.

In fact Novoseltsev played just 43 minutes in three matches since making the switch to Russia’s richest club. Mircea Lucescu is known for taking his time when it comes to integrating new signings into his squad, but Cherchesov is very short in alternatives at the back, and will therefore hope that Novoseltsev’s move from Rostov to Zenit doesn’t prove to be dead end in the player’s career.

The last surprise is the nomination of Kirill Panchenko from recently relegated Dinamo Moscow. Bringing in players from the second division is certainly an unorthodox move by Cherchesov.

Panchenko had a lingering career so far. There have always been indications that the striker has potential—he scored seven goals in 27 games for Tom Tomsk in 2014-15, which earned him a transfer to CSKA.

But so far he has failed to make an impact at CSKA, and the club decided to loan him out this season to city rivals Dinamo. The move down to the second division seems to have done wonders as he has scored 11 goals in 14 matches for Dinamo this season.

Hence, Cherchesov has given in to media pressure by calling up the striker to the Sbornaya. It will be interesting to see whether Panchenko will feature at all against Costa Rica on Sunday.

Either way the test against Costa Rica will provide an interesting challenge for Cherchesov. It will be difficult to determine who will walk off the pitch as the winner, but one thing is for certain Russian football experts will be dissecting the game closely, to see whether there is progress in Cherchesov’s attempt to get the team ready for the Confederations Cup in 2017, and more importantly the 2018 World Cup in Russia.