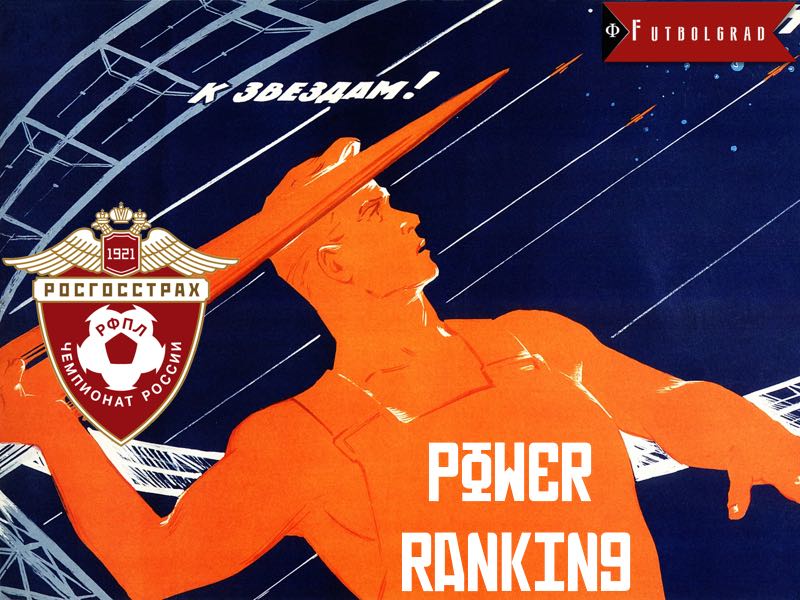 The results mean that Spartak Moscow are now eight points clear of CSKA Moscow and Zenit Saint Petersburg. Spartak will host Zenit next Sunday (we will preview the game in great length on this page), and then will face CSKA Moscow on matchday 26. But, even if Spartak lose both matches, the gap will be likely too big, at this point, for Zenit and CSKA to catch up.

In fact, not only will both CSKA and Zenit have to beat Spartak, but they will also have to play a perfect season if they wish to prevent Spartak’s first championship since 2001. While Spartak are always good for a last minute stumble, the title race, therefore, seems to be all but wrapped up.

It will, therefore, be interesting to see who will finish in the Champions League and the Europa League spots, and who will have to take the tough road to the Russian Football National League (FNL). Therefore, with eight games to go, the Futbolgrad Network has put together the first ever Russian Football Premier League power ranking to determine the trajectory of every club in the league.

Spartak had a little wobble at the beginning of the second half of the season when the Myaso dropped points to Krasnodar and Lokomotiv. A late win against Orenburg and a decisive result against Ufa, however, have made them the firm favourites to win the title.

CSKA have been resurgent under new manager, Viktor Goncharenko. The club drew Zenit after the winter break, and then won against Tom Tomsk, Terek, and Krylia Sovetov Samara, before drawing Krasnodar away. CSKA are now the favourites to finish second and to reach the Champions League.

Zenit went into the second half of the season as the favourites for the Europa League title, and as the only challenger for Spartak in the league. Both those title challenges evaporated early. Zenit were eliminated by Anderlecht in the Europa League, and they have lost to Amkar Perm, and have drawn to Anzhi Makhachkala. With their title hopes over, Mircea Lucescu will certainly come under question.

FC Krasnodar was once considered the third biggest club in Russian football, but the resurgence of Spartak Moscow now means that position is taken by Spartak. Krasnodar had a good run in Europe, but overall performances have been too inconsistent to challenge for the very top of the table.

The Railwayman have looked better since Eric Stoffelshaus took over as the new sport director of the club. New signings and new tactics have placed Loko back into the Europa League race.

Rostov had an excellent run in Europe. Consequently, the results in the league have suffered somewhat. But with the European run over, Rostov can now focus on the league. Don’t be surprised if Rostov is among the top five teams at the end of the season.

It is a tight race between Terek Grozny and FC Ufa for that fifth spot in the league. Terek have a slight edge at the moment, but this is only thanks to a strong showing on the weekend against Arsenal Tula.

Ufa, for the longest time, appeared to be the surprise team of the season. But losing their manager, Viktor Goncharenko, is now having an impact. Ufa lost 3-1 to Spartak on the weekend and, with Lokomotiv and Rostov resurgent, Ufa, like Grozny, could find themselves further down the table soon.

Sometimes it is easy to forget this tiny club from Siberia. Amkar defeated Zenit on matchday 19, lost to Tom Tomsk, and then drew Terek Grozny and Krylia Sovetov. They definitely finish in mid-table, which will be a strong result for them at the end of the season.

The Uraltsy have been excellent since the winter break. The club from the border between Europe and Asia were able to land midfielder Eric Bicfalvi in the winter break, and the Romanian has been the difference maker. Currently in 12th place, Ural are on an upward trajectory, which makes them ninth in our Russian Football Premier League power ranking.

Anzhi is another club that has been surprising since the winter break. The club from Dagestan went through an ownership change during the winter break, and it was expected that the club would suffer as a result. But, while their results have not always been positive, their performance has been, and their recent 1-1 draw against Zenit was impressive.

The club from Tatarstan is perhaps the biggest disappointment of the season. Major investments and the hiring of Spanish coach Javi Garcia were supposed to herald a new era. Instead, Rubin find themselves in mid-table, and will have little say in the race for the Europa League.

Tula will likely finish in the 12th spot, which would mean a relegation/playoff spot. While they have looked better since the winter break, their performances have been too inconsistent to fully impress, which means that they are ranked 13th in our Russian Football Premier League power ranking.

Orenburg have improved massively since the start of the second half. At the same time, results have not always been kind to them. A 3-0 victory against Arsenal Tula, and a 0-0 draw against Rubin preceeded a 1-0 defeat to Anzhi Makhachkala, and a 3-2 heart-breaking defeat to Spartak Moscow. In both matches, however, Orenburg showed that they can play in the Russian Football Premier League.

One of the most historic teams in Russia will have to turn results around quickly if they do not want to find themselves on the wrong side of the relegation battle. Currently 14th, their trajectory is pointing to straight relegation.

Facing bankruptcy, Tom Tomsk is looking towards a rebuild in the Football National League next season. As a result Tom Tomsk are last in our first ever Russian Football Premier League power ranking.