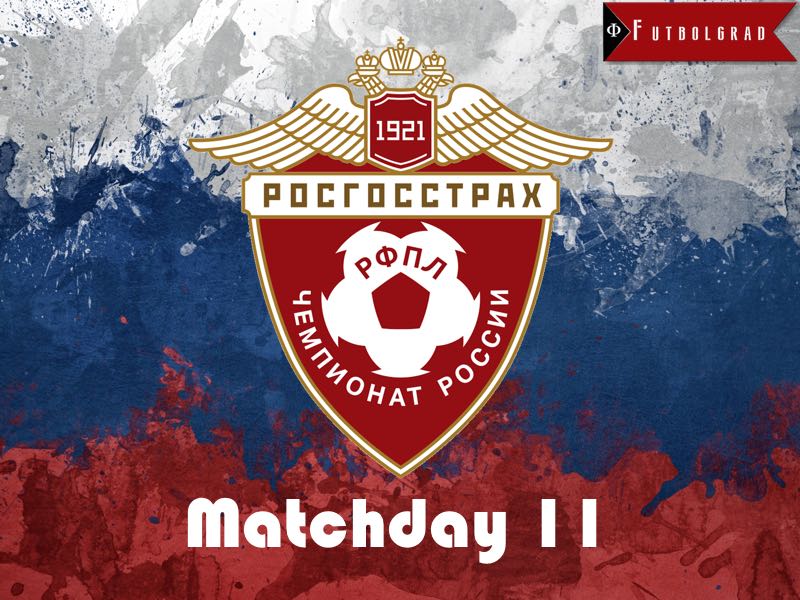 Both clubs had several chances to open the scoring, but ineptitude by the forward lines of both clubs meant that several chances were squandered in the first 60 minutes of the game. Finally it was the Brazilian Maicon, who scored the sole goal in the 65th minute.

The Brazilian received the ball just inside the halfway line, and then dribbled straight through Vasili Berezutsky, and Mário Fernandes before releasing a low shot that beat Igor Akinfeev at the near post. Subsequently CSKA had several chances to equalize the score-line, but Fernandes missed a shot from close range, and Russia’s national team keeper Guilherme did brilliantly to stop Aleksey Ionov from close range.

Lokomotiv’s derby victory was the first win in five matches

This was Lokomotiv’s first win in five matches, and only the club’s second victory since Yuri Semin took over in late August. The result means that Lokomotiv are now 11th in the league, and three points clear off Arsenal Tula, who occupy the first relegation playoff place.

On Friday, Futbolgrad wrote that this could be indeed a good time for Lokomotiv to face their city rivals, as CSKA Moscow had several players battling for match fitness. For Lokomotiv, however, the match highlighted that the club, which last season remained in the top three of the league for much of the year, will have to rely on physical football rather then finesse when it comes to collecting points.

The example of Dinamo Moscow, who were relegated last season for the first time in the club’s history, shows that the Russian Football Premier League can be unforgiving to clubs that are undergoing a restructuring process. Lokomotiv have, for the past two seasons, found themselves in a precarious financial situation, as the Russian Railways, which owns the club, is determined to cut funding for the club.

The funding cuts, and problems with UEFA’s Financial Fair Play regulations, have meant that Lokomotiv largely were inactive on the transfer market in the summer. The most significant signings were striker Igor Portnyagin, and the highly limited defender Boris Rotenburg—his biggest claim to fame is his father, Boris Rotenberg Sr., who is a Russian oligarch and backdoor owner of Dinamo Moscow.

Dinamo Moscow were the latest Moscow-based club to undergo dramatic cuts to the player budget, in an attempt to become more self-sufficient, and comply with UEFA’s Financial Fair Play regulations. What followed was a forgettable season in 2015-16, and subsequent relegation to the Football National League (second division).

Semin’s Lokomotiv will therefore have to set themselves realistic goals for the season, as they are likely to battle against relegation for the remainder of the season.

Meanwhile, at CSKA Moscow, the fans are extremely unhappy with head coach Leonid Slutsky. A group of fans used the Lokomotiv game to hang banners to protest against Slutsky and his management of the club.

The banner that shows Slutsky’s face crossed out appeared for the first time on matchday 10 when CSKA Moscow beat FC Ufa 1-0. There have been suggestions that the banner could be linked with an advertisement that Slutsky had shot in support of the Jewish Culture Centre in Moscow.

CSKA Moscow fans have, in the past, been linked with right-wing ideology, and indeed have been banned by UEFA over racist chants. Hence, it is possible that there is indeed an anti-Semitic undercurrent to fans calling on Slutsky to resign.

At the same time, it appears that, in reality, many fans are simply disappointed in CSKA Moscow’s tactical approaches to football games. Slutsky has been called a tactical coward for his defensive first mentality. Furthermore, many fans are also disappointed with the club’s transfer policy, as CSKA Moscow failed to bring in suitable replacements for the two African strikers Seydou Doumbia, and Ahmed Musa.

CSKA Moscow signed Lacina Traoré on a loan deal from AS Monaco in the summer. But the 203 cm tall striker is not a goal getter, but rather a breaker, who is most effective with a more mobile striking partner. The young Swedish striker Carlos Strandberg could be this player, but Slutsky is reluctant to play him together with Traoré and, as a result, CSKA’s game up front is too slow, and predictable.

Things are made worse by the fact that CSKA can no longer rely on their back four to win low scoring games. Berezutsky, for example, showed once again that he has become too slow for the modern game, as he was simply overrun when Maicon scored his game winner for Lokomotiv.

Slutsky has won three Russian Football Premier League titles, two cups, and two Russian Super Cups with Moscow since taking over in 2009. He was widely celebrated last fall after he successfully qualified the Russian national team for the European Championships in France.

Things unravelled last fall, however, when CSKA Moscow almost lost a convincing lead in the table to upstarts FC Rostov. In many ways, CSKA were lucky that their national competition lacked the consistency to seriously challenge the club for the title. CSKA won the title on the last day of the season with just 51 goals scored in 30 games.

The title, therefore, overshadowed many of CSKA’s tactical problems. But, in many ways, those problems were exposed during Russia’s horrible showing at Euro 2016. Slutsky relied largely on the same defensive pair he had used for CSKA, but Berezutsky and Sergei Ignashevich no longer were up to international standards. Furthermore, Slutsky was reluctant to experiment and grant his players the freedom to express themselves on the pitch.

Slutsky resigned from the national team after the Euros, but there were questions as to whether the tournament could affect his future on the club level. After matchday 11, CSKA Moscow are now third, four points behind Spartak and Zenit but, while both those clubs are experimenting with new tactical approaches, CSKA seems to be going backwards…