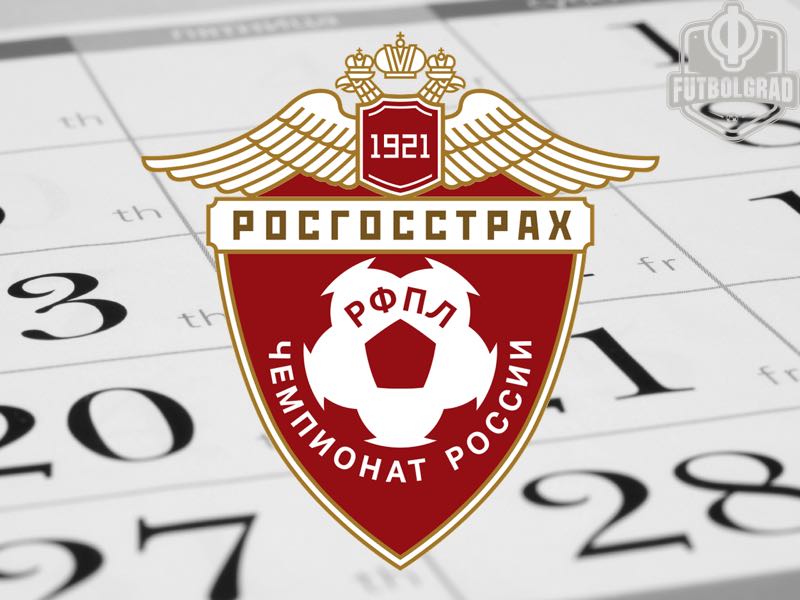 The three months long Russian Football Premier League winter break is here and with it the annual discussion on what to do with the schedule. As it stands Russian clubs will now be on break until March 4, but for Spartak Moscow, CSKA Moscow, Lokomotiv Moscow and Zenit Saint Petersburg the winter break will end earlier— CSKA face Red Star Belgrade on February 13 and Spartak Moscow, against Athletic Bilbao, Lokomotiv, against OGC Nice, and Zenit, against Celtic, will play their round of 32 ties in the Europa League on February 15.

This already represents the biggest problem of the Russian Football Premier League winter break. Clubs will play their first competitive fixture of the new year more than two weeks before their first competitive league game. The opponents of the Russian clubs in the round of 32 of the Europa League, therefore, have a significant advantage in the first knockout stage of the Europa League.

This has been an old problem for Russian football and whether in the old calendar, which saw the league play in the calendar year from spring to fall or in the currently used fall to spring calendar the long winter break cannot be moved due to the realities of the Russian winter. Those are that many of the smaller clubs have facilities that are almost unusable from mid-November till early March. Current examples include newly promoted SKA Khabarovsk, Amkar Perm, Arsenal Tula and Ufa.

It is, therefore, no surprise that the bosses of the Russian football clubs are looking at options to improve the situation and Spartak Moscow President Leonid Fedun has now come forward with some potential changes in a recent interview with the Russian paper Sport-Express.

Speaking to the paper, Fedun believes that the schedule needs to be more flexible in the Russian Football Premier League. “We have about eight clubs that have all-weather facilities from the Southern Federal District, plus Saint Petersburg and Moscow where the stadiums can be used around the year. The calendar could be adjusted so that those clubs will play more home games during the winter months. Such planning would guarantee that we wouldn’t have games in the cold in places like Ufa, Kazan, the Far East in Krasnoyarsk. For example, in December Krasnodar played in Perm. Why was this not scheduled the other way around? Change is easy, but the league has not complied.”

Leonid Fedun’s proposal is easy—make the Russian Football Premier League calendar more flexible and rather than having a home and away schedule like it is the case in the German Bundesliga have the schedule drawn up by climate instead. But those reforms do not go far enough in the eyes of Leonid Fedun.

The Spartak Moscow owner also believes that the format of the league needs a significant overhaul. He thinks that the league should be reduced to 14 teams by 2019-20 season and that licencing like it is the case in North American sports, should also take into consideration average stadium attendance. “The competition could be carried out in the following formula: 26 rounds would be held before the winter break, some of which, perhaps five or six rounds, would be played on Wednesdays like it is the case in Europe. After that teams would be divided into two groups of seven. The first group would play for the title and the European places and the second group against relegation.”

Leonid Fedun believes that this format would not only make the league more competitive but would also give the big clubs more home games against their biggest rivals. Spartak’s owner believes that the current format with just 15 home games is not enough for the big clubs to recuperate all the loses made from building new facilities in preparation for the World Cup. His new format would not only increase the number of home games to 19 but also would see the big clubs play each other more often, which in turn would increase attendance numbers.

Fedun, of course, admits that some of the smaller clubs could fight his proposal. At the same time, the Spartak Moscow owner could be onto something. The reduction of teams and change of the league schedule would make it harder for smaller clubs with poor infrastructure to compete in the short-term. At the same time, it could become an impetus for more clubs to introduce professional structures to maintain their licence to play in the top division.

Furthermore, Russia is currently in the process of finishing up several World Cup stadiums that do not have teams in the Russian Football Premier League. These arenas would be available year-round and provide the comfort to see further attendance grow in the Russian Football Premier League. Changes to the schedule and more teams playing in those facilities would allow the league to shorten the winter break, which in turn could help Russian clubs to be more competitive in European competitions.