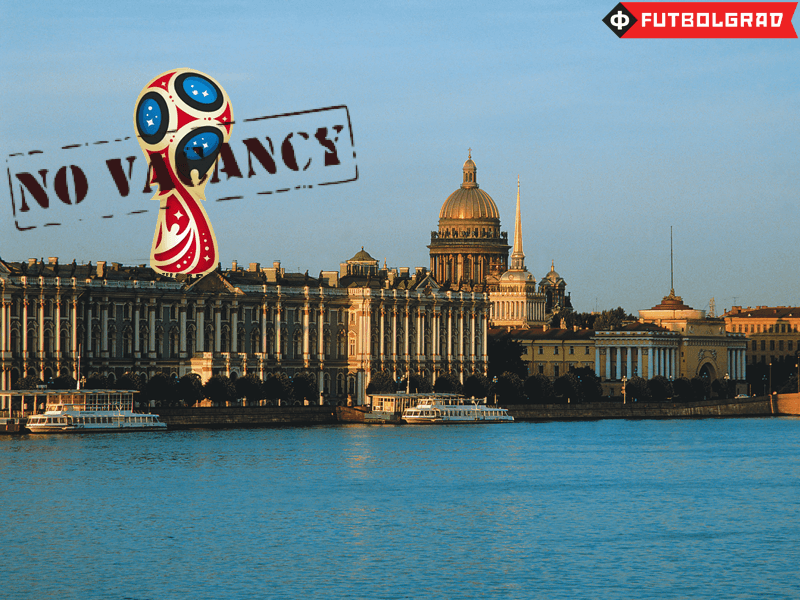 Aleksei Musakin, the director of the Russian Hotel Association, is worried by the lack of progress in Saint Petersburg’s preparations for the 2018 World Cup.

The demands placed on Moscow and St. Petersburg, the hosts of the World Cup semi-finals, are greater than those placed on other cities. FIFA insist that these cities must provide four hotels next to the main stadium with a capacity of no less than 100 rooms each. Furthermore Moscow and Saint Petersburg must each have 40 hotels with a total capacity of 10,000 rooms in the two to three star categories and only one that is more than three stars.

Musakin stated “Saint Petersburg, is slow as always and then they suddenly cancel [the requirement to obtain an official mark of quality]. Hoteliers consider that when the month ends, there will be a quick distribution of stars, which will be much easier to obtain than the two-week training and complex procedures. If this happens, I will be one of the first to write a complaint to the Federal Service [for Supervision of Consumer Rights Protection and Human Welfare].”

According to Musakin it costs between 65,000₽ and 150,000₽, depending on the hotel, to obtain the correct qualification. The deadline to meet the requirements is July 2016 but Musakin believes that not all hotels will be able to meet the deadline.

“In our country it is possible to do it [receive the correct qualification] in one night but it will be crooked, especially among the smaller hotels. Even now there are no people to examine the hotels, some of them are going to all eleven World Cup host cities. It is difficult to find them and you have to wait three weeks for them.”

Saint Petersburg is far behind other Russian cities in its accommodation preparations for the World Cup. Volgograd already has 75% of its hotels certified whilst Moscow has around 50% ready. When compared to Saint Petersburg, where only 10% of the Hotels are ready, it is easy to see why Musakin is concerned.

Furthermore, according to statistics obtained by Rusnovosti and the Federal Antimonopoly Service of Saint Petersburg, eleven of the already completed hotels in the city do not have the required number of stars. This could have led to hotel owners facing a fine of up to 500,000₽.

Many of them will now be able to avoid this, as according to a new law, a warning is issued to those who are not in line with the regulations and if the establishment then proceeds to come into line, the case against them is lifted and no fine is imposed. This shows the desperation to increase the speed of certifications, even if it means cutting corners.

With ongoing issues at the New Zenit Arena, the hotel certification issue is only the latest setback to Saint Petersburg’s World Cup preparations. The local authority was forced to step in after Gazprom withdrew their funding from the New Zenit Arena and it seems that once again they may have to step in.