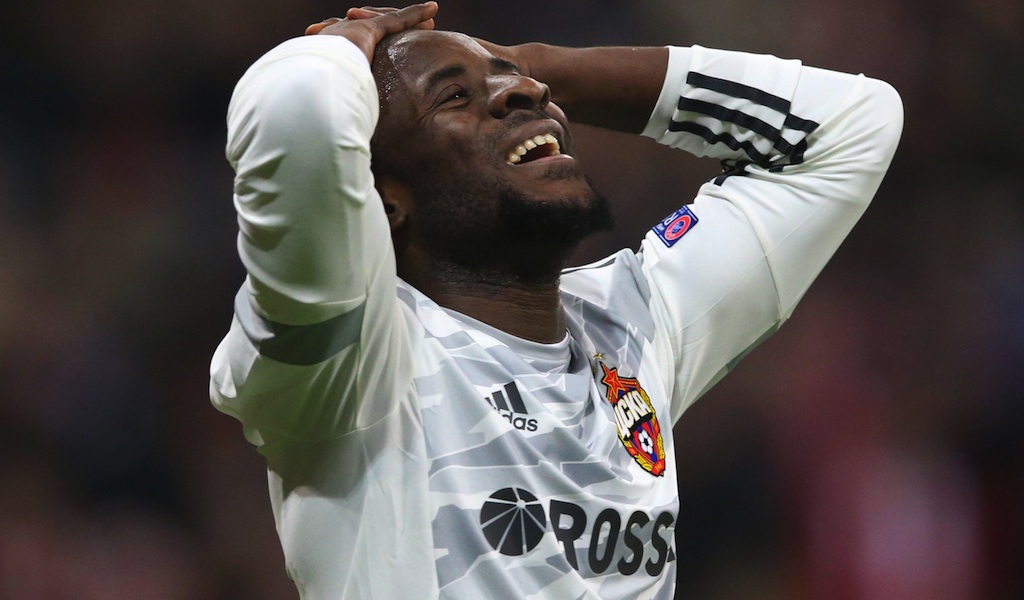 Seydou Doumbia – Back To The Future At CSKA Moscow?

Seydou Doumbia had been a part of CSKA Moscow for five years when he was sold in the 2014/15 winter transfer window. Like many clubs in the Russian Premier League, CSKA Moscow was feeling financially overextended due to the Russian Rouble Crisis.

As a result CSKA Moscow talked its players into signing a memorandum, which artificially lowered the exchange rates from Euros, and Dollars to Roubles in order to lower the wages of players who received their pay in foreign currency. Brazilian defender Mario Fernandes, who spoke for his teammates, stated that all team members agreed that it was the right thing to do for the betterment of the club..

Despite the positive effect of this action on the club budget the Red Army team was also forced to sell its star and top scorer Seydou Doumbia to AS Roma for €14.4 million in order to ensure that the club complied with UEFA’s Financial Fair Play regulations.

Doumbia, however, has struggled with his play since joining AS Roma in January 2015: Doumbia had managed seven goals in 13 games for CSKA Moscow last season with an average rating of 6.94 at Whoscored.com and he was ranked fourth in the Futbolgrad Top 30 in January. After moving to AS Roma, however, his rating dropped to 6.36 as he only managed two goals in 13 Serie A appearances for the Italian club. As a result, Doumbia’s market value collapsed from €25 million in January to €15 million in June.

Now it appears that Doumbia may be on the transfer list once again as AS Roma is looking to bolster its offence with new attacking players—with Edin Dzeko, Andriy Yarmolenko, and Juan Cuadrado all rumoured to be possible replacements should Seydou Doumbia leave AS Roma.

Last week it appeared that Doumbia would leave Roma for England where he was rumoured to sign with either FC Watford, which has just been promoted to the English Premier League, or with West Ham United.

Then on Saturday, reports from Russia suggested that Doumbia could be on his way back to CSKA Moscow. When asked whether Doumbia would return to CSKA Moscow, the General Director of the club, Roman Babayev, said: “a huge number of clubs are interested in signing Doumbia, but if there is some kind of a reasonable and appropriate option, then why would we not try to sign him. But the position of Roma is categorical, they only want to sell him [and not loan him out]”.

Several CSKA players were also positive about a possible return of their former teammate. The midfielder Roman Eremenko, for example, stated to Sport-Express that he believes a return to Moscow for Doumbia is quite a realistic option. CSKA’s Nigerian striker Ahmed Musa was equally enthusiastic and said “if Doumbia returns, I will be happy. Like everyone at CSKA.” He further added: “Personally, I miss him terribly! And not only me, but all of us. If he comes back, we’ll be just as happy. And most importantly, he is, in my opinion, very good for the team.”

That CSKA’s management is now considering a return for Doumbia is only made possible by the fact that financial circumstances have improved for Russian football. Also, Changes to UEFA’s Financial Fair Play regulations mean a bit more breathing room for clubs like CSKA, which unlike their city rival Dinamo, are considered well managed. In addition, Doumbia’s drop in market value means that the Ivorian could conceivably accept a wage cut in order to return to Moscow. While Doumbia might be able to earn more by playing for an English Premier league club, CSKA’s participation in next season’s Champions League could just be the ace in CSKA’s sleeve that will secure the signature of the striker.