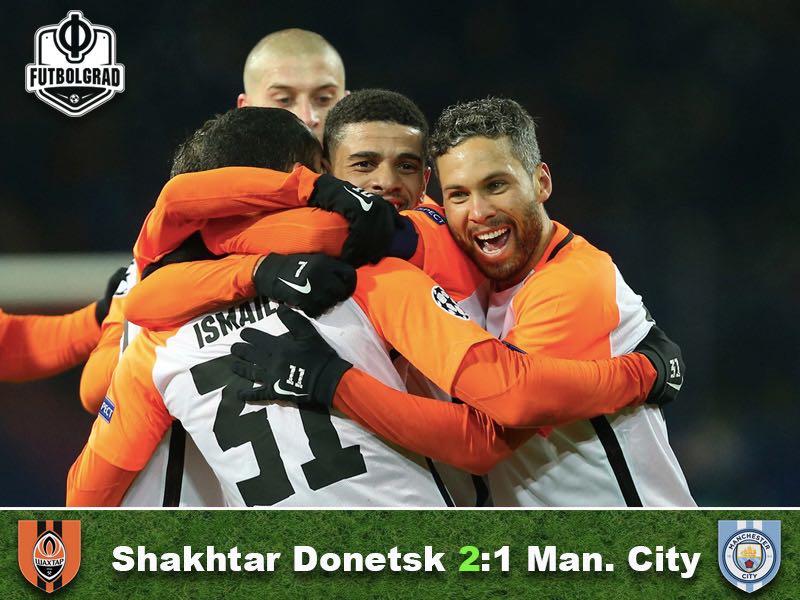 Shakhtar Donetsk v Manchester City ended with the Miners earning a place in the Round of 16 as the Ukrainians defeated a weakened and inexperienced Manchester City team.

In a match where Napoli needed to win against Feyenoord, as well as some help from the Citizens, to secure a place in the Round of 16, everything went horribly wrong for the Italians. The match in Rotterdam ended 2-1, where Feyenoord scored a late winner, while Shakhtar Donetsk turned some heads as the Ukrainians defeated Manchester City, handing the English club its first loss in the 2017/18 season.

Needing a point to guarantee qualification into the Champions League knockout stages, Shakhtar Donetsk had a very strong lineup. In contrast, Manchester City, who had already won Group F and a place in the Round of 16, fielded a weak side. As expected, Manager Pep Guardiola handed Phil Foden and Tosin Adarabioyo their first full senior debuts, while out-of-favour Eliaquim Mangala, Danilo, and Yaya Touré also started.

The lack of Manchester City’s intensity, and perhaps interest in this fixture, was very apparent at the start of the match, where Shakhtar had an early attempt to take the lead in the 7 minute, if not for a deflected shot off of Fernandinho. The Miners then had a second opportunity in the 21 minute, where a Shakhtar counter-attack caught the inexperienced citizen defence off-guard, yet Taison’s curler was collected comfortably by Ederson.

The Ukrainians finally had the breakthrough in the 26 minute after Marlos laid the ball off to Bernard, who then curled the ball into the top corner. Shakhtar then doubled their unlikely lead six minutes later when Marlos delivered a deep ball into Manchester City’s half. Ederson raced off his line and attempted to clear the ball, but the ball took an awkward bounce and the City goalkeeper blundered his opportunity. An unchallenged Ismaily then rolled the ball into the empty net, leaving Guardiola furious and the Citizens a mountain to climb.

Manchester City’s Gabriel Jesus nearly brought his side back into the match near the cusp of halftime, but the striker lost the ball in a one-on-one situation with Andriy Pyatov, which was also the talking point of the match. The Citizens were unable to break Shakhtar’s backline and the match ended 2-0 at halftime.

Manchester City started the brighter of the two sides in the second half, where Pyatov made a crucial save to deny Leroy Sané in the 46 minute, thus maintaining his side’s two-goal cushion. Fernandinho and Bernardo Silva then nearly scored in the 55 minute, yet once again the Ukrainian goalkeeper kept the Citizens at bay.

As the match grew on, it was very apparent that Guardiola’s men were much more interested in the crucial Manchester Derby this upcoming Sunday rather than this Champions League fixture. Guardiola eventually introduced Brahim Diaz and Sergio Agüero into the match to salvage something from the match, and Jesus nearly found the breakthrough in the 79. The youngster’s effort, however, bounced off the back post and came to nothing.

Manchester City finally found their goal, courtesy of some careless defending from the Ukrainians. Jesus was brought down inside of the box and the referee had no choice but to award a kick from the spot. Manchester City’s all-time goal scorer Agüero then smashed the penalty into the top right corner, but unlike its recent fixtures, the English side was unable to find another late goal to claim a result in this match.

Shakhtar Donetsk will now regroup and prepare for their long winter break while Manchester City will hope to bounce back from this lack lust performance. The Citizens will face Manchester United on Sunday, where many pendants have predicted that the derby’s result will determine the fate of 2017/18 Premier League season, despite it only being December.

Marlos provided the assists for both of Shakhtar’s crucial goals, and his involvement in the match handed the Miners a well-earned victory which secured their place in the Round of 16. The Brazilian-born Ukrainian midfielder played superbly throughout the match, and the Ukrainians will have much to celebrate during the upcoming holiday season. 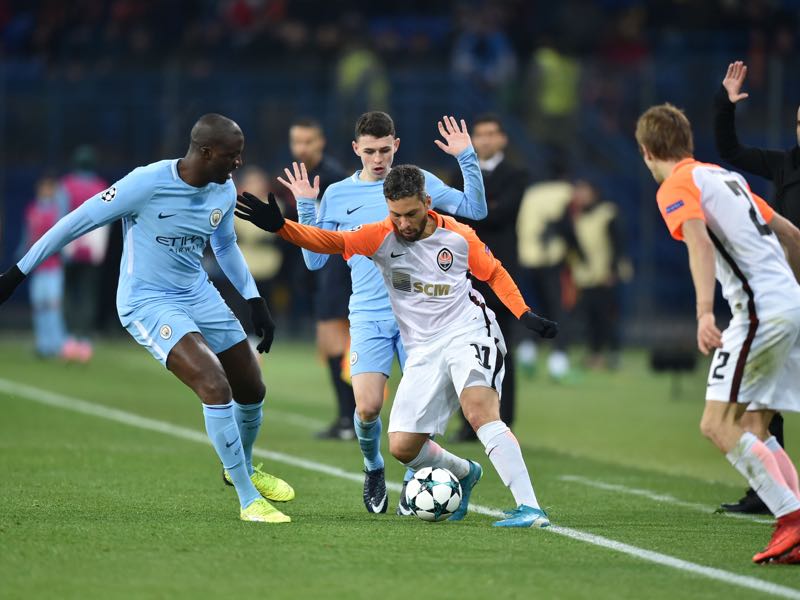 Marlos, here surrounded by a sea of City players, was the man of the match. (GENYA SAVILOV/AFP/Getty Images)

The Miners exploited a rather weak and inexperienced Manchester City defence, and City forward Gabriel Jesus will feel troubled by the number of his spurned chances, particularly in the 42’. The young Brazilian had a one-on-one opportunity with Shakhtar goalkeeper Andriy Pyatov, but was too clever with the ball blundered his opportunity to net a goal. Had he scored, Shakhtar would have led 2-1 at halftime, though the match may have ended very differently by full time.