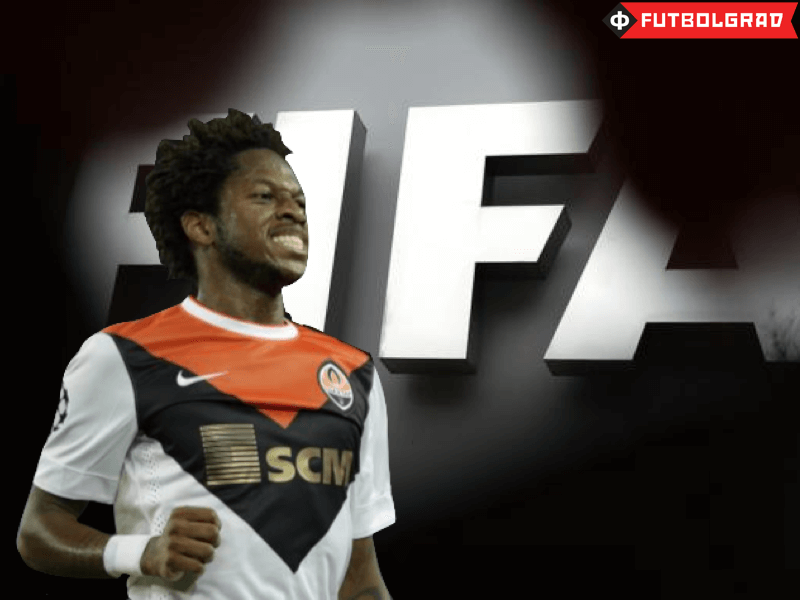 Shakhtar Donetsk remains in the news. Just a day after the club sold their star striker Alex Teixeira to the Chinese Super League club Jiangsu Suning for €50 million, the club has lost another Brazilian player, as FIFA today announced the suspension of Shakhtar’s midfielder Fred.

Fred first failed a doping test back in July during the Copa America, testing positive for a banned substance used to mask traces of illegal drugs in urine. He then failed a secondary test, but as neither UEFA nor FIFA took any action to formally sanction him, Fred continued to feature in the Shakhtar squad all season.

The South American Football Confederation CONMEBOL, on the other hand, immediately banned Fred for one year, but the player was still allowed to appear in Ukrainian Premier League matches, as well as in UEFA competitions.

Now, however, FIFA announced in an official statement on their homepage that: “The Chairman of the FIFA Disciplinary Committee has decided to extend the sanctions imposed on 14 December 2015 by the disciplinary committee of the South American Football Confederation (CONMEBOL) on the Brazilian player Frederico Rodrigues de Paula Santos [Fred] for an anti-doping rule violation to have worldwide effect in accordance with article 136 ff. of the FIFA Disciplinary Code.”

The announcement read further “As a consequence, Mr Rodrigues de Paula Santos is suspended worldwide for one (1) year as of 27 June 2015 in accordance with the terms of the decision passed by the disciplinary committee of CONMEBOL. This suspension covers all types of matches, including domestic, international, friendly and official fixtures.”

Finally, FIFA wrote “Mr Rodrigues de Paula Santos [Fred], his club FC Shakhtar Donetsk, the CBF, the Football Federation of Ukraine, CONMEBOL and UEFA have today all been notified of the decision of the chairman of the FIFA Disciplinary Committee.”

For Shakhtar this means that Fred will now be suspended until June 27, 2016, and will therefore miss the remainder of the season, including Shakhtar’s Europa League encounter with FC Schalke 04.

Yet both Shakhtar and Fred have been fortunate that CONMEBOL and FIFA have not extended the suspension out to the possible four years that can be applied for players that have failed a doping test. Furthermore, Shakhtar was also able to use the player in the Champions League, and Ukrainian Premier League matches.

The Turkish club Fenerbahçe even filed an appeal after Shakhtar defeated the Turks in the third round of the UEFA Champions League qualification stage. Fenerbahçe argued that the result should not have stood because of Fred’s positive doping test, but UEFA declined the appeal, as it had no legal basis.

It will be interesting to see how Shakhtar will react to this new situation, and while Shakhtar had to already register its squad for the remaining Europa League season, the club could in theory still bring in re-enforcement for the remaining Ukrainian Premier League season as the transfer window in Ukraine remains open until March 1.

How will Shakhtar react to this latest news? After Teixeira’s transfer to China Shakhtar’s CEO Sergey Palkin told the media that: “we must make way for our players in the academy.” This was, however, before FIFA announced that Fred would be suspended for the remainder of the season, and it would therefore not be surprising if the club would react to this second loss by looking for a new player further afield.