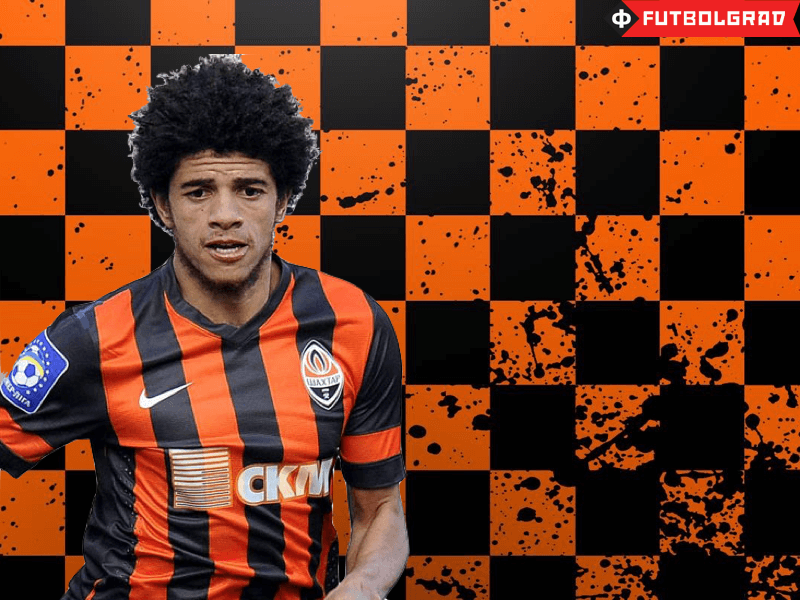 Shakhtar’s Taison is Looking For a New Challenge

These are decisive weeks for Shakhtar Donetsk, as the Ukrainian club still has a chance to win three titles this season. But while Shakhtar managed a 2-1 win in Braga against Sporting Braga on Thursday and now have a great chance to reach the semi-final next Thursday in Lviv, the league title seems to slowly slip away.

Shakhtar were three points below league rival Dynamo Kyiv going into this weekend—having surprisingly lost to Dnipro Dnipropetrovsk 4-1 a few weeks ago. Then on Sunday Shakhtar played Stal Dniprodzerzhynsk, but what should have been an easy win for the Miners turned out to be a major disappointment as Shakhtar only managed a 3-3 tie.

A victory by Dynamo Kyiv against Volyn Lutsk on Sunday meant that Shakhtar are now five points behind the current titleholders from Kyiv. Furthermore, Dynamo’s performances this season make it unlikely for Dynamo to drop enough points in the remaining games for Shakhtar to win the title this season. Perhaps Shakhtar’s last hope is a victory in the all-Ukrainian Derby on match day 24, but at that point a victory might be too little to late.

Hence, Shakhtar will now try to focus on reaching the next stage of the Europa League, and perhaps even try to win that title—a Europa League victory would guarantee a spot in the group stage of the UEFA Champions League next season.

One player who was absent during Shakhtar’s 3-3 tie against Stal was the Brazilian winger Taison. Taison has been battling small injuries since the winter break, and according to Tribuna was rested by Shakhtar coach Mircea Lucescu for the return match against Braga.

Taison seemed to have made good use of his time off by speaking to the Brazilian media outlet Globo, which he told that he was now ready to make a step to a different European championship. 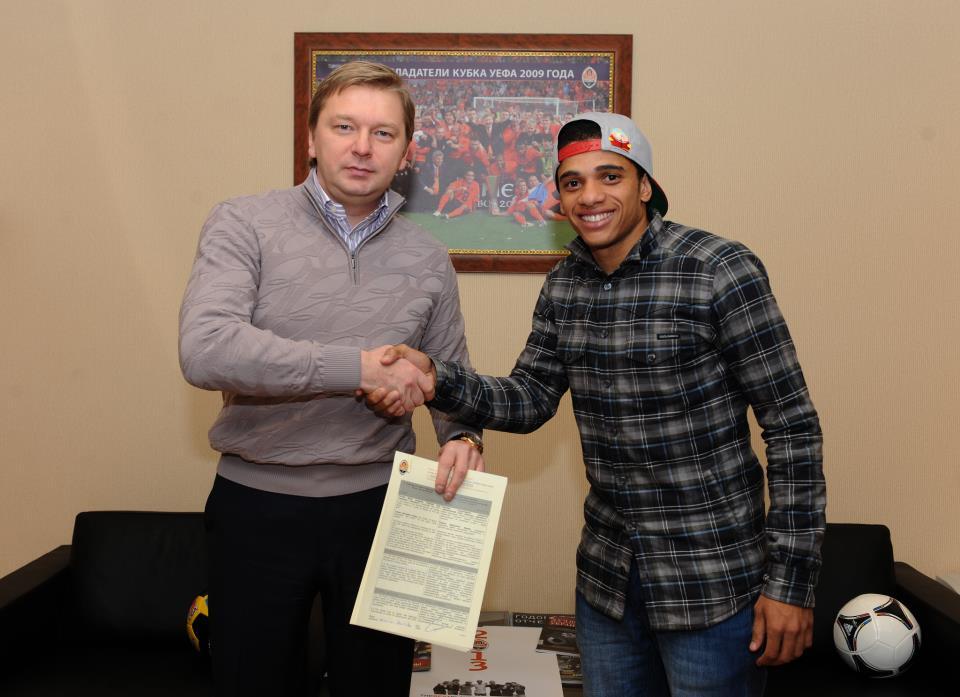 Taison (right) has played in Ukraine for six years now – Image via ua-football.com

“I have played six years in Ukraine [for Metalist Kharkiv and Shakhtar Donetsk], and it is time to make a big step forward. I always dreamed of playing in the English league, but leaving will not be easy, yet I feel that the club will understand me and support.” Taison also revealed that in the past he had an offer from Chelsea FC, but that Shakhtar blocked the move.

At the same time he admits that he still has a two-year contract, and that it will be up to Shakhtar whether they will allow him to leave. “I cannot complain about the club. They take care of everything, and perform all obligations. They always pay on time. In fact, I am very grateful for all.”

Taison also revealed that his agent had offers from Atlético Madrid, and Benfica Lisbon. Taison understands though that it will be up to him whether a move will materialize “I have to perform well in the Europa League, and then offers will come.”

Mircea Lucescu has since told Tribuna that he can understand Taison’s desire for wanting to play in a bigger league, especially given the fact that the Ukrainian Premier League has regressed as a competition in the last two years. “Taison is now at a level where he can play in a stronger league. If he has a good offer, why shouldn’t a player dream, especially since he is already 28 years old? Everybody wants something better.”

At the same time, however, Lucescu pointed out that Taison is still under contract at Shakhtar, and that any club wanting to secure his services would have to make a very good offer. “Taison is now our best player in attack, and we will assess his situation at the end of the season.”

Indeed Taison has been one of the top performers at the club this season. What has become especially evident are his speed and his direct movement to the opposition goal. In some ways his playing style is similar to that of his former teammate Douglas Costa, who is now at Bayern Munich. At the same time it is evident that the two wingers used to compliment each other, because where Costa looked for a pass, Taison looks to shoot.

With 1.8 shots per game in the Europa League Taison—together with Viktor Kovalenko—has the most shots for the team in the tournament. Taison has reached an average whoscored.com score of 7.49 in all Europa League matches so far, and has also scored six goals in 14 Ukrainian Premier League matches.

Is There a Market for Taison?

At the same time it is doubtful whether a big European team would be willing to spend big money for the Brazilian winger. Taison is currently valued at €14 million, but at 28 years old is no longer the type of player to make significant steps in his development.

Meanwhile Shakhtar have in the past demonstrated that they are a tough negotiation partner—see Liverpool’s failed bit to secure Alex Teixeira—and will therefore be unlikely to sell Taison for less than his market value.

This would make a move to Benfica Lisbon—or any other Portuguese club—unlikely, as Portuguese clubs often buy with an eye to sell players with a profit in the future. Given Taison’s age and price tag, this makes any future profit from a transfer almost impossible.

Spain could be another possible destination, but Atlético Madrid have been handed a transfer suspension by FIFA for signing underage players. This suspension has been temporarily lifted pending the decision of the FIFA appeals committee. Ultimately it seems likely, however, that Atlético could be banned from making transfers next summer.

Next to Real Madrid, FC Barcelona, and Atlético, the only club in Spain capable of burning €14 million plus on a 28 year old winger would be Valencia CF. But Valencia are currently struggling against relegation, and will definitely not play Champions League football next season.

Another destination could be England, where clubs fuelled by enormous television money could be willing to take a bet on the speedy winger. In fact Taison’s play could work in England where pace and running often beats technical finesse. 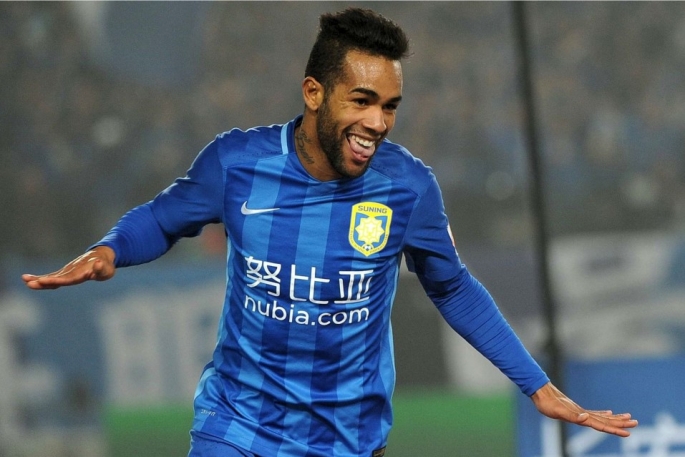 Last but not least Taison could also swap his dream from a move to a big European league with a large check signed by a Chinese Super League club. After all China’s football clubs have been big spenders already this last transfer window, and several clubs could be interested. But what about Taison’s statement about wanting to play in a bigger league? Well he wouldn’t be the first to go back on his statement…

What Would A Departure Mean for Shakhtar?

For Shakhtar this means that yet another big name player is likely to leave the club. Shakhtar have made a big deal of the fact that they want to produce more Ukrainian players to give the team a more local flavour. Indeed several young players such as Kovalenko are playing well, but it is doubtful whether they can maintain their form without some of the more experienced players around them.

Indeed Shakhtar might want to look at Dnipro as a warning. Last season Dnipro Dnipropetrovsk reached the final of the Europa League, and then saw the departure of several key players. Furthermore, financial difficulties have meant that Dnipro were banned from European football for next season by UEFA.

Shakhtar’s performances in the Europa League have meant that several European clubs have expressed interests in players such as Taison. At the same time the club has suffered from their Europa League run in the domestic league, and might now be faced with losing several more key players next summer.

Surely Shakhtar will not face the same fate as Dnipro, but it will be interesting to watch how much financial support owner Rinat Akhmetov will give Shakhtar to rebuild a team that has seen a steady stream of departures over the last two seasons.