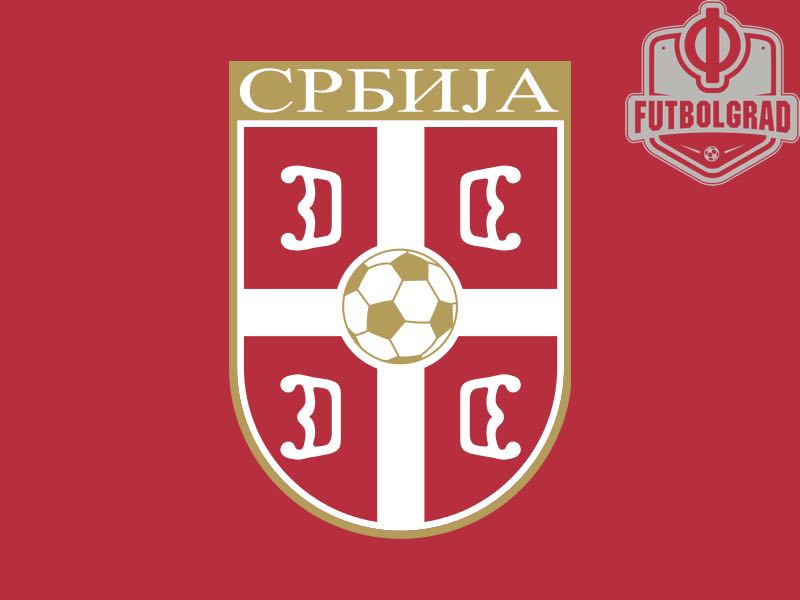 A few weeks ago, I sat down and commenced writing a piece on how the unfashionable Slavoljub Muslin had taken Serbia out of international exile and qualified the national team for their first major tournament since 2010. The 64-year-old coaching journeyman had held 20 managerial posts over the past 28 years in nine different countries, most notably coaching future World Cup winners Christophe Dugarry, Bixente Lizarazu and Zinedine Zidane at Bordeaux during the mid-90s. No sooner had I finished the piece, news broke out that Muslin’s position was in doubt.

On October 30, less than three weeks after guiding the Eagles to Russia, Muslin’s contract was terminated by the Serbian Football Federation (FSS). His assistant and former Bundesliga-winning defender Mladen Krstajić was named as his interim replacement for the national team’s two friendly games in East Asia this month. Slavoljub Muslin and his ‘negative’ tactics as well as refusal to call up Lazio star Sergej Milinković-Savić appear to have been the two contributing factors behind his shock axing. The former Lokomotiv Moscow-manager told Serbian media that “we parted ways because we didn’t think alike on how the team should look for the World Cup in Russia”. 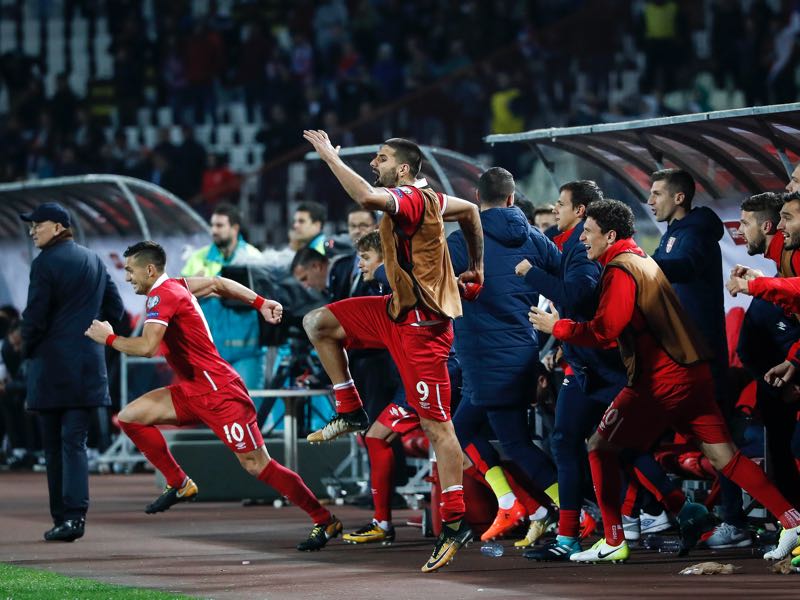 Muslin’s departure makes it ten managers in the last ten years for a national team characterised by its instability and underachievement. Instead of writing about how he changed all that by inserting pride in the national colours seldom seen since Montenegro’s break-away from Serbia eleven years ago, the narrative has quickly changed to an all too familiar one. Despite being placed in a group which contained three Euro 2016 finalists, including surprise packets Wales, Serbia did well to secure top spot in the group and book their tickets to Russia next summer.

Slavoljub Muslin – His Football got the Job Done

While not always pretty, Muslin got the best out of English Premier League pair Aleksandar Mitrović and Dusan Tadić – the latterly considered persona non-grata by previous national team manager Radovan Ćurčić. From the 26 goals netted in the 15 games of the Slavoljub Muslin era, Mitrović and Tadić had scored 14 between them with the Southampton winger grabbing numerous assists in the process. Like the duo, Manchester United midfielder Nemanja Matić was beginning to find his best form for Serbia while veterans Branislav Ivanović and Aleksandar Kolarov provided crucial leadership experience at the back and benefitted from their moves away from the fast-paced nature of England’s top flight.

Hamburg winger Filip Kostić, Napoli defender Nikola Maksimović and Crystal Palace midfielder Luka Milivojević had established themselves in national colours while goalkeeper Vladimir Stojković, defenders Antonio Rukavina and Dusko Tošić and Chinese-based midfielder Nemanja Gudelj proved to be valuable contributors over the course of the campaign. Schalke 04 centre-back Matija Nastasić had recovered from a serious injury to play his part in qualification while the mercurial Adem Ljajić came into equation later on in the qualifiers as did new national hero Aleksandar Prijović, with the former Swiss youth international netting the crucial goal against Georgia in Belgrade.

Such momentum has ground to a halt in the wake of Slavoljub Muslin’s departure with many pointing the finger of blame at FSS president Slaviša Kokeza for parting company with only the second man to steer the Serbs to a major tournament in eleven years. The first man to do so – Radovan Antić – was dismissed for his difference with Kokeza’s predecessor Tomislav Karadžić, a deeply divisive figure in Serbian football. Now the attention turns as to whom replaces Muslin in the vacant hot seat.

Former national team skipper Dragan Stojković is the populists’ choice but recently extended his contract with Guangzhou R&F while another popular figure Veljko Paunović – the mastermind behind the U-20s World Cup triumph in New Zealand two years ago – appears content with his role as manager of the Chicago Fire in the MLS. Fulham’s Slavisa Jokanović achieved promotion to the English Premier League with Watford in 2015 but is happy in West London despite the emergence of cracks in his relationship with the club hierarchy. Foreigners Robert Prosinečki and Vladimir Weiss have been sounded out without much fanfare while the likes of Ivan Jovanović and Milovan Rajevac are two other potential candidates.

No one is seemingly willing to take up a position which is proving to be a poisoned chalice for numerous managers with some outside factors appearing to exert undue influence on the national team. Such a condition is all too common in the Balkans with Muslin’s unwillingness to call up Milinković-Savić winning him few admirers in the corridors of the FSS. The player’s agent is former national team striker and Chelsea forward Mateja Kežman who has barged verbal blows with Muslin in the press since his sacking last month with court action now being threatened by the departed manager.

Criticisms of his style of play and ‘dour’ football need to be considered in the context of international football at the moment. The low-scoring nature of the World Cup playoffs in addition to Portugal’s victory at the Euros last year shows that reactive, defensive-minded football is the norm across the international stage of late. Aside from their lopsided victories over Portugal and Brazil in 2014, Germany’s four other victories in the tournament yield five goals in 420 minutes. Spain’s victorious teams in both 2010 and 2012 were criticised for not being overly entertaining with their triumph in South Africa characterised by four 1-0 wins in the knockout stages of the competition. Serbia’s 1-0 victory over a rugged Republic of Ireland side in Dublin in September and the subsequent win over Georgia may not have been pretty on the eye but ultimately proved effective. 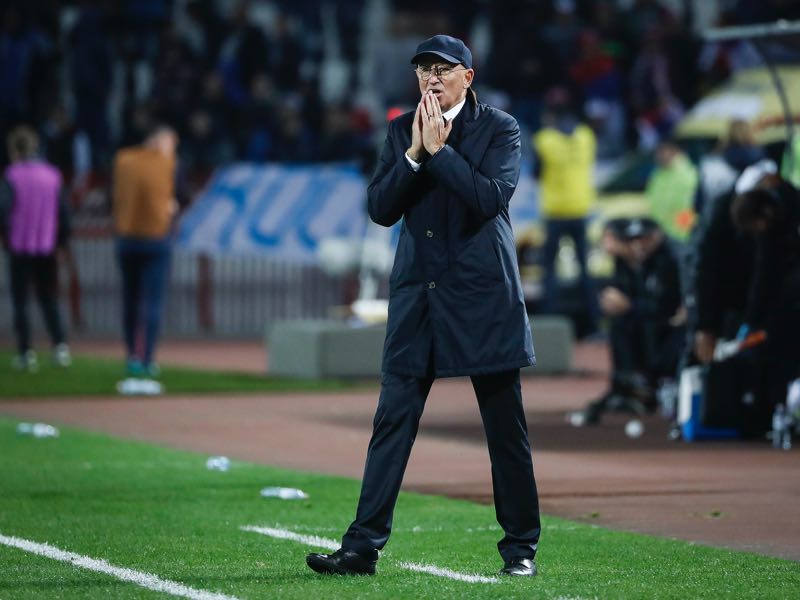 Despite taking his country to Russia Slavoljub Muslin was fired on October 30. (Photo by Srdjan Stevanovic/Getty Images)

With the World Cup draw now just a few weeks away, the Eagles are back to square one as the search for a new manager continues. Serbia is the lowest ranked team from Europe at the tournament and will be placed in pot 4, meaning they will potentially face an uphill task to qualify for the knockout stages of the competition. Despite possessing one of the most talented squads in Europe, with many emerging youngsters knocking on the door for a starting XI role, optimism in the Balkan nation has decreased since qualification was achieved at the Marakana in Belgrade last month. While Serbian club football is experiencing a resurgence of late given both Partizan and Red Star have qualified for the Europa League group stage for the first time, it appears to be more of the same for the national side who have once again seemingly managed to shoot themselves in the foot.

Perhaps the final word is left to Stojković who in an interview with cult blog site In Bed with Maradona in 2011 said the following about potentially one day returning and managing the national team. “There is no feeling of responsibility and no professional mindset. People don’t do their jobs; they want to do something different. They don’t know how to do it, but they put their noses in the wrong place. This is the problem of the region. The president of the FA doesn’t qualify for the World Cup – the players qualify for the World Cup. They want to put themselves on the front page.” Former Manchester United captain Nemanja Vidić echoed such sentiments recently in an interview with Serbian TV by suggesting outside pressures always caused distractions for the players on the field. Whether it was the secession of Montenegro away from Serbia on the eve of the 2006 edition or the straining of relations between Antić and Karadžić four years later, off-field upheaval continues to play a major role in the underachievement of one of Europe’s sleeping giants.