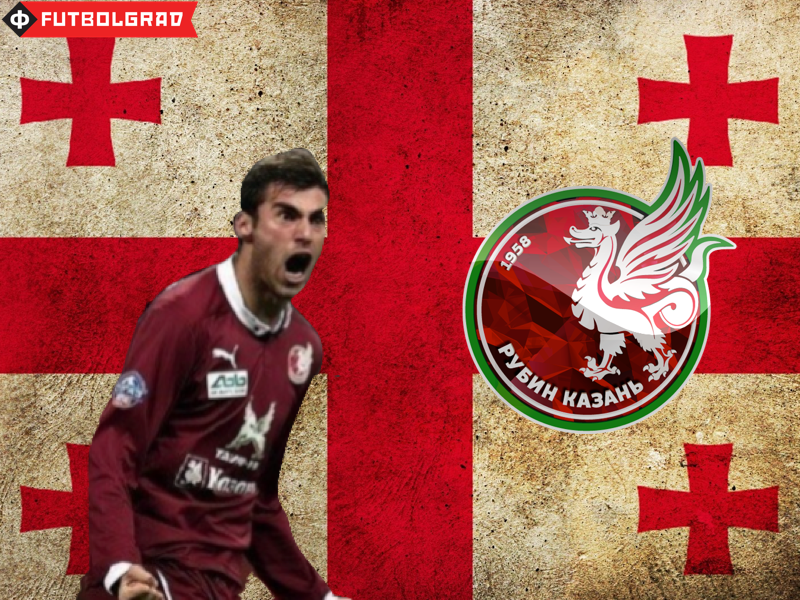 In a recent interview with Georgian sports portal sportall.ge, Rubin Kazan defender Solomon Kverkvelia (or Kvirkvelia, a topic of debate which could go on for some time) confirmed persistent rumours by admitting that some of the clubs who have watched and contacted him over recent months included the European giants Sevilla, Napoli, and Borussia Dortmund, and two unnamed English Premier League sides.

This revelation will not surprise those who are familiar with Kverkvelia, especially because over the last couple of seasons the 23 year old centre back has matured very quickly into one of the Russian Premier League’s top centre halves.

Despite some excellent displays in the Europa League and for Georgia in the European qualifers, many European fans are unfamiliar with Kverkvelia.

He hails from Samtredia, (the same town where Georgian football legend and current Deputy Prime Minister Kakha Kaladze was born), and was rejected by a number of Georgian sides as a teenager. After failing to get ahead in Georgia, he and his family moved to Russia, and he was given a chance at the Zenit Saint Petersburg’s academy. After only 6 months with Zenit’s reserve side, Kverkvelia was signed for an inital 6 month deal by Rubin Kazan in 2011.

Standing at 195cm, Kverkvelia is a gangly looking player, and David James observed in BT Sport’s pre-match coverage of Rubin’s Europa League game with Liverpool FC, “Kverkvelia is a big guy and he’s slow and that’s something for Liverpool to exploit”. This statement was evidence that David James had yet to see Kverkvelia in action. Despite his frame, Kverkvelia is one of the quickest centre backs around, and in his match ups with pacey strikers such as CSKA Moscow’s Ahmed Musa and Seydou Doumbia, he has used his combination of speed and strength to win the kind of head to head duels that most defenders dread. Kverkvelia went on to prove James wrong—he and Ruslan Kambolov had the game of their lives at Anfield and held on to a memorable 1-1 draw.

It is hard to compare Kverkvelia with any other defender in memory. This combination of speed and height is rare in itself, but alongside these attributes, Kverkvelia also posseses excellent defending skills, particularly sliding tackles, where he often uses his long legs to steal the ball back at the last second. He also shows little fear, and will throw himself in the way of any shot that might be coming at the goal.

As with any young defender, there are things to fine tune. He might lack composure in some defending situations, most notably when trying to shield the ball out for a goal kick, but he is certainly improving in this sense, and, in these situations, is learning to use his frame to his advantage.

Having proved himself in Russia, and with some excellent displays in the Europa League now under his belt, he has taken another step up in terms of the level at which he seem is capable of playing. If he does manage to seal a move to one of Europe’s big clubs, it will be very interesting to see how he will fare. Physically he should be able to cope with the pace and physicality of the top leagues, but whether he possesses the skill needed to play successfully for one of Europe’s top leagues remains to be seen.