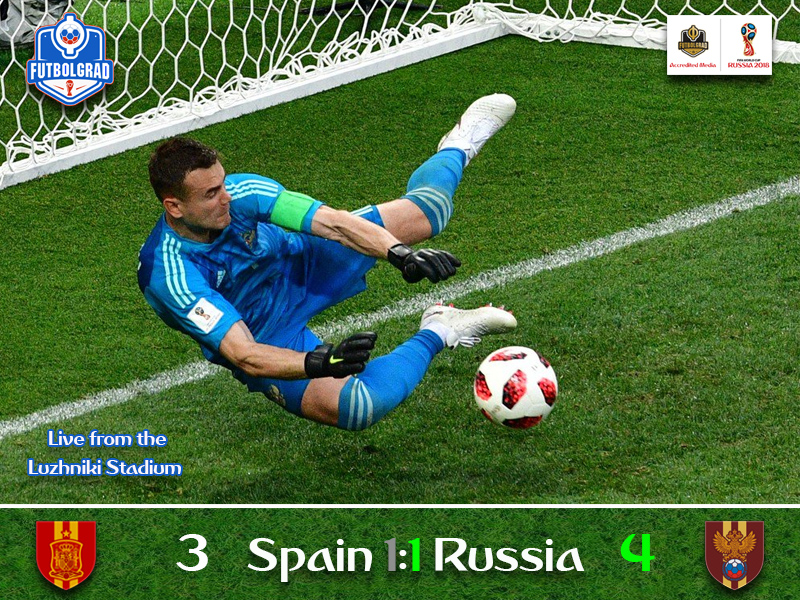 Spain v Russia produced the latest upset as the host nation managed to eliminate La Roja in a dramatic penalty shootout at the Luzhniki in Moscow.

Fear, anxiety, hope and determination. The host nation faced giants Spain in the round of 16. Russia went down early, but head coach Stanislav Cherchesov had the Sbornaya execute a game plan that saw Spain frustrated and as the heavens opened up over the Luzhniki to unleash a thundershower, Russia fought Spain all the way to penalties where Igor Akinfeev would become the hero.

As expected, Spain dominated had most of the ball in the first ten minutes – as a result, Russia fans were almost apprehensive only to turn it on whenever Russia did win the ball to break forward.

Prematch one of the most common talking points was that the Luzhniki would be the better venue for the Sbornaya in the round of 16, regardless of the opponent. In the national stadium so the tenor the fans would be more behind the team but only as long as Russia were in it. An early goal and the stadium could go quiet, and that was exactly the case when Spain took the lead in the 12th minute.

Yuri Zhirkov had taken down Nacho on the right, and Marco Asensio’s free-kick to the opposite of the box was redirected by Sergei Ignashevich. The 38-year-old had lost sight of the ball during a wrestling match with Sergio Ramos, who did the utmost to gain an advantage inside the box, and the ball hit his foot while falling leaving Igor Akinfeev without a chance in goal.

The goal did enough to dampen the mood inside the Luzhniki. Whenever Spain had the ball, which was after all most of the time, the stadium fell silent, only on the few occasions that Russia broke forward was there almost like a boyband like hysteria inside the Luzhniki – a scream of hope common by teenagers that are about to receive a token from their favourite teeny band member.

With 30 minutes gone the only positive for Russia at this point was that the Sbornaya did not crack under pressure. The side continued to execute the game plan laid out by head coach Stanislav Cherchesov, which was to quickly hit La Roja on the transition game.

That tactic almost worked in the 36th minute. Russia’s Artem Dzyuba won the ball deep inside Spain’s box and muscled the ball to Aleksandr Golovin. Golovin, in the news for being linked to both Chelsea and Juventus, stepped past one Spanish defender and then curled the ball on the net – for a moment everyone held their breath – but the ball zipped past David de Gea’s goal.

Then the moment arrived that everyone in this stadium anxiously awaited. In the 40th minute, Artem Dzyuba had a header blocked by Gerard Pique’s arm, and referee Björn Kuipers right away pointed to the spot. Dzyuba stepped up himself and easily converted causing the roof to come off the Luzhniki and sending the two teams into the dressing room with the score tied.

Dzyuba’s goal was, however, just a short release of pressure and when the second half kicked off the apprehension among the majority of the 78,000 spectators inside the Luzhniki was back. The Sbornaya, however, remained calm – sticking to the game plan, which was to leave the ball to the Spaniards and hit them in the transition game.

It was a strategy that was not without its risks and in the 58th minute, Isco appeared to have broken through the Sbornaya‘s defence and only in a collective effort were Russia able to steer the ball wide of Akinfeev’s net. Then in the 61st minute, the stadium woke up.

Cherchesov responded to the growing Spanish pressure by bringing on Denis Cheryshev for the 33-year-old Alexander Samedov. Considered a bit of an outsider ahead of the tournament, Cheryshev had played its way into the heart and minds of Russia’s fans in recent weeks. Shortly after, in the 65th minute, Cherchesov made his third substitution, Vladimir Granat had come on for Zhirkov at halftime, by bringing on Fedor Smolov for Artem Dzyuba.

It was a risky proposition by Cherchesov. The Sbornaya head coach had exhausted his substitution contingent. Furthermore, if Cherchesov expected more speed, he did not get it at first. 75 minutes in Spain started their typical ball circulation game attempting to slowly tighten the noose on Russia’s defence, which was further and further pressed into the defensive third.

Perhaps, the fans sensed that the team was on the ropes and nuzhen gol, nuzhen gol was ringing through the stadium and whistles and boos whenever Spain had the ball. Not that that changed the rhythm of the game and in the 85th Spain had the biggest chance to go ahead once again. Andres Iniesta hit the post with a great shot from about 20-yards out, Iago Aspas jumped on the ball and unleashed a shot from a tight angle inside the penalty box, but Akinfeev had recovered quickly to make a fantastic stop.

It was the last chance inside regular time as the game headed to overtime. Where Spain quickly continued to assert its dominance, which was underlined by La Roja having 75% of the ball. Cherchesov reacted by making use of the one extra substitution teams are allocated in extra-time by bringing on Aleksandr Erokhin for Daler Kuzyaev.

Not that the substitution changed Russia’s game plan one bit. The Sbornaya remained defensively tight while Spain played pass after pass after pass without making a constructive effort to find a way through Russia’s defensive line. With that, the time past slowly but surely as the referee ended the first half of extra-time.

It took until the 108th minute for Spain to get their next shot on goal. Rodrigo played a dummy to get past his defender and broke into the area on the half-flank, but his shot from 10-yards out was no problem for Akinfeev, who dived to the right to save the shot and his defenders then cleared the ball.

With minutes to go the fans started to wake up and as the heavens over the Luzhniki opened up to unleash a thundershower the former Lenin Stadium became a cauldron in which every move by the Spaniards was whistled down and every ball won by the Russians was celebrated like the country winning the World Cup and with that Russia rescued itself into the lottery that is the penalty shootout.

Once, there it was up to Igor Akinfeev to get the job done as the CSKA Moscow keeper stopped the attempts by Koke and Iago Aspas, and with all four Russian shooters being perfect, the Sbornaya celebrated the biggest upset of the tournament by eliminating Spain to go through to the quarterfinals.

Igor Akinfeev was outstanding. The Russia goalkeeper has been criticised on many occasions in the past, but in this game he was flawless. The keeper made nine key saves and then stopped two penalties for carrying his team to the quarterfinals. 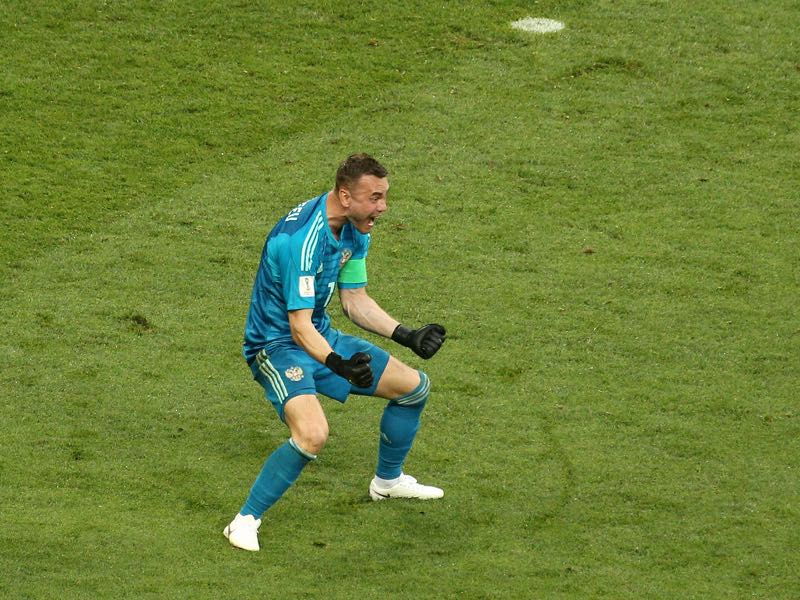 How far can this team go? Russia may have eliminated Spain, but the game plan of shutting out opponents might not work against teams that are quicker in the transition game. Spain, in many ways, undone themselves tonight as their game plan played right into Russia’s hands. The Sbornaya was never going to tire out and was still able to close passing lanes even in the 120th minute, but the likes of Croatia, who could be the opponent in the next round will never do Russia the favour of just circulating the ball. Hence, Russia now need a plan-b.