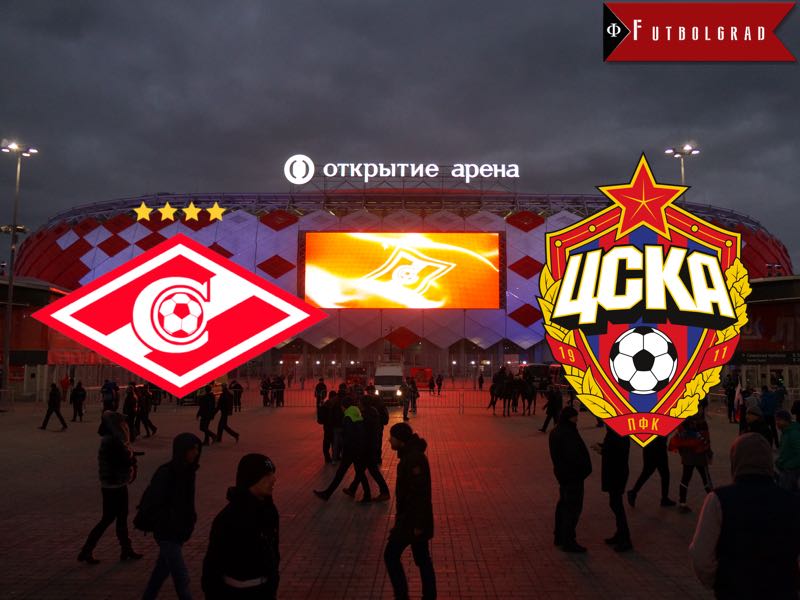 On Saturday the Russian capital will go on lockdown mode, as the mother of all Russian derbies, Spartak Moscow vs CSKA Moscow, will kick off 17:00 CET/16 GMT in the capital. There are plenty of storylines ahead of the big Moscow derby on Saturday, but perhaps the most interesting one is the apparent power shift amongst the teams of the capital.

In recent years, CSKA Moscow has been the undisputed champion of football in Moscow and indeed, in many ways, has become the strongest and most consistent club in Russian football since winning its first Russian championship in 2003. In the last 13 years CSKA has won the title six times, more than any other club in Russia in the same period.

Lately, CSKA Moscow has most often competed against Zenit Saint Petersburg, and the club’s Gazprom riches—Zenit has won four titles in the 2000s—but more frequently than not have left the club from Saint Petersburg behind in the standings. In fact, CSKA are only second in titles to Spartak Moscow, who have won the title nine times.

Spartak indeed dominated the immediate post-Soviet era. After winning the maidan Russian Vysshaya Liga title in 1992, the club went on to win another eight titles in the following nine championships—the only team to break Spartak’s dominance was Spartak-Alania Vladikavkaz in 1995.

In 2002, city rivals Lokomotiv Moscow won the Russian championship, and in 2003 CSKA Moscow captured its first Russian title. In many ways, the end of Spartak’s dominance of Russian football marked the end of an era.

In 2000, Vladimir Putin replaced Boris Yeltsin as Prime Minister of Russia. The country had recently undergone a dramatic economic recession, which ended in the Russian financial crisis of 1998. The crisis saw an end of the turbo-capitalism of the post-Soviet years, which was mostly fuelled by a shaky banking system, and mass privatization of Soviet assets.

In the chaos of the post-Soviet world, Spartak blossomed because the club had already been run like a private enterprise during the time of the Soviet Union and, while their competitors—CSKA Moscow, Zenit, and Torpedo Moscow—struggled with the new realities, transition to capitalism was easy for Spartak.

In the 2000s, however, the socio-economic landscape in Russia started to change. The rise of the resource based industry brought with it the emergence of the new oligarchs, and these new oligarchs also wanted to invest in football.

CSKA Moscow was one of the clubs that benefited, when Evgenii Giner bought the team in 2001. Thanks to Giner’s good connections with Russia’s then emerging oil and gas industry, CSKA Moscow was able to sign several high profile sponsorship contracts—including a three year sponsorship deal with Sibneft that was worth $54 million. Sibneft’s ownership by oligarch and Chelsea owner, Roman Abramovich, led to an investigation by UEFA over suspicions that Abramovich, and not Giner, was the owner of CSKA Moscow­­—a link that could not be proven.

Fuelled by private ownership and investments by major state organizations such as Gazprom, Zenit, the Republic of Tatarstan in Rubin Kazan, and of the Russian Railways in Lokomotiv, Spartak was somewhat left behind in the early 2000s.

In 2004, Spartak was bought by the oil tycoon, Leonid Fedun, who owns 9.2% of Russia’s largest independent oil company, LUKOil. It was believed that the billionair’s finances could re-establish the club’s position as number one in the country.

Over the last 12 years, Fedun has indeed invested heavily in the club, but the results have been poor and the club has employed 12 different head coaches—among them big name signings such as Michael Laudrup (2008-09), current Paris Saint-Germain coach Unai Emery (July to November 2012), and Murat Yakin (2014-15).

The most recent experiment with former club legend Dmitri Alenichev, who was hired to re-install the Spartak ethos, was ended after Spartak was eliminated in the third qualification round of the Europa League. Spartak then attempted to sign Kurban Berdyev, who had guided FC Rostov to a sensational second place finish last season, but the negotiations were ended, when Spartak refused to meet Berdyev’s demands over bringing in an entirely new coaching team.

This could very well be true now, as Carrera was quickly named Alenichev’s successor in late August after negotiations with Berdyev broke down. Under Carrera, Spartak have collected five wins, one draw, and one loss, and have taken the lead in the Russian Football Premier League.

The trend is not CSKA Moscow’s friend, as the Red Army men never convinced this season. Even worse, there have been fan protests against CSKA Moscow head coach, Leonid Slutsky. Some of these protests are of a political nature, as some of CSKA Moscow’s more right-wing ultras are reportedly unhappy with Slutsky’s support of a Jewish institute in Moscow.

But to put down the protests having been motivated by anti-Semitism might be a bit of a stretch at this point—despite the fact that some of CSKA’s ultras are known as the most racist in the country—as many fans are simply fed up with Slutsky’s defensive tactics.

There have also been calls for a more offensive transfer policy, as the club failed to attract another attacking option in the summer. As a result, Slutsky is accused of playing boring cowardly football. Eleven goals in eleven games show that the critics may very well have a point.

Spartak, on the other hand, not only has an ambitious coach at the helm at the moment, but also has been active on the transfer market this summer. Players who were thought to poison the dressing room (such Yura Movsisyan, who was sold to Real Salt Lake City for €3 million, Sergey Parshivlyuk, who left for Anzhi Makhachkala, and Vladimir Granat, who went to FC Rostov on a free transfer) were taken off the roster.

In their stead, Spartak brought in the Brazilian midfielder, Fernando, from Sampdoria for €12.5 million, and Roman Zobnin, from recently relegated Dinamo Moscow, for €3 million. Both have featured regularly in Spartak’s starting eleven, and Fernando, in particular, has been important to stabilizing Spartak’s midfield.

But Carrera has also been able to get more out of players who were already part of Spartak’s squad before he took over. The 23-year-old defender Ilya Kutepov has had an outstanding season so far, and could very well be the answer to Russia’s defensive woes.

I'm back in Russia! Had a good morning session in the gym. #QP10 pic.twitter.com/jy8uC09H9F

Furthermore, Carrera was able to rely on Quincy Promes, who, once again, is having a strong season in Russia. The Dutch forward had picked up an injury recently but should be available for the match on Sunday. Spartak will, however, be without Zé Luís who will likely be replaced upfront by the Bulgarian Ivelin Popov.

CSKA Moscow will again be without Roman Eremenko, who has been banned by UEFA for 30 days but, other than that, Slutsky will have the full spectrum of his squad available. CSKA have, however, lost the recent derby to Lokomotiv and, with Slutsky stuggling to install creativity on his squad, Spartak will be the favourites going into the derby, where with a victory they could strengthen their title challenge, which would fulfil the hope of Spartak fans to finally retake the mantle as Russia’s biggest club.