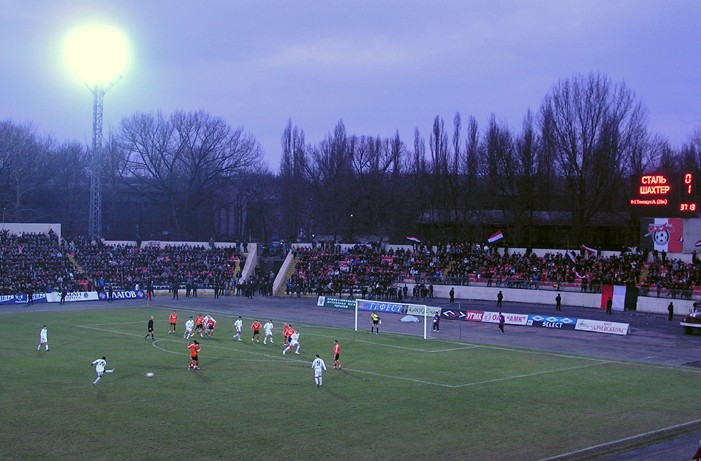 Donetsk, Mariupol, Alchevsk, and Luhansk, are some of the hotbeds of the on-going Civil War in Ukraine. The four cities are also the homes of six clubs that are participating in the Ukrainian Premier League and Pervaia Liga (Second League) this season.

Alchevsk is one of many bleak mining towns located in the Donbass, and the clubs name Stal (Steel) indicates the close connection between the club, and its sponsor the Alchevsk steel and iron works.

Due to the fighting, Stal Alchevsk has been playing in exile in the Poltava region, yet the club has maintained its training base in Alchevsk under unstable conditions. As head coach Anatoliy Volobuyev explained: “Alchevsk is only 40 kilometers from Debaltsevo and we can hear the fighting from here. Recently, we’ve had a rocket hit the town too. To play football in these conditions simply isn’t right.”

Under those difficult financial and psychological circumstances the club has now decided to withdraw from the Ukrainian Pervaia Liga (second division), as Stal’s sponsor the Alchevsk steel works has been taken offline due to the war. Alchevsk may entirely cease to exist, as Arsenal Kiev is now in line to purchase Alchevsk’s Pervaia Liga licence.

The entire episode has put renewed doubt on the future of Ukrainian football, even with Arsenal Kiev potentially in line to replace the club; the continuation of the conflict may force smaller clubs from the region to discontinue their participation in professional football.

Already prior to the season the Ukrainian Premier League struggled to field a full list of teams, and as a result the league was downsized from 16 to 14 teams. Last week Ukraine legend Andriy Shevchenko appealed to the authorities not to stop league play this season. But the very fact that Shevchenko had to speak out on the matter suggests that this option is now very much on the table.

Indeed the fate of Ukraine’s football may very well be decided this week as Europe’s leaders are headed to Minsk to discuss a peaceful solution to a conflict that seems unsolvable. If the renewed Minsk talks fail, then the fate of Ukrainian football may be similar to that of Egypt, where league football had to be suspended in 2012 and again this year.