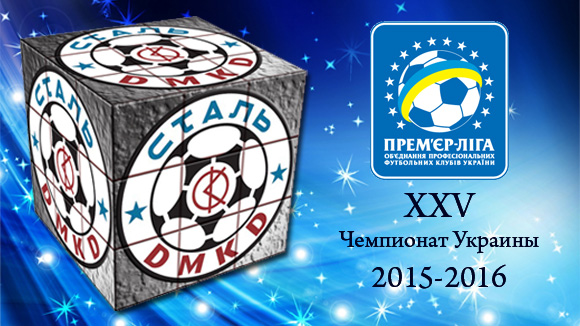 One day before the first match of the new Ukrainian Premier League season, the Football Federation of Ukraine has finally announced that FC Stal Dniprodzerzhynsk will be the 14th club that will take part in the competition, thereby taking the place of bankrupt Metalurh Donetsk.

In June Futbolgrad reported that the two clubs were set to merge into one, and that the new team would take Metalurh’s place in the Premier League. The proposed merger never materialized, however, and on July 11 Metalurh declared bankruptcy, citing economic difficulties due to the ongoing military conflict in the Donbass region. Despite the failed merger with Metalurh Donetsk and the latter’s subsequent bankruptcy, FC Stal remained determined to take their spot in the top flight. Earlier this week, club president Maksym Zavhorodny said “we have applied for entry into the Premier League as Stal Dniprodzerzhynsk and we want to enter, without the merger, as the club that finished in second place in the First League last season.”

The decision to admit Stal into the Premier League is highly controversial because another team, Illichivets Mariupol, who ended the season in last place and were relegated, applied for the vacancy in the UPL after Metalurh’s bankruptcy was filed. Illichivets officials argued that they had a legal claim for the spot, as league regulations state that if a team finishing higher than last place is expelled from the competition, their spot must be taken by the team that finished in last place. Just yesterday Illichivets board chairman Serhiy Benederskiy announced that if the club is excluded from the league, they will appeal the decision of the FFU at the Court of Arbitration for Sport in Lausanne.

But, the situation is not quite so straightforward—Metalurh Donetsk were not expelled from the UPL, but rather declared bankruptcy and declined to enter the competition the following season. Stal’s claim is based on a different league rule that states that in the event of a situation for which existing regulations do not offer a solution, the decision regarding membership in the UPL is to be made by the executive committee of the FFU, based on the recommendations of the Premier League.

Over two-thirds of the executive committee reportedly voted for Stal, who have now technically achieved two successive promotions and will compete in the top flight for the first time in their history. At the time of this article’s publication, Illichivets officials have yet to comment on the committee’s decision.

To add to the confusion, Serhiy Palkin, the general director of Shakhtar, has been vocal in his support for Illichivets, with whom his club have close ties. Earlier this week he said, “It is obvious that they will continue to drag Stal [into the Premier League], because someone needs that,” thereby implying that there are other than sporting reasons for the decision. Today Palkin severely criticized the FFU for their decision, and accused the executive committee of “flagrantly violating procedural rules and demonstrably ignoring sporting principles.”

The entire debacle surrounding who should take Metalurh Donetsk’s place in the top flight offers a glimpse into the general state of affairs in Ukrainian football, especially the absence of the rule of law and the presence of disorganization to the point that the identity of the final club entry remains unknown on the eve of the league’s kickoff.

As midfielder Oleh Herasimyuk put it while training with Metalurh just last week, “These are the realities of our football: one week before the league, but no one knows anything.”