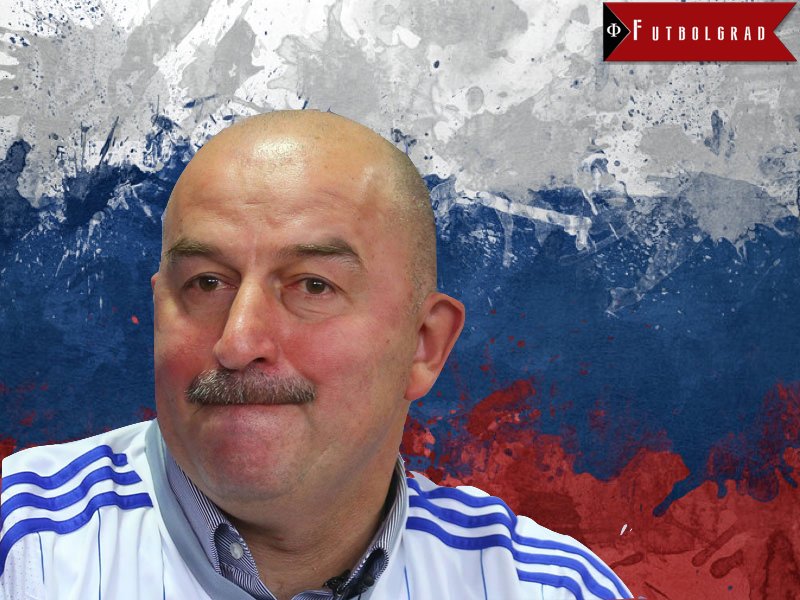 Stanislav Cherchesov – Is he the right man for Russia?

New Russia coach Stanislav Cherchesov has just named his first Russia squad for the forthcoming friendlies against Turkey and Ghana. His selection has been met by many with optimism: just eight of the players who failed at Euro 2016 make the squad, and FC Rostov’s progress last season is finally recognized as four of their regular starting line-up are in Cherchesov’s plans. Pavel Mamaev and Aleksandr Kokorin both miss out—a decision that is a hit with fans after their extravagant post-Euro behaviour. 37-year-old Sergey Ingashevich is also rested, though it’s clear that the door hasn’t been shut on him.

Cherchesov has also included three players who will only train with the side—the recently-naturalised Mario Fernandes plus prospects Ilya Kutepov and Roman Yemelyanov. The former cannot yet play for Russia, but Cherchesov seems to want the opportunity to gauge his commitment. Tantalizingly, the coach has suggested that Kutepov and Yemelyanov may yet earn a place in the current squad if they do well enough in training.

The appointment of Stanislav Cherchesov as Russia’s national team manager has been met by many fans with cautious optimism. Many seem pleased with this homegrown choice. His straight-talking style and general preference for attacking football are also seen as pluses. However, I feel concern that things may not work out.

Stanislav Cherchesov has only ever been a short-term solution

For one thing, Cherchesov has only ever been a short-term solution: a great year at Spartak Moscow and last season with Legia Warsaw; a good year at Terek Grozny, and half a season at Dinamo Moscow and Amkar Perm.

But, if he’s going to lead Russia to the World Cup, he’ll need to be in post for just short of two years—something he has not yet managed to do. His sides tend to peak during his first year, then he leaves or gets sacked in the second. If things go according to form, that means Russia will have a good 2017 Confederations Cup before the problems start.

Cherchesov’s ‘good’ years are worthy of some scrutiny. A league and cup double in Poland with Legia last year is his greatest achievement, so, in one sense, now is the right time for him to take on a far greater challenge. His next biggest achievements are a strong season in 2007, when his Spartak side ran Zenit very close for the Russian Premier League title, and the great Europa League group stage Dinamo had in 2014.

Terek finishing eighth under Cherchesov did seem like a big deal in 2013, but the club—without any significant change in budget—has moved onwards and upwards since then. On this evidence, we’re looking at a manager with a relatively modest record—others who have achieved more have come short where he’s now expected to deliver.

Cherchesov’s ability to command players’ respect is perhaps seen as his most valuable asset. Maybe he will achieve what other Russian managers have failed to do in galvanizing an undoubtedly talented squad of players into a cohesive team. Aleksandr Kokorin is the example most often held aloft of the current crop of super-rich, underperforming internationals, who, over the years, have shown the ability but have never quite applied themselves: Diniyar Bilyaletdinov, Dmitri Torbinski, Dmitri Bulykin and Roman Bugayev are names that immediately spring to mind.

On the one hand, a more bullish manager may get the best out of players such as these; but, on the other hand, he may end up causing even more issues. At Dinamo Moscow, for example, Cherchesov fell out with midfielder and Russian international Igor Denisov over team selection, and banished him to the reserves—fans will be angry if incidents like this are repeated in the currently threadbare national team.

The Denisov issue also has to make one wonder how much the players really respect Stanislav Cherchesov. Call me cynical, but it’s hard to imagine Kokorin suddenly deciding to change his ways now that he’s heard who the new Russia manager is.

Finally, it’s worth looking at issues beyond Cherchesov’s immediate control. It may be linked to the foreign player limit—it’s certainly linked to a lack of grass roots development—but currently there just aren’t many good Russian players out there.

Much is being made of the changes Cherchesov has made when compared to the Euro 2016 squad, though it’s not as startling as it first seems: Kokorin, Mamaev and Ignashevich will surely return, whereas current squad members Yuriy Zhirkov and Alan Dzagoev would have been in the side had it not been for injuries and (in Zhirkov’s case) a conflict with former manager Leonid Slutsky. Elsewhere, the reintroduction of Maksim Kannunikov and Dmitriy Tarasov feel, at best, like a step sideways. But this brings us back to the issue of a lack of talent: realistically, there are probably only 30-35 players who are challenging for a place in the side right now, and too many of those are on the wrong side of thirty.

Yet, despite the shortcomings in the squad, Cherchesov has been set a big task by the Russian Football Union—to reach the World Cup semi-finals—although in an interview with the kicker he was cautious about Russia’s World Cup chances, saying, “I have to work with the squad first before setting goals.” Obviously there is a need to think big, given that it’s a domestic tournament, but Russia have never even managed to get out of the group stages at a World Cup. This extra pressure placed on Cherchesov and his side might start to tell if, say in a year’s time, things are not improving.

I may be less optimistic than many about Russia’s new manager, but there wasn’t a great field out there in the first place; he probably was the best horse for this particular race. Let’s hope that the time he has at his disposal is spent fruitfully—and that ultimately I’m proved wrong in my prediction that this appointment will most likely end in tears…

Saul Pope has been following Russian football since the mid nineties, and first saw a live game in 1998 (Zenit St. Petersburg vs Shinnik Yaroslavl’). He has been contributing to When Saturday Comes magazine for over a decade, with a particular focus on social, economic and political issues surrounding the game in Russia and, to a lesser extent, Ukraine. He has a particular passion for teams in and around St. Petersburg. A fluent Russian speaker, he graduated from the University of Surrey with a Master’s degree in the language. He lives in the UK, but travels back to Russia on a regular basis. You can follow Saul on Twitter @SaulPope