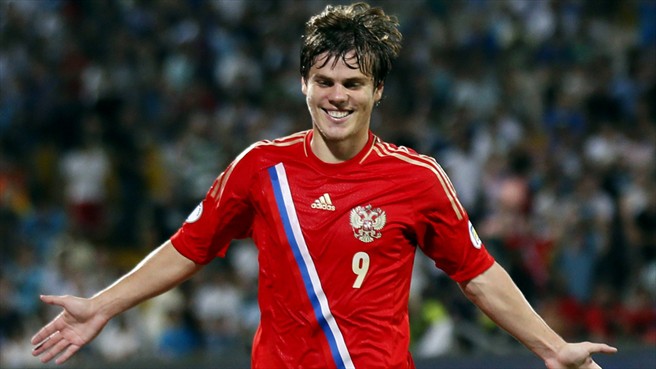 In the wake of last Friday’s agonizingly elongated World Cup draw, a trip to an online Irish-named bookmaker brought a startling discovery – Russia were priced at 66/1 to win next year’s World Cup.

The prospect of Belgium, Algeria and South Korea in Group H should be more than palatable for the Russians next summer. However, despite having finished above Cristiano Ronaldo’s Portugal (listed at 33/1) in qualifying, the bookmakers are all but dismissing their hopes. This may appear reckless until you examine the Russians’ attacking options.

Fabio Capello’s men sealed qualification with an underwhelming 1-1 draw in Azerbaijan where once again it was an energetic midfielder – Zenit’s Roman Shirokov – rather than a forward on target.

With the previously reliable Aleksandr Kerzhakov in unconvincing form at Zenit, the goal-scoring burden may fall on 22-year old Aleksandr Kokorin whose capabilities, and natural position, divide opinion.

The Dinamo Moscow striker, referred to by some avant garde spectators as a “false nine”, has not quite lived up to early expectation since making a scoring debut at the age of 17. A tally of 10 goals in the 2012/13 campaign – his highest ever total for a season at Dinamo – enticed Anzhi Makhachkala to spend 19 million euros last summer on Kokorin. It was to be little more than a coastal holiday though as the mysterious sea-change in policy at the down-sizing Dagestani club, saw an abrupt exodus of high-earners, and Kokorin traipsed back to Dinamo within a few weeks for a full refund, without having played a single game for the Orly (eagles).


Revitalised by his cameo on the Caspian Sea, the quick Valuyki-born attacker netted seven goals for club and country in September including, most importantly, Russia’s second in a 3-1 win over Israel which all but confirmed World Cup qualification.

But unlike the saturated quagmire pitches on which Dinamo have been forced to play this season, Kokorin’s goals have run dry. In early November, as Dinamo toiled to an instantly forgettable 1-0 success against lowly Tom Tomsk, Kokorin found himself clean through on goal only for a pathetic attempted chip to land safely in the goalkeeper’s hands.

This came in the middle of a nine-match barren spell which finally ended on November 30 as he netted the third in a 3-0 romp over Ural Sverdlovsk.

Kokorin benefits from that fact that Roman Pavlyuchenko, who is a far more accomplished finisher, retired from international football in August last year with any potential campaign for his return unlikely given his thus far lean season on the periphery of Lokomotiv Moscow’s title challenge.

A lobby is growing however for the inclusion of the domestic league’s top scoring Russian, the 6ft 5in battering ram Artyom Dzyuba, who is playing on loan at unfashionable Rostov and remains largely overlooked by the Italian head coach.

Russia’s World Cup record is wretched, with only two victories (Cameroon in 94, Tunisia in 02) to their name since the fall of the Soviet Union. Will 2014 be the year their luck changes? With such an indifferent strike-force, I wouldn’t bet on it.