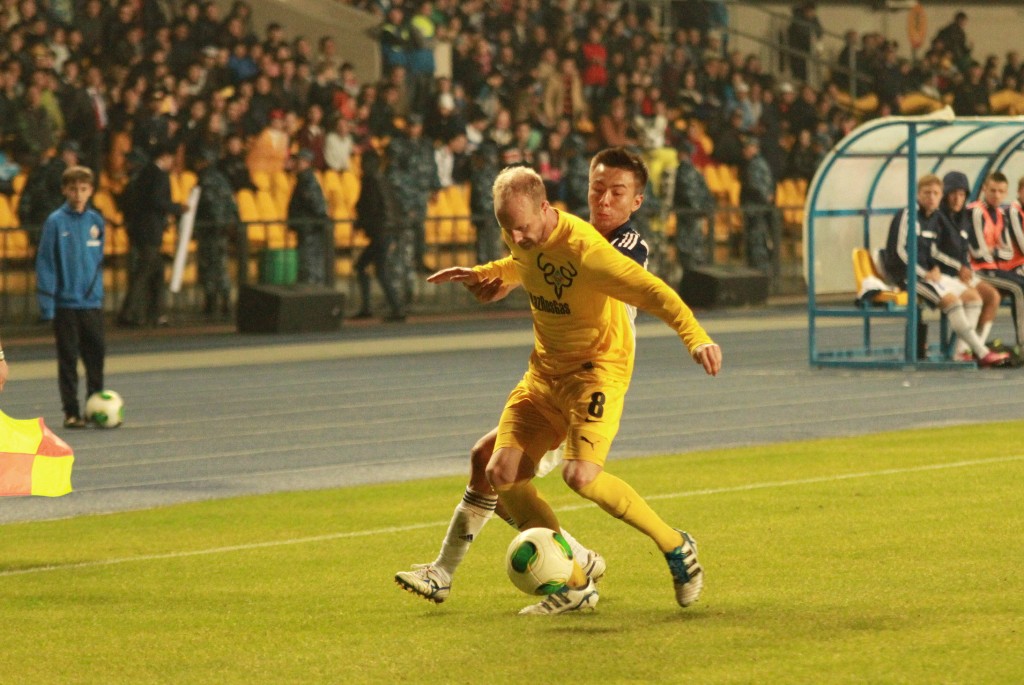 In February 2012, the Scottish Daily Express announced Stuart Duff as the first Scot “to try Kazakhstan”, a headline which encapsulated the confusion, and caution, in dealing with the idea of a British footballer agreeing to move to a country better known for macabre deportations, an energy dependent economy and a fictional comedic character now so hackneyed that his single reference in this article has already passed.

At 30, Duff, having accrued ten Scotland under-21 caps and a decade of Scottish Premier League experience, decided to conjure up something almost unimaginable and fantastical to most British footballers: to move abroad. While it seems Britons enjoy the widest range of visa-free travel in the world – being able to visit 173 countries with just a passport – the wealth of spatial mobility does not, it appears, apply to Britain’s footballers whose particular brand of foreign policy (or lack thereof) continues to shock and awe and, ultimately, underwhelm.

Whether or not Ian Rush mused that living in Italy during his time at Juventus was “like living in a foreign country” is beside the point. The importance of that statement, real or not, defined the attitude, alarm, and downright horror most modern-day British footballers have of playing abroad and being separated from the maternal bosom of the British Isles.

Duff, however, is an exception.

Kazakhstan – the Land of Wonder

Despite Kazakhstan’s irksome visa regulations and wanton bribery by so-called officials on arrival at Almaty’s cowshed of an international airport, Kazakhstan does remarkably pay lip service to a nascent and somewhat ostensible tourism campaign for the few who enter its borders not on business. With banners welcoming guests to the Land of Wonder, a thoughtful appellation which touches upon Kazakhstan’s vast dimensions of which 75 percent is desert, semi-desert, or steppe, it also sets the tone of curiosity with which Duff has grown accustomed when speaking about his two-year stint in Kazakhstan’s former capital with FC Kairat Almaty. “I was always keen to go abroad”, Duff tells me refreshingly as our interviews begins. 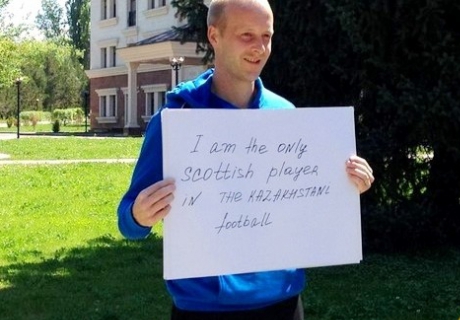 Having started his wanderlust at Maltese club Qormi F.C., Duff, six games later, rolled the dice and took the midnight express to Turkish seaside city of Antalya where his agent asked him to join FC Kairat on an official training camp. Two weeks later, Duff had signed a two-year deal with Kairat who, at the time, were managed by Dmitriy Ogai, a Kazakh professional football manager of Korean descent with seven seasons of experience in the Soviet Top League with FC Kairat and FC Pakhtakor Tashkent. Duff was not, as some suspected, one of John Gregory’s guys, the Englishman having already been dismissed the previous month .

Almaty, formerly known as Alma-Ata, meaning Father of Apples, was the home of Duff for two fruitful years. “I was lucky”, Duff stressed throughout, “with the staff and facilities [at Kairat]… For the first year, I stayed at a top hotel in the city and for the second I was given a very comfortable apartment well located in the city centre” (such accommodation averages 1000-2000 USD a month and beyond). “The financial part of the move was a bonus” as Duff then unwittingly preempts forthcoming questions purposely deferred before an element of trust was established.

Duff confessed that he had broken another Brits abroad taboo having made an effort with the local language, with Russian, the country’s lingua franca, and Kazakh, the country’s indigenous language: “I’d try with Russian, and sometimes add a little bit of Kazakh”, Duff remarked with no motive to impress. “We were provided with a translator, Daulet, with whom I struck up a good friendship in the end. However, we as players would find a way of communicating, with language being shared back and forth. I was amazed at how much I had learned after a year having been grateful to players such as Ilia Vorotnikov and Andrey Shabanov to name only a few…”.

Currently training against North Sea winds with Aberdeen as a free agent, the Kincorth-born midfielder spoke of his time in Kazakhstan in purely upbeat terms: “I miss the free life” Duff recalls. Despite Kazakhstan’s unimpressive and static positioning within Freedom House’s Freedom in the World rankings – its overall status in 2014 remaining as “Not Free” – the paradox of Duff’s comment is both real and sincere. “I could walk about the streets with entire freedom. I pass as  Russian so I’d never get any extra attention; If I decided I wanted to go out, I’d flag down a taxi and within minutes be on my way to meet friends. I enjoyed a more leisurely approach to evenings out compared with those associated with British drinking culture…” Acknowledging that Kazakhs and Russians were prone to evaporating rather large measures of vodka, Duff discussed the nuances of the après match culture he discovered in Almaty, where he attended dinner parties with teammates, once discovering the traditional Kazakh feast which included a boiled sheep’s head, whilst also having the option to meet with the few hundred fellow British expats for whom Almaty is home. Duff was keen to underline that in his two years in Kazakhstan he never once felt endangered.

“I was surprised, very surprised” Duff positively notes when asked about not only the standard of football in Kazakhstan, but of its facilities. He did however qualify this and observed that like with so many other aspects of the post-Soviet space, the league was coarsely divided between the haves and the have nots. Thankfully for Duff, he had joined a side comfortably placed in the former category.

FC Kairat, founded as Lokomotiv Almaty in 1954, and known later as Urozhai Almaty, were the leading Kazakh team during the Soviet era, and the only club from the Kazakh S.S.R. (Soviet Socialist Republic) to have competed in the Soviet Top League. 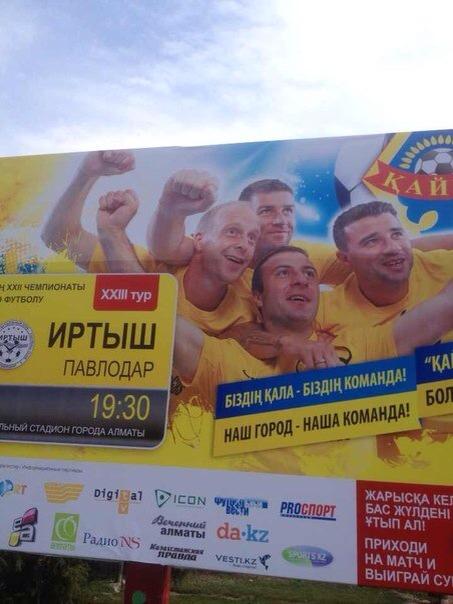 Duff, therefore, had not only joined Kazakhstan’s most famous side, which had altogether spent 24 seasons in the Soviet top division, a record for a Central Asian team, but one which operated under the ownership of Kairat Boranbayev, whose recent resignation as General Director (Chairman of the Board) from KazRosGas has cast some doubt on the future of FC Kairat, and whose forename is coincidentally that of the side he runs.

Using the Scottish Premier League as a natural barometer, Duff calculated that “many clubs in Kazakhstan would feel at ease in Scottish football’s top tier with FC Astana, FC Aktobe and Kairat all capable of challenging Celtic for top position”, a statement which caused derision in one particular online Scottish football forum. Interestingly, little mention was made of Glasgow Celtic’s Champions League qualifying opponents Shakhter Karagandy, regarded by Duff as “well organised, strong and difficult to play against.” In particular, Duff highlighted the technical qualities of FC Aktobe – a club financially well-placed nestled in one of Kazakhstan’s wealthiest oil and gas provinces – and named their attacking midfielder Marat Nailyevich Khairullin as a player of particularly high quality.

For Duff, who still receives calls from fellow professionals seeking tentative advice about playing abroad, and whose time at Kairat was cut short due to a ruling which prevents non-Kazakh players from participating in its national league if not representing their national side, his time at Kairat seemed to transcend mere footballing achievements. Duff came across as someone (quietly) fulfilled at having taken a (successful) leap of faith and was philosophical and good-natured about the ruling preventing him from finishing his career in Kazakhstan.