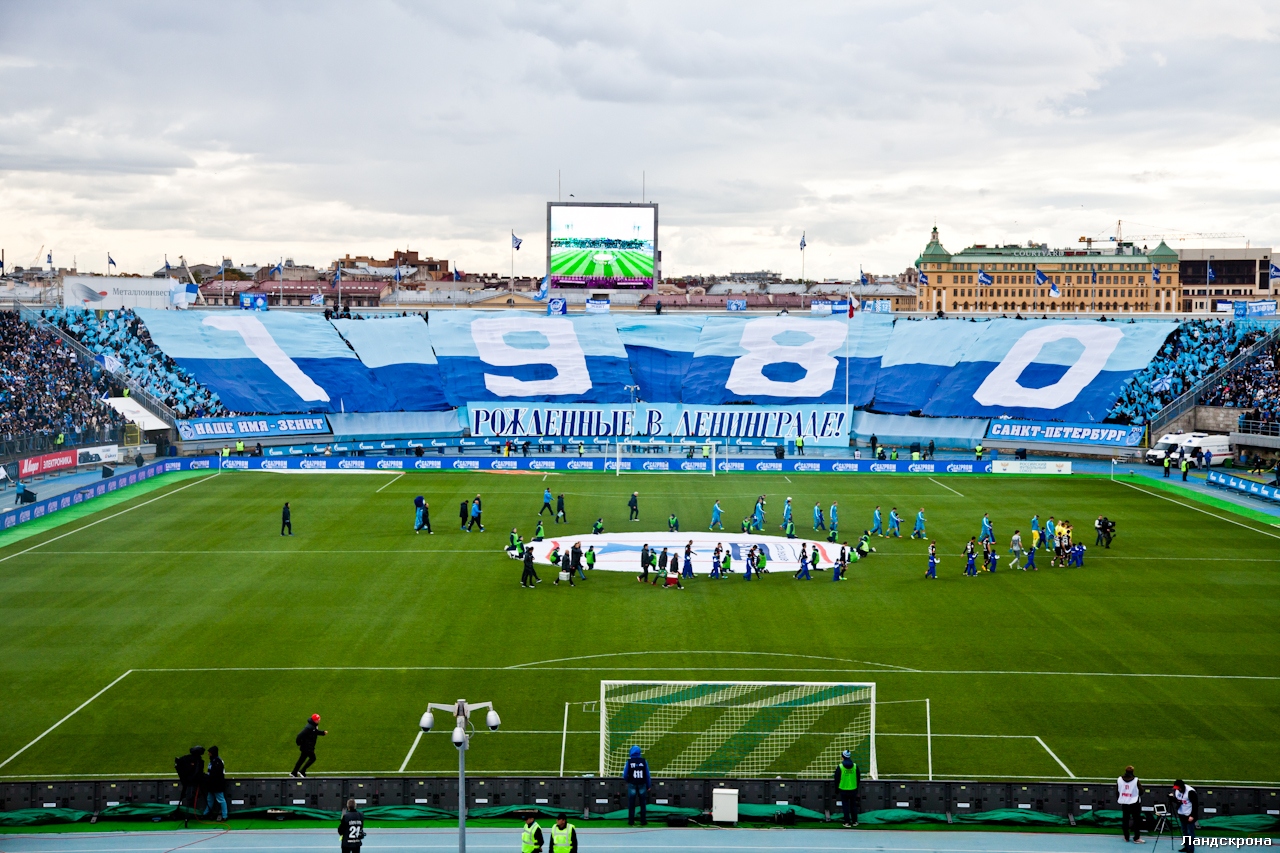 The Ugly Side of FC Zenit St Petersburg

Going to the Petrovsky Stadium to watch Zenit St Petersburg had been a tradition in my family for over three generations. With just one club representing St. Petersburg, Russia’s second largest city, FC Zenit have historically always had the largest and most dedicated support of any Russian club. Even during the turbulent 90s, when the team was struggling in mid-table, FC Zenit remained one of the few Russian clubs that always played in front of sold-out crowds. Much has changed at the club since Gazprom began pumping record-breaking amounts of money into Zenit’s budget, propelling the team to three championship titles since 2007 with the financial means to purchase virtually any player willing to ply their trade in Russia.

Supported by several politicians in the upper echelons of the Russian government – including prime-minister Medvedev and Mutko, Russia’s Minister of Sport and Tourism – FC Zenit has become a symbol of Russia’s newly acquired wealth. Yet underneath Zenit’s glamorous new appearance as one of Europe’s biggest spenders with a star-studded squad lies a more disturbing reality surrounding the club’s racist fan culture and how it reflects xenophobic tendencies within Russian society as a whole.

The phrase “there is no black in Zenit’s colors” was first spotted back in 2004 – a year before Gazprom took control of the club – at a UEFA Cup match against Austrian side Pasching, and has quickly become a calling card of the unapologetic racism espoused by an increasingly large group of their fans. As recently as 2012, a group of ultras painted a 50 meter-long mural along one of St.Petersburg’s embankments bearing the same words that have since become irrevocably associated with the club.

Such blatant xenophobic outbursts by fans of Russian clubs have raised eyebrows in European football, with both UEFA officials and representatives of the media condemning the rise in racist behavior and – more importantly – the club’s seeming unwillingness to address the issue. In a now infamous manifesto, Landscrona – arguably Zenit’s largest organized fan group – caused an international uproar by asking the club’s management to refrain from signing black and homosexual players. What had previously been the subject of rumors and speculation was now out in the open. Zenit’s most vocal supporters were not only unabashedly racist and homophobic, but also extremely proud of their “patriotic” views, seeing themselves as guardians of Zenit’s unique “regional identity” as a whites-only club.

While the manifesto sparked outrage across the international football community, the public and official response to the scandal was insignificant in St.Petersburg. Club officials downplayed the importance of the Landscrona fan group, dismissing it as a marginal faction unrepresentative of its fan base. Even Zenit’s Italian manager Luciano Spalletti shrugged off the manifesto, calling it a mere “act of stupidity”. Unwilling perhaps to go against their wealthy employer, none of the team’s foreign or Russian players and staff openly condemned the manifesto, preferring to keep silent on the subject and focus on issues on the pitch. In an interview with the BBC, Zenit’s former Portuguese defender  Bruno Alves (currently playing for Fenerbahçe) simply ignored questions pertaining to racism in the stands, choosing instead to talk in banalities about on-pitch performance and the importance of winning games.

Beyond the confines of the club, it seems that the manifesto has resonated positively with many regular Zenit fans, even with those who do not regularly go to the stadium. In fact, the racist and xenophobic views espoused by Zenit’s fans in many ways reflect Russian public sentiment at large, tapping into prevalent fears and prejudices among many Russians – whether football fans or not.

But what the rest of the world sees as signs of blatant racism is nothing more than a form of local patriotism. Long before the manifesto scandal, Alexey Rumyantsev – the leader of the very same Landscrona fan group – openly voiced his views on racism, football and ethnic politics in a candid interview with the Russian press. Commenting on an earlier banana-throwing incident involving Roberto Carlos (then of Anzhi) during an away match in St.Petersburg, Rumyantsev denies that there was any racism involved, attributing the whole thing to a foolish sense of humor. When confronted with promoting racism by refusing to allow black players to play in the squad, he refutes the accusation:

Some Zenit fans are unambiguous about their racial prejudice

“Racism? No. I was just taught in school: blacks should live in Africa, Indians – if there are any left – in America, Chinese – in Asia. And then they can all visit each other…but only to visit, not to stay and bring their habits and laws with them. I want the outskirts of the city to be St.Petersburg, not Baghdad, Nigeria or whatever else”

How is it that these fans make a connection between black football players coming to play for Zenit and the perceived threat of mass immigration? Indeed, it appears that behind the refusal to allow black players to play for the team is connected to a much broader xenophobic worldview to keep “Russia for Russians” – a controversial yet popular rallying cry for Russian nationalists. Despite sharing views held by right-wing extremists, Landscrona’s leader refused to be labelled as a Nazi: “My grandfather died in the war. Hitler was f****** scum. If anybody dares to wear a swastika at the stadium, I will be the first to bash their head in. We’re not fascists. We just love our city and want to protect its history and heritage”. Two years after this interview, those same words were repeated as part of the manifesto.

With a virtually limitless budget thanks to Gazprom, Zenit have developed a voracious appetite for trophies having now set their sights on Champions League success in the near future. A new state-of-the-art stadium – despite numerous delays and corruption scandals – is scheduled to open soon, the final stepping stone in forging Zenit’s new image as a leader of European football. But the regular outbursts of outright racism as well as what is seen by many as the club’s unofficial discriminatory recruiting policy are hardly what one would expect from a top football club. Remarkably, the club has done little, if anything, to tackle the problem, preferring to deny any such issues having ever existed in the first place. 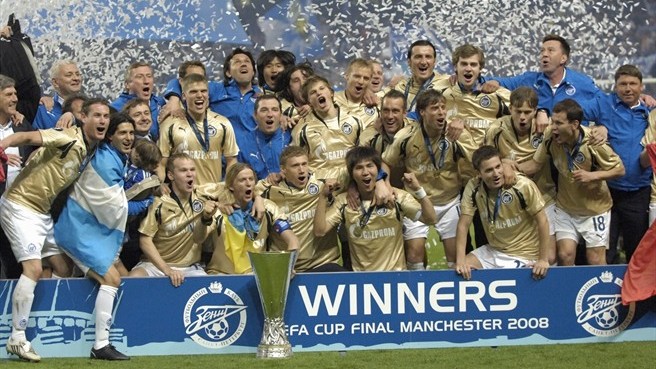 Given its budget and immense popularity, Zenit could potentially set an example to other Russian teams by actively promoting diversity in opposition to growing xenophobia within Russian society. Thus far, the club’s administration has made sure both its players and staff refrain from talking to the press on what are considered to be touchy subjects. Aside from the occasional pro forma press release condemning racism, Zenit have continued to lend support to their most loyal – and disturbingly xenophobic – fans. Just as the Russian government has looked on with a mixture of disinterest and encouragement at the worrying rise in xenophobia across the country, Zenit has followed suit in sweeping the problem under the rug. By doing so, the club are not only helping to promote intolerance within Russia’s society, but are effectively alienating themselves from the global footballing community – something its wealthy owners have thus far failed to understand.

Yan Matusevich is a recent graduate of Bard College in Political Science who is currently based in Berlin. A native of St.Petersburg, Yan grew up living between Southern France, Alaska and the East Coast. As a lifelong football fan with a keen interest for everything post-Soviet, Yan spends his free time traveling through Eastern Europe and collecting football kits along the way. Read Yan’s blog Eastern Profiles for political commentary on post-Soviet spaces or find him on Twitter @ymatusik