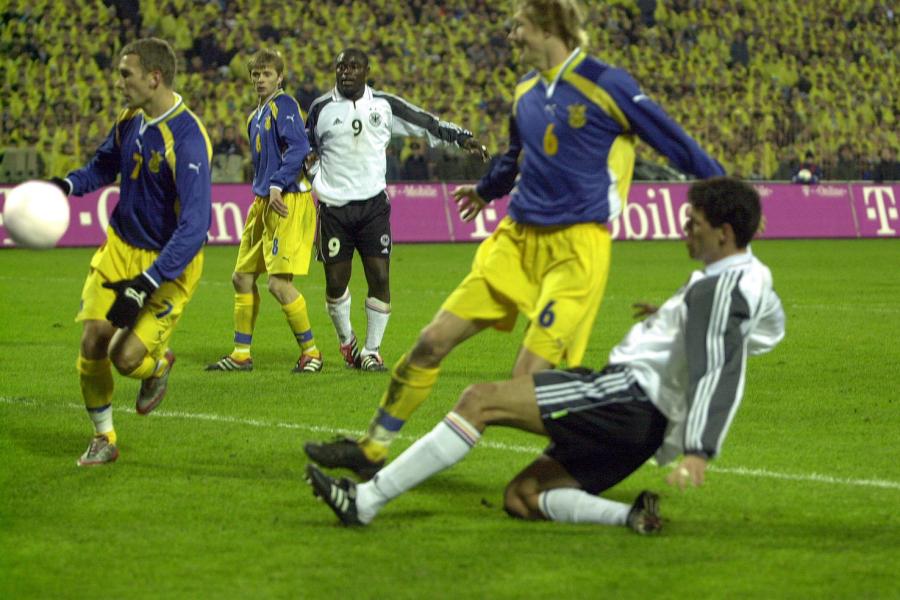 Ukraine in the Playoffs – Recapping Eighteen Years of Qualification Misery

On Saturday and Tuesday the Ukrainian national team will take on Slovenia in the playoffs of the Euro 2016 qualifiers with a spot in France at stake. Ukraine in the playoffs is familiar territory for fans of the zbirna, as it is the sixth time in their history that Ukraine has reached this stage. So far, they have failed to qualify all five previous times, including a 3-2 defeat on aggregate to Slovenia in 1999. Futbolgrad looks back at Ukraine’s disheartening playoff history.

When the Soviet Union fell apart, the spot of the Soviet national team in FIFA competitions – as well as its entire history and legacy – was handed to Russia, who was declared the official successor. As a result Russia entered the qualifying stage for the 1994 World Cup, while Ukraine and all other Soviet successor states were barred from entry. Because of this decision, several Ukrainian-born players, including Yuriy Nikiforov, Vladislav Ternavsky, and Andrei Kanchelskis, opted to represent Russia rather than Ukraine, a major setback for independent Ukrainian football, which was still in its infancy.

The first major tournament for which Ukraine attempted to qualify was Euro 1996, but a 2-0 loss at home to Lithuania in their first-ever competitive fixture was the worst possible start to the qualifying cycle, and they ended up finishing fourth, ten points out of the qualification spots. The 1998 World Cup qualifying campaign was far more successful. The Ukraine side, managed by Dynamo Kyiv legend Yozhef Sabo, finished second in a group containing Germany and Portugal and went through to the playoff stage, were they were drawn against Croatia.

By the time of the playoff fixtures, Ukraine’s attack was led by the emerging Dynamo strike partnership of Andriy Shevchenko and Serhiy Rebrov, but their efforts were not enough to win against a superior Croatian side. Croatia won comfortably in Zagreb 2-0, and despite an early goal from Shevchenko in the return leg in Kyiv, the match finished 1-1 and Croatia qualified for their first-ever World Cup, where they finished third. For Ukraine, this was the first of many heartbreaks.

For the Euro 2000 qualifiers, Ukraine was drawn in a group with recent World Cup winners France and Russia, as well as Iceland, Armenia, and Andorra. By this point, the Rebrov – Shevchenko partnership had become one of the most feared in Europe, and Dynamo Kyiv were one of best teams on the continent. They famously defeated Louis Van Gaal’s Barcelona 3-0 at home and 4-0 at Camp Nou in the Champions League group stages in 1997, with Shevchenko netting a hat trick in the latter match.

Both Shevchenko and Rebrov scored in Ukraine’s 3-2 win over Russia in the opening match of the qualifiers, and Ukraine remained undefeated for the entire cycle. On the last matchday Ukraine traveled to the Luzhniki Stadium in Russia in first place, with a one point advantage over the hosts and a two point advantage over France, who were hosting Iceland in Paris. A win would send Ukraine through automatically, while a draw meant the playoffs and defeat would see them knocked out of contention.

Russia took the lead through a Valery Karpin free kick in the 75th minute, leaving Ukraine on the brink of elimination. But, in the 88th minute, in one of the most famed moments in the history of Ukrainian football (and one of the most notorious in Russian football), Russian keeper Sergey Filimonov clumsily fumbled an Andriy Shevchenko free kick into his own net, sending Ukraine through to the playoffs.

In the playoffs Ukraine came up against Slovenia, and this time entered the match as favorites. In the opening fixture in Ljubljana, Andriy Shevchenko, by this point a star at AC Milan, gave Ukraine the lead with a stunning goal in the 33rd minute. But the home side got a goal back through Zlatko Zahovič in the 53rd minute. Then, with five minutes remaining, it was time for Ukraine to experience one of the most infamous moments in its footballing history—goalkeeper Oleksandr Shovkovskiy came out of his box to clear the ball while under no pressure, and sent it straight it to Slovenian midfielder Milenko Ačimovič, who scored into an empty net from just inside Ukraine’s half.

The second leg in Kyiv was played during a snowstorm, and though Serhiy Rebrov gave the hosts the lead through a 68th minute penalty, Miran Pavlin restored Slovenia’s advantage ten minutes later, and sent his side through on aggregate. The Ukrainians were dazed and heartbroken.

In their next attempt to qualify for an international tournament, Ukraine were drawn in a group with neighbors Poland and Belarus, along with Norway, Wales, and Armenia. Ukraine never recovered from the initial setback of a 3-1 home defeat to Poland in the very first match of qualifying, and were forced to settle for 2nd place and the playoffs yet again. This time, Ukraine met Germany, who, at the hands of England, had lost first place in their group due to a 5-1 humiliation at home.

In the first leg in Kyiv, which is memorable for the massive, full-stadium tifo display of the Ukrainian flag, the home side took the lead after Hennadiy Zubov put away Shevchenko’s deflected free kick, but Michael Ballack later restored parity in the first half, and the tie ended 1-1.

The return leg was over before it started. Germany took a 3-0 lead inside fifteen minutes, added a fourth in the second half, and only a late Shevchenko consolation made the score somewhat respectable. Once again, the playoffs proved one step too far for Ukraine.

Between Ukraine’s defeat to Germany, and their next playoff appearance, they actually qualified for a tournament – the 2006 World Cup – by finishing first in their group and avoiding the playoffs altogether. But their effort to appear at a second straight World Cup ended in a predictable manner. When qualifying, they were in a group with England, but it was Croatia who was their main adversary for second place. A 1-0 victory over England in Dnipropetrovsk on the second to last matchday was enough to secure yet another playoff spot, where Ukraine was paired up against Greece.

Both matches were incredibly dull affairs. The first leg in Athens ended 0-0 and a single goal from Dimitris Salpingidis in Donetsk was enough to knock out the zbirna, who created several opportunities but failed to get back into the match. Surely by now Ukraine fans were thinking that the playoff stage was a curse.

The most gut-wrenching of all the defeats for Ukraine in the playoffs was the most recent one. Ukraine got their qualifying campaign off to a positive start with a 1-1 draw against England in London thanks to a brilliant strike from Yevhen Konoplyanka, but things soon went downhill. Manager Oleh Blokhin opted to take the Dynamo Kyiv job and was then unable, due to illness, to perform his duties in his last two matches as Ukraine manager. With caretaker Andriy Bal on the touchline, Ukraine drew 0-0 against Moldova and lost 1-0 to Montenegro at home, which put them in a very precarious position.

After the appointment of Mykhaylo Fomenko, Ukraine’s performances improved greatly, and they conceded just two goals in the remainder of qualification while recording impressive victories over Poland (3-1 away and 1-0 at home) and Montenegro (4-0 away). They comfortably finished second and were drawn against France for the playoffs, in spite of being seeded.

After a stunning first leg performance in Kyiv that saw goals from Roman Zozulya and Andriy Yarmolenko, Ukraine traveled to Paris with a 2-0 aggregate lead as the unexpected favorites to book their ticket to Brazil. But once again, disaster struck. A dominant France had leveled the score by halftime, thanks to goals from Mamadou Sakho and Karim Benzema, and Sakho became the unlikeliest of heroes in the second half when his second goal of the match put France through to the final tournament. It was pure agony for Ukraine fans and players.

Five playoff appearances, five defeats. Ukraine now have a chance to end their unfortunate losing streak, and to exorcize some past demons in the upcoming matches against Slovenia. History may not be on their side, but in matches like these, history counts for very little. It is the psychological barrier of playoff failure that Ukraine’s players must overcome to earn a spot in France next summer.