Dynamo Kyiv have sold forward Júnior Moraes to China, but the emergence of young star Artem Besedin has meant that the lose of the Brazilian can be easily compensated.

One minute into stoppage time at the NSK Olimpiyskiy, Dynamo Kyiv looked headed for a disappointing 0-0 draw with Olimpik Donetsk. The home side dominated possession but created little in terms of quality goalscoring opportunities, and an even result would not have flattered the visitors.

Then Dynamo won a corner, and it was 20-year old striker Artem Besedin who outjumped everyone else to head the ball past Olimpik’s stranded keeper Zauri Makharadze. 1-0 was the final result, Besedin’s goal ensuring that Dynamo grabbed all three points.

This goal does not have implications for the title race, which is all but over. With Shakhtar 13 points ahead of Dynamo, the Hornyaki would have to suffer a historic collapse to lose their grip on the Ukrainian Premier League title. A draw against Olimpik would have been a disappointing result, but the difference between a 13 and 15 points gap is negligible.

Besedin’s dramatic winner, however, is reflective of a shift in how the Dynamo management run the club. Many were surprised when the club announced that their Brazilian striker Júnior Moraes was departing on loan to newly promoted Chinese Super League side Tianjin Quanjian. With ten goals, Moraes was the leading goalscorer of Dynamo and the entire league.

But after Moraes punched no fewer than three Shakhtar players and was sent off in the last match before the winter break, he received a five-match ban from the disciplinary committee and was therefore not available for the opening matches of the spring part of the season. 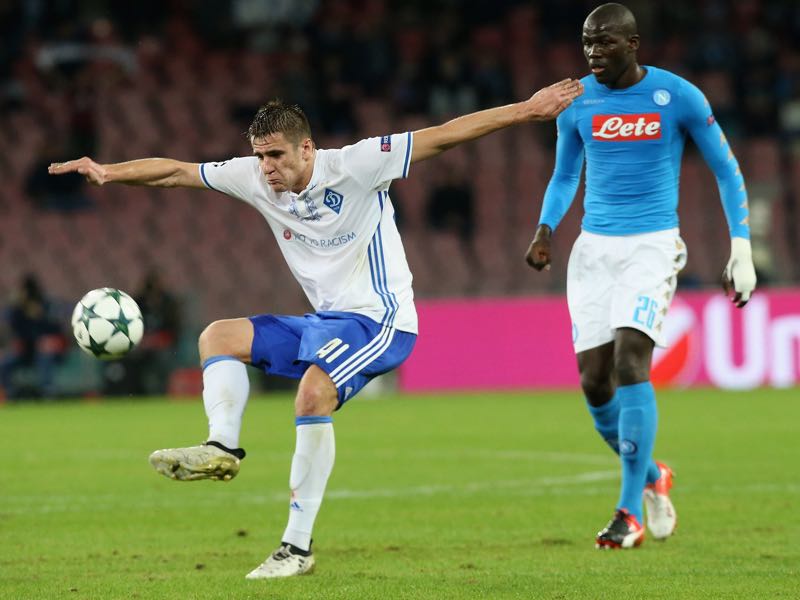 After already featuring for Dynamo in the Champions League group stage Artem Besedin should see his playing time increase even further in the second half of the UPL season. (Photo by Maurizio Lagana/Getty Images)

Dynamo manager Serhiy Rebrov said that the lengthy disqualification of Moraes was a factor in the loan deal, but ultimately financial considerations were decisive. The striker reportedly got a hefty pay increase and the club received €2.1 million for the loan. While this number may pale in comparison to the astronomical offers coming from China in recent months, it is a substantial sum for Dynamo, who are still adjusting to the current financial realities.

Besedin expressed regret at the departure of his teammate: “I was even a little bit upset at the transfer of Moraes, because I had a lot to learn from him, and it was pleasant to work with him. I will do everything I can to justify the trust of the coaches.”

Upset or not, Moraes’ move to China presents a golden opportunity for Besedin, who had already firmly established himself as the second-choice striker in the first half of the season. He has now scored in Dynamo’s last four matches dating back to December, and has recorded the winner in both league fixtures of 2017 so far, including the late header against Olimpik.

Moraes was not the only Dynamo striker to depart in the winter, as the perennially disappointing Oleksandr Hladkiy was also sent on loan, with the Ukrainian headed in the opposite direction to Karpaty Lviv. With both of the more established strikers now gone, the door is open for both Besedin and 21-year old Roman Yaremchuk, who spent the first half of the season on loan at Oleksandriya.

Having a forward line consisting of two inexperienced strikers barely in their twenties is perhaps not a situation that Dynamo are used to finding themselves in over the past decade. But with the financial might of the club on the decline, an investment in local youth may well be the direction of the future. 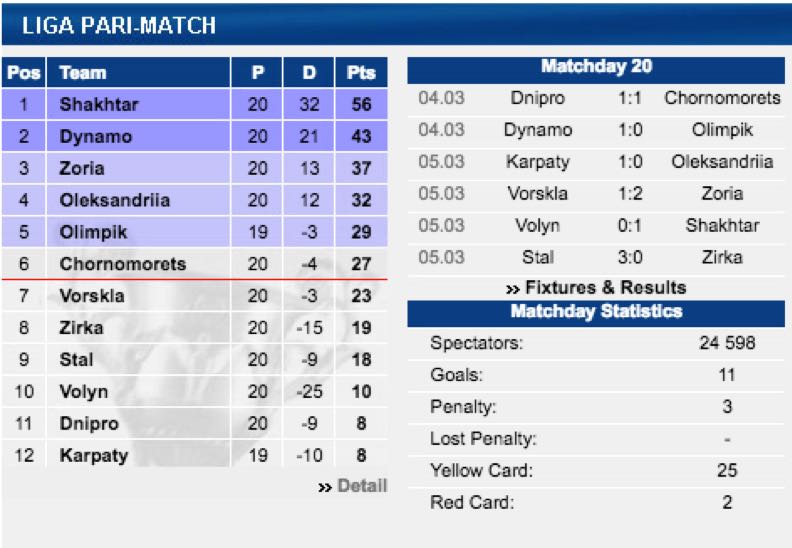 The Ukrainian Premier League after matchday 20.