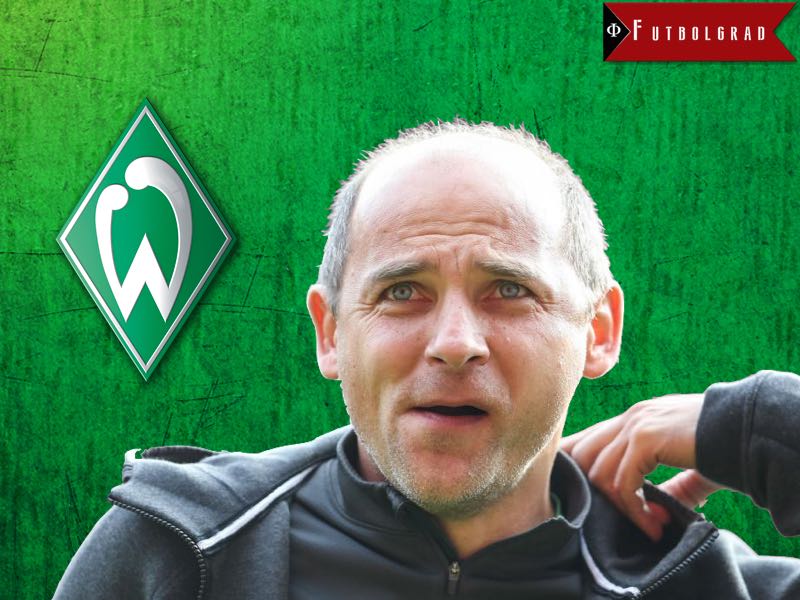 Viktor Skripnik and the Downfall of Werder Bremen

The season started with an embarrassing defeat in the first round of the DFB Cup to 3. Liga (third division) Sportfreunde Lotte on August 22. One week later Werder Bremen were unceremoniously dismantled by FC Bayern München, who scored six unanswered goals to rack up the highest victory on the opening day of the Bundesliga.

Viktor Skripnik’s dismissal – The writing was on the wall

At that point the writing was on the wall for Viktor Skripnik. No one in Germany was surprised about Werder’s defeat against one of the best teams in the world. But it was the how that mattered.

The #Bundesliga opener finishes 6-0 in Munich, a start to forget for #Werder. // #fcbsvw pic.twitter.com/nxQCtagvJE

Werder was once considered Bayern’s closest rivals. Indeed the club from northern Germany was often considered the quiet counter balance to the glamorous club from Bavaria, which rightfully carries the nickname FC Hollywood.

Glamour and glitz in Munich was opposed with the down-to-earth business model of the Werder Familie (Werder Family). In the 1990s and early 2000s this model worked. Werder was a constant threat to Bayern’s hegemony, and the Grün-Weissen won the title in 1993, and 2004.

In eight seasons between 2004 and 2010 Werder Bremen qualified seven times for the group phase of the UEFA Champions League. Yet at the same time stagnation set in.

Indeed the Werder Familie, once the backbone of the club, was now its biggest problem. The coaching staff and the management consisted of people with Werder history. Longstanding coach Thomas Schaaf was also a former player. Assistant coaches and the management had been part of the club for decades.

Outsiders often had a difficult time establishing themselves, and as such Werder had a hard time to adapt to the new realities of Bundesliga football.

In some ways the recent firing of Viktor Skripnik is exemplary of this. Skripnik, although born in Ukraine, has been a member of the Werder Familie since 1996 when he joined the club from Dnipro Dnipropetrovsk as a player.

After retiring from professional football in 2004 Skripnik was given a job by Werder as a youth coach. In 2013 he became the head coach of Werder Bremen II in the Regionalliga Nord (fourth division). Werder II played well and finished the season in second place.

Hence, when Werder fired head coach Robin Dutt, whose attempts to introduce new structure was undermined by poor football, the club promoted Viktor Skripnik to the position as the new head coach.

Skirpnik at the time was indeed perfect for the job. Someone from inside the club, who it was believed would be able rekindle the spirit of the Thomas Schaaf era. Early signs were promising, as Skripnik seemed to merge the old Werder Raute—a 4-4-2 system with a midfield diamond—with the Valery Lobanovskyi’s football school.

In 2014-15, Skripnik first season at the club, Werder’s style of play was often reminiscent of the early 2000s when the club played the most offensive-minded football in the country. In the end Skripnik would guide the club to a tenth place finish just three points out of a Europa League spot.

At that point there was promise that Skripnik could guide the club to a new era. But unfortunately for Werder, Skripnik’s success proved to be short-lived, as the following season almost ended in disaster with the club avoiding relegation on the final day of the season.

At that point sporting director Thomas Eichin, who was hired by the club in February 2013, already wanted to replace Skripnik with a new coach. But Eichin was an outsider from the Werder Familie.

Thomas Eichin was unable to introduce a culture change

Furthermore, Eichin was also seen as an outsider in the football business, as the former football player had developed an ice hockey management career rather than football. Between 1999 and 2013 he worked in various functions at the Deutsche Eishockey Liga (DEL) club Kölner Haie, whom he guided to various national and international titles.

Hence, when Eichin was brought in in 2013 the idea was that he would reform Werder and build a brand not dissimilar to what he had done in hockey. Eichin oversaw the promising start with Viktor Skripnik, but after barely escaping relegation last season Eichin believed that it was time for a cut, and that a new coaching crew should be brought in.

But the club’s directors believed that Skripnik was the right man for the job. At the same time several players set out an ultimatum to the club stating that they would not continue to work under Skripnik.

Austrian midfielder Zlatko Junuzović, and the Danish defender Jannik Vestergaard both made it clear that they could not see their future in Bremen if Skripnik continued in his role as the head coach.

With several players on his side it was believed that Thomas Eichin would win the power struggle at the club, and that Skripnik would be gone. But instead it was Eichin who was forced to leave, as he was replaced with Frank Baumann, a former Werder Bremen player. Eichin is now at 1860 Munich where he has been quite successful introducing new structure into a club that up to this point was more or less unmanageable.

Baumann managed to convince Junuzović to give Skripnik a second chance, Vestergaard, however, made the move to Borussia Mönchengladbach, as the tall Dane did not believe that Skripnik could overturn the fortunes at the club.

From euphoria to disappointment

What followed was a summer break full of euphoria, as Baumann managed to sign several promising players, among them Max Kruse, Florian Kainz, Serge Gnabry, and Robert Bauer.

What came next were injuries for Max Kruse and superstar Claudio Pizarro, as well as a DFB Cup first round exit. Next came the above-mentioned destruction by Bayern München during which Werder at no point looked like a first division club. A close defeat to Augsburg somewhat was followed by another heavy beating.

This time it was Borussia Mönchengladbach that ran circles around Werder Bremen, as Gladbach scored four goals in the first half to win 4-1. Indeed Werder was fortunate that Gladbach failed to put away various chances, which could have run up the score even higher in their favour.

#Skripnik has been dismissed with immediate effect, #Nouri will take over on an interim basis. More info to follow. pic.twitter.com/RbJtRRtPVS

At this point Baumann had no choice but to dismiss Skripnik on the bus ride back to Bremen—Skripnik will, however, remain at the club as a youth coach.

In many ways the episode is synonymous with the problems that Werder has faced in recent years. The club would benefit from outside reform, but true reformers, like Eichin, were dismissed when they tried to make changes that could fundamentally hurt the family.

Indeed it would have been much easier to make a cut at the end of last season, rather than trying to hire a new coach who will now face the thankless task of steadying the Werder boat.