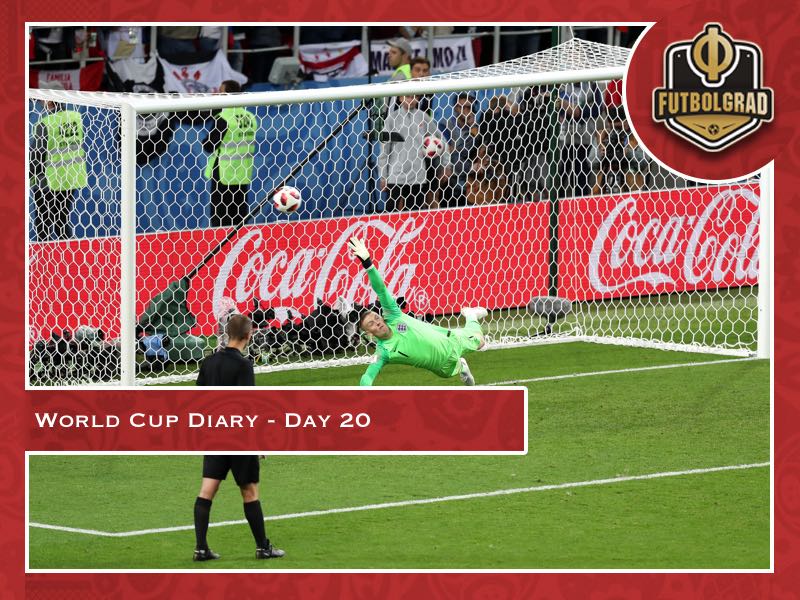 World Cup Diary – Day 20: England win on penalties (this is not a joke)!

Day 20 of the World Cup is in the books, and we can report on the biggest surprise, no biggest shock in World Cup history. England have beaten a team on penalties at a knockout stage match of a major tournament. England, however, were not the only big news story of this day 20 as we also headed to the FARE refugee tournament on Red Square and witnessed Sweden advancing to the quarterfinals.

Football can be a huge catalyst for integration but also a vehicle to highlight social problems in a country. We have already emphasized that on the Futbolgrad Network when we visited the Aniko project in Thessaloniki in May.

While Russia is hosting the most excellent show on earth, it is easy to forget that this country is also involved in conflicts in Syria and elsewhere. Leaving the politics of that conflict aside Russia, despite their involvement there, have only taken one refugee from Syria.

The refugees, hailing from Cameroon, Zimbabwe, Ivory Coast, Syria and Afghanistan split into four teams and wore shirts with a slogan that read “Refugees welcome.” The Russian Football Union’s (RFU) anti-racism and discrimination inspector and former Russia captain Alexei Smertin played for one of the teams.

Asylum seekers and refugees are one of the most under-discussed topics in Russian society in general. The Futbolgrad Network spoke to members of FARE and learned that some of the displaced people taking part at the tournament have come to Russia also in the hope of landing a lucrative football contract.

The trade of players, lured to the post-Soviet space by shady agents, is another topic that has been touched on by the Futbolgrad Network in the past. FARE hopes that a football tournament on Red Square could create some awareness among Russian citizens about what is going on in their country.

At the same time, it almost appears that the topic is somewhat lost among local media. While there are plenty of foreign outlets, present there is a certain sense that the regular visitors to the FIFA Football Park on Red Square have very little awareness of what is happening right under their noses. Most of the focus instead seems to be on the colourful Colombia fans and the fan shop and the various sponsorship pavilions present in the Football Park instead.

From the FARE tournament back over to the World Cup. Sweden are through to the quarterfinals after another impressive performance. The Blågult have been impressive at the group stage where they topped a group that included Mexico, South Korea and dethroned world champions Germany – although they lost to Germany at the group stage that game against the current world champion perhaps showed the very essence of this Sweden side.

Hard working and efficient Sweden are excellent when it comes to their transition game through the midfield.

It was that transition game that caused both Germany and then Mexico who were beaten 3-0 by Sweden on matchday 3, massive headaches in the group stage. The third victim is now Switzerland, who on paper also have a more talented side than Sweden.

Head coach Janne Andersson was criticised ahead of the tournament for leaving out Zlatan Ibrahimovic. But now in retrospect, Sweden have been a force that seems to excel as a unit rather through its brilliance – although RB Leipzig midfielder Emil Forsberg has been excellent.

Switzerland, in the meantime, never found a way through despite dominating possession. “Of course Sweden have never been called favourites,” Switzerland head coach Vladimir Petkovic told the media following the game. “Everyone has been doubtful saying, they are mediocre. They are not. They are very powerful, united and have a good physical condition. When they score, they are an extremely tough nut to crack.”

In fact, Sweden’s victory brings about another example of a possession team struggling to advance deep into the tournament and with Sweden now facing an England side that will be forced to take the initiative there is no telling how far the Swedes could go.

That Sweden performance against Switzerland should be a warning for England of course. But before we get to that we have to talk about the most historic event in World Cup history – England have advanced after winning on penalties in a knockout match for the first time in history.

But before we get there, we have to talk about the match first. After all, it was a bit of a dour affair between an England side that showed significant weaknesses throughout the 90 minutes and a Colombia team that was missing their most important player in James Rodríguez.

Without the Bayern midfielder, Colombia heavily relied on their physical play disrupting England wherever possible. Missing their playmaker though meant that it took until the 80 minute for Colombia to finally get some structure in the match.

At that point, England were up by one goal – a penalty, which was also their only shot on goal. The goal came, of course, by Harry Kane who now has six goals at this tournament. Colombia, who were the better side in a game that lacked real structure, equalised in the 88th minute via a Yerry Mina header following a corner kick. 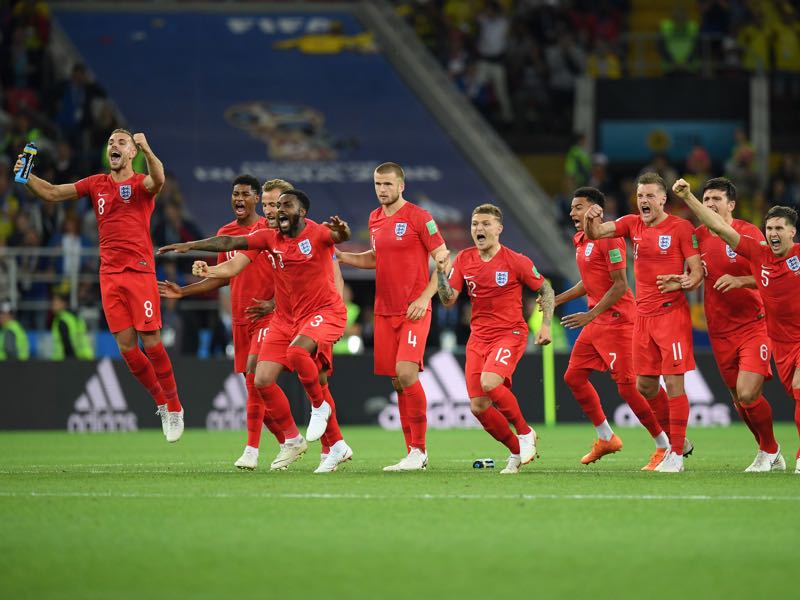 England players celebrate the penalty save by Jordan Pickford from Carlos Bacca of Colombia during the 2018 FIFA World Cup Russia Round of 16 match between Colombia and England at Spartak Stadium on July 3, 2018 in Moscow, Russia. (Photo by Matthias Hangst/Getty Images)

Extra-time and penalties seemed to bring yet another heroic defeat for England. Colombia were the better side in additional time but could not get the job done. Then in penalties, many Colombians were celebrating when Jordan Henderson missed his shot. But England collected itself and when goalkeeper Jordan Pickford, who was perhaps the best player that night, saved Carlos Baccas shot the road was clear for Eric Dier to write history and send England through after a penalty shootout.

The question on everyone’s mind now is how far can this England side go? Gareth Southgate has certainly managed to forge a collective and team spirit that we have never seen from a Three Lions squad before. At the same time, there are some significant weaknesses in the side. Holding midfielder Jordan Henderson, for example, completed just 70.8% of his passes and overall the Three Lions managed to finish just 76% of their passes (Colombia managed 80%).

England’s next opponent Sweden have capitalised on even fewer misplayed balls than England played last night against Germany and Switzerland. For now, however, the “football is coming home” story is a nice narrative among the England fans here in Russia as the Three Lions now meet Sweden.

That is it for today. The Futbolgrad Network is now off to Sochi to see Russia vs Croatia and on Saturday. Also no games today or tomorrow so enjoy your World Cup break. Until next time do svidaniya!