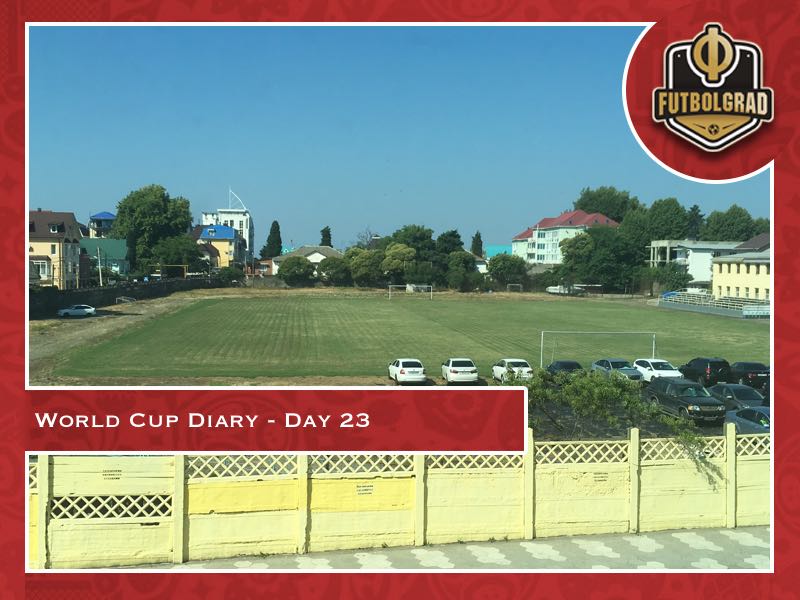 After a two day break the World Cup is back underway. But I ended up missing most of the action as I spent 24 hours on a train travelling south from Moscow to Sochi.

The free trains for fans and journalists have been one of the best parts of this 2018 FIFA World Cup. In many ways, the train encompasses the Soviet and post-Soviet experience.

No other country on the planet is more defined through the time that its citizens have to spent o trains. Despite the breakup of the Soviet Union, in which 14 Soviet Republics declared their independence, Russia remains the largest country by land mass.

All of this are things I am keeping in mind as I am boarding my train from Kazan Station in Moscow to head down to Sochi. After all, 24 hours are nothing given the size of this country. Furthermore, I am a bit of a veteran having taken the Trans-Siberian railroad from Moscow to Irkutsk (in 2003) and the train from Beijing to Munich (in 2007).

At this tournament I have taken the train on three previous occasions, twice to Saint Petersburg and once to Kazan. Hence, the trip down to the Caucasus on a train was still missing in my collection.

The World Cup experience on a train

There is an odd mix between the typical train travel experience and the overall World Cup experience. Taking a train anywhere during this tournament means that you come in contact with various fans from various countries.

On this trip the vast majority of fans were Russians. But there were also some Argentina and Brazil fans on the train that had envisioned a bit of a different root for their country.

We even encounter a couple of fans from Zimbabwe, who had followed Nigeria throughout this tournament. The two quickly become targeted by a Championat.com reporter after he finds out that one of them supports Chelsea.

“What do you think of Aleksandr Golovin?”, the reporter asks. The Russia midfielder Golovin, of course, has been linked with a move to Chelsea in recent weeks and the Zimbabwean/Chelsea fan quickly jumps into a description of a player that he has never seen before.

One of my favourite moments on the way to Sochi today. Russia fans singing the national anthem. pic.twitter.com/9VZX08GCA6

Not that it matters. This trip is not about football expertise but rather about the coming together of different countries. The bar on the train seems to be the perfect place for this.

Songs a sung, with the Argentines bringing most of the atmosphere to the restaurant wagon. But the Russians add their very own flair when they sing the national anthem and the Russian army song Katyusha.

The football experience on the train

The main question on the train, however, is – how are we going to watch the football. The internet on the trip down is at best patchy and most of the time non-existent.

We are somewhat lucky during the first game. We catch most of the first half while we are stopped for a locomotive switch in Liski. I am told Liski is famous for its baked goods. During the time of the Soviet Union, it was also renamed Georgiu-Dezh to honour a Romanian communist-leader – what an honour! 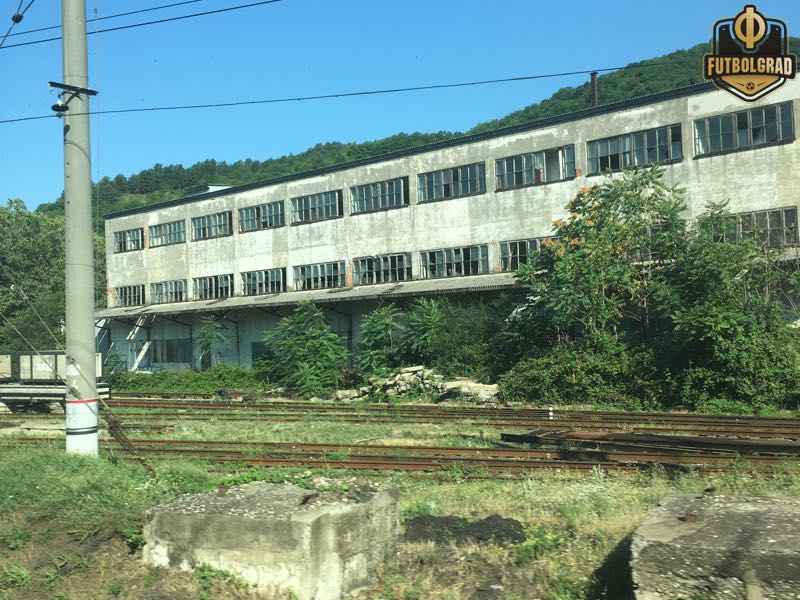 Most importantly, however, the LTE network is stable on our phone, which means we can catch the two France goals against Uruguay. After the 75th minute, the feed dies, but that is okay the game was very much over at that point with France advancing to the semifinals.

At this point, the bar somewhat empties out. The non-stop consumption of beer and the lack means that many are heading to their cabins.

As we are slowly heading south, the landscape rarely changes. Rolling hills and fields dominate the picture outside the window. I have to think of my grandfathers. Both fought here for the Wehrmacht, and both always highlighted the helplessness they felt when they looked at the endless rolling hills that felt almost like an ocean rather than a landmass.

Those thoughts are only disturbed by the question of how we are going to watch the second game. Somewhere between Liski and Podgorenskiy, the internet had completely cut out. Thankfully, the Russian Railways have a radio service on board. So we go old school and listen to how Belgium score twice (Fernandinho OT and Kevin de Bruyne) in the first half having the next World Cup favourite on the brink of elimination. 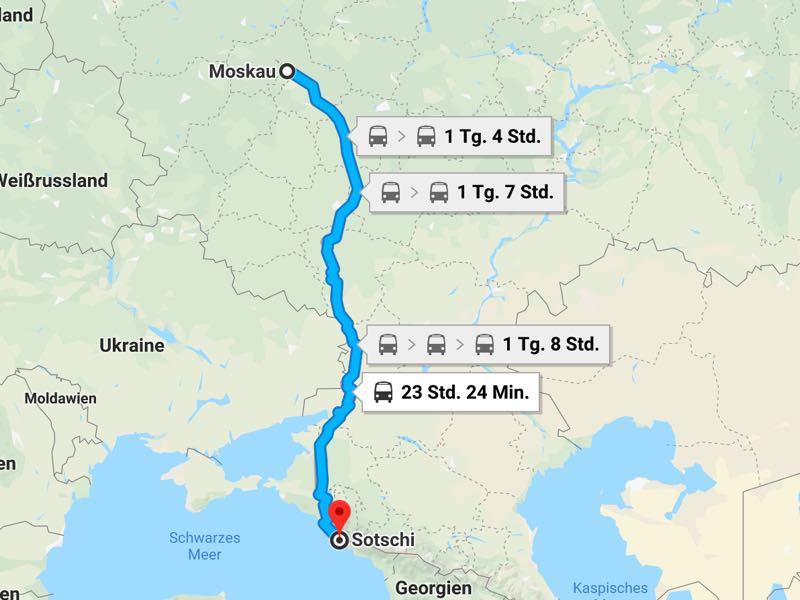 The route from Moscow to Sochi (Via Google Maps)

Then in the 76th minute, Renato Augusto pulls one back for Brazil. Four minutes later the radio is gone. For what appears an endless ten minutes my roommates and I  don’t know what is going on. Then all of a sudden the radio and the internet is back on.

Perhaps it was because we were briefly in Ukrainian territory, as the train cuts through a small piece of the Donbass on the way south. Anyhow the internet is back on, and we frantically scramble to get the Match TV stream up to watch the game.

It is worth it Belgium hang on to beat Brazil and will now face France in the semifinal in St. Petersburg.

With the end of the game, the train goes quiet. Only the Argentinians are still roaming the hallways singing songs about Brazil going home and Lionel Messi and Diego Maradona winning the camp – they are, however, quickly shut down by a load and angry voice coming from a conductor. 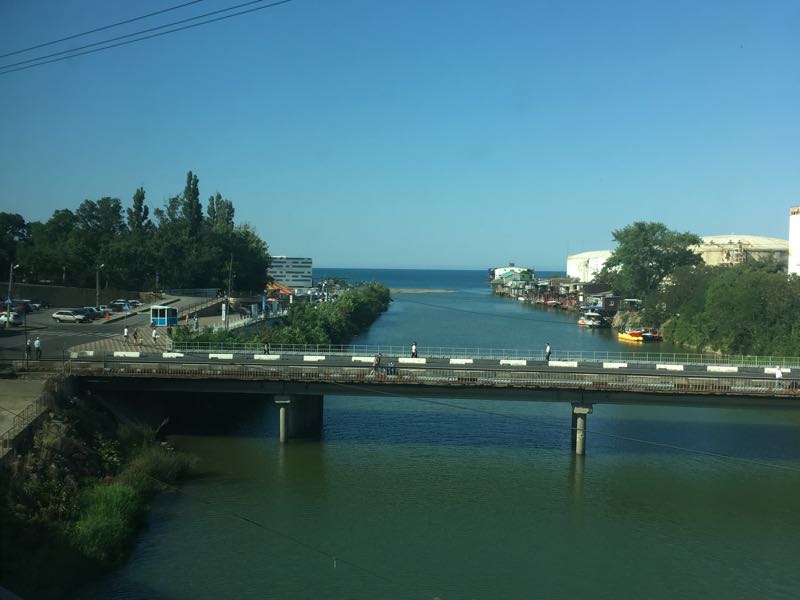 The first glimpse of the Black Sea (Manuel Veth/Futbolgrad Network) 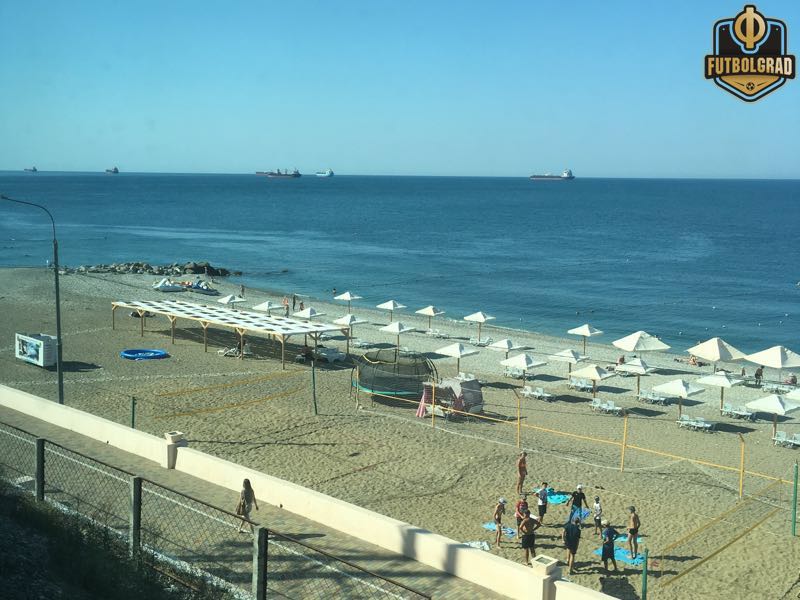 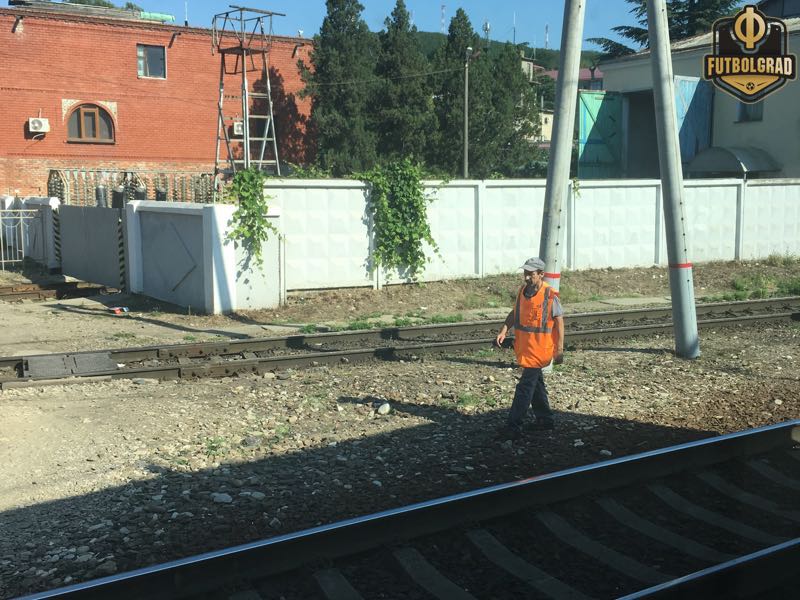 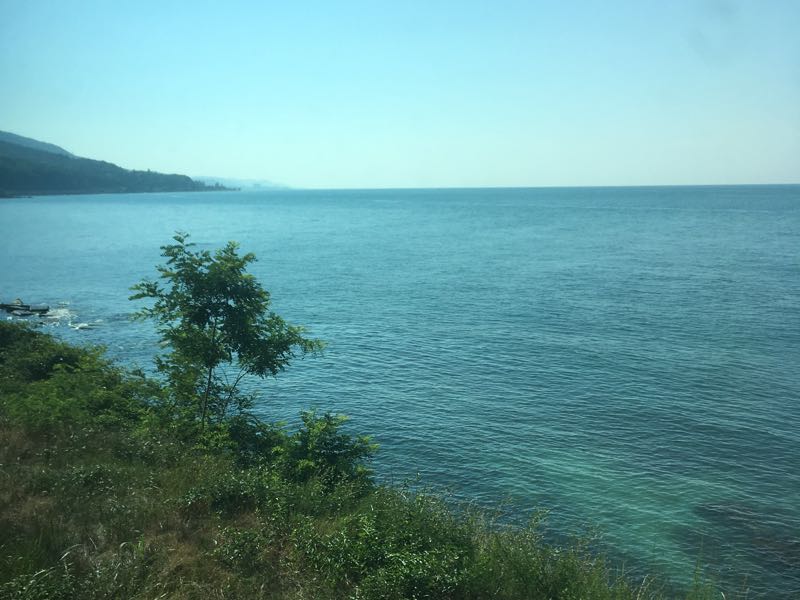 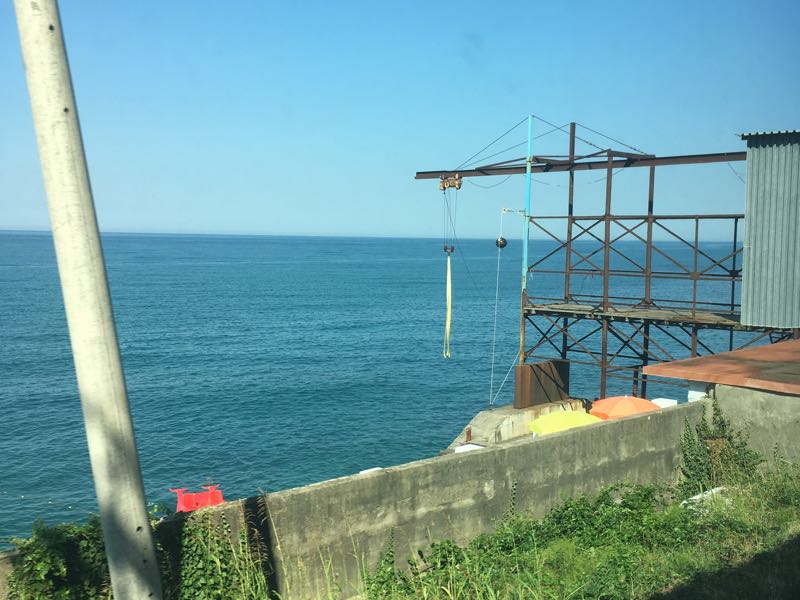 The train goes quiet and even during our stop in Rostov we only briefly hear the hushed voices of people joining the trip. When we awake, the landscape has changed dramatically.

We are no longer in the black earth region of the Russian Federation but in the Krasnodar Krai, which signals the beginning of the Northern Caucasus. Instead of grain fields, the greenery quickly becomes more sub-tropical, and the train soon reaches the shores of the Black Sea.

Once there we pass beach after beach on the way south towards Sochi and after 24 hours on the train, we finally arrive. But even as we roll into Adler, the trip isn’t over. Booked at the Tropicana Hotel, I call a Yandex, exhausted I am looking forward to a long shower my cap driver takes a full 90 minutes to finally find the hotel. But perhaps that is a story for another day…

Well until tomorrow, do svidanye from Sochi.