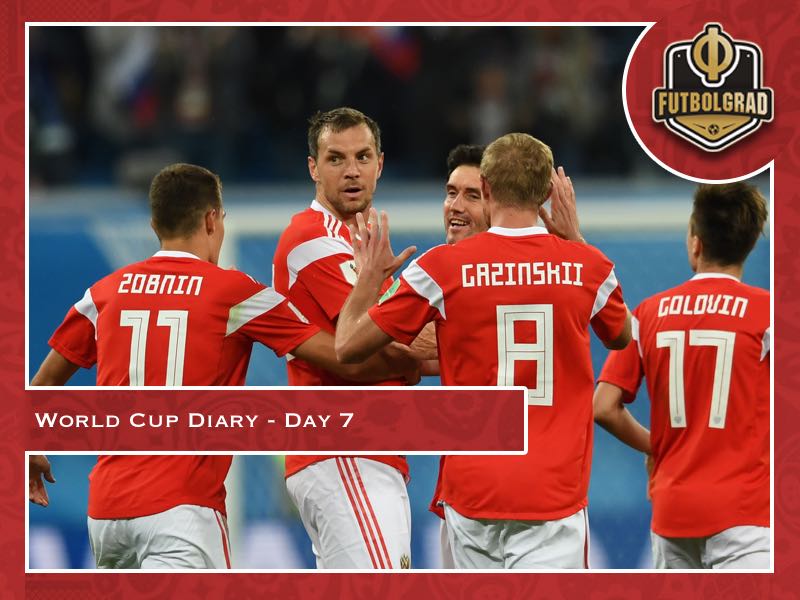 Back on the train from St. Petersburg to Moscow it is time to recap yesterday’s events. Russia dazzled against Egypt winning their match 3-1 scoring goals six, seven and eight – the most by a host nation since Italy in 1934 – and surprise the world with their surprisingly refreshing football. Hence, on this day seven recap it is all about Russia and their surprise result against Egypt.

You read it right. Russia’s first two matches have produced the most goals by a host nation since Italy scored eight goals at the 1934 FIFA World Cup. Back in 1934, however, the tournament was a straight knockout tournament, and Italy scored seven goals in their 7-1 win against the United States in the round of 16 and then scored one more goal in the 1-1 draw in the quarterfinal against Spain – Italy eventually advanced after the match was repeated (1-0).

It is hard to compare the two eras. Italy in 1934 had a strong side that would eventually move on to win the tournament. Russia by many accounts are still seen as an outsider at best. In fact, the eight goals scored against Saudi Arabia and Egypt are more than even the most hardcore Sbornaya fans hoped for.

Saudi Arabia and Egypt were not test

There was a sense that Russia could struggle against the likes of Saudi Arabia and Egypt. After all, the Sbornaya were the lowest ranked team – placed 7oth in the FIFA world ranking – entering the tournament behind Saudi Arabia. But the fall in the standings was mostly due to head coach Stanislav Cherchesov picking strong opponents for friendly matches.

In front of the stunning Krestovsky Arena. My thoughts on the #Sbornaya defeating Egypt to reach the next round of the #WorldCup. #RUSEGY pic.twitter.com/QRWputARF4

“Friendly matches are friendly matches. This is the World Cup it is a different story”, striker Artem Dzyuba told the journalists in the mixed zone following the game. In that sense he is right. The likes of Brazil, France, Spain and Argentina, all nations Russia faced in the buildup of the tournament, cannot be compared with Saudi Arabia and Egypt.

So where do we rank this Sbornaya side? Going into the tournament seven matches without a win Russia have now shown that they are a better side than many expected. But the true strength of the side will not be seen until they face Uruguay on matchday 3 in Group A.

It is hard to believe that Dzyuba was sent to exile by Zenit just a few months ago. Deemed surplus material the forward was loaned out to Arsenal Tula and last winter nobody expected him to be in this Russia side. Now two matches in Dzyuba has scored two goals and has taken over the starting position from Fedor Smolov, who was going into the tournament was considered the country’s biggest star.

It was, therefore, no surprise that Dzyuba was laughing and smiling with the journalists in the mixed zone following the game against Egypt. At the same time, he was surprisingly humble. “We have to continue to work hard, and we have achieved nothing yet,” Dzyuba stated what sounds like pretty common phrases coming from a footballer after a match. But from his mouth, on that night, they sounded earnest and showed that Dzyuba appreciates his time in the squad.

Meanwhile, Denis Cheryshev won the Futbolgrad Network man of the match against Egypt. The attacking-midfielder has always been a bit of an outsider in the squad after spending most of his life in Spain where his father played professional football. Despite playing in a top European league, Cheryshev was, therefore, often ignored by the Sbornaya. That has now changed as the attacking midfielder scored three goals in the first two matches after coming on to replace the injured Alan Dzagoev in the match against Saudi Arabia.

Both Dzyuba and Cheryshev were fantastic against Egypt, and they are now becoming the face of an underdog Russia side that is finally bringing some hope to its fans.

Russia is finally entering the party

Speaking of Russia fans. The Egyptians it felt at times seemed to be in the majority on Tuesday night at the Saint Petersburg Stadium. Only after Russia started to dominate Egypt did Russian fans start to take over and even then it was only quietly at first – almost in a bit of disbelieve.

That disbelieve turned into a real party following the match. Nevsky Prospekt in St. Petersburg was turned into a massive party zone with many people partying into the late hours. It was the first time Russians proper joined the World Cup party. Previously they were almost timid about partying perhaps unsure on their side’s prospects. Now after the victory against Egypt, the party seems to be on for Sbornaya fans as well.

Anyhow that sums up my World Cup day seven diary. Until tomorrow.

Privet from a train somewhere in Russia.

Loading...
Newer Post
France will need to step it up a gear against a creative, but misfiring, Peru
Older Post
Germany need to reset tactical approach after Mexico defeat