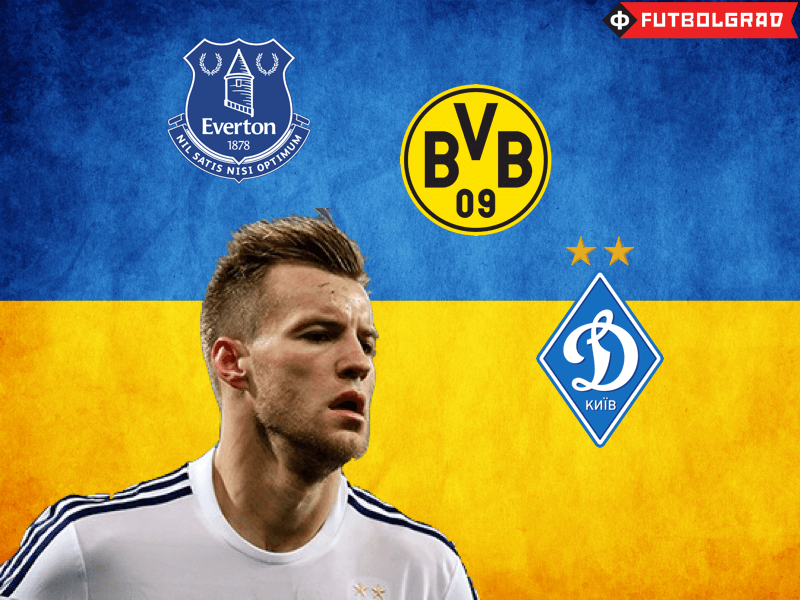 Andriy Yarmolenko, who is Ukraine’s second all-time leading scorer (following Shevchenko’s 48 goals) has scored 22 goals in 55 appearances, and 13 goals in 22 appearances for Dynamo Kyiv this season. Yarmolenko has also often been called the next Shevchenko—a comparison that can be misleading, as their style of play doesn’t compare well. Following his performance at Euro 2012, reporters were quick to claim that he would arrive to AC Milan or Chelsea, two of Shevchenko’s former clubs, and thus destined to repeat the heroics of his international teammate.

Yarmolenko’s contribution to his club and country has certainly not gone unnoticed: he, in addition to international teammate Yevhen Konoplyanka, was a major talking point during the winter and summer transfer windows in 2015. While Konoplyanka finally made a move from Ukraine to Spain, moving to FC Sevilla, Yarmolenko has opted to remain in Ukraine for the time being.

His decision to stay at Dynamo following the summer 2015 transfer window does not mean, however, that various European clubs have lost interest in him. Yarmolenko’s most notable performance was during the in the Round of 16 in the 2014–2015 Europa League in Dynamo’s aggregate victory against the English club Everton. Since the summer he also played a vital role in Ukraine’s Euro 2016 playoffs versus Slovenia, where he scored in both fixtures. These contributions have led to interest from numerous clubs – with Everton and Borussia Dortmund reportedly coming close to signing the Ukrainian last summer, now being the most recent candidates to land the Ukrainian’s transfer from Kyiv.

At first glance a move from Dynamo Kyiv to Everton would make sense. In addition, the decline of Steven Naismith and Kevin Mirallas, as well as their lack of game time, suggests that Everton are in need of a new offensive midfielder. Should a move develop, Yarmolenko would fulfill this role. Finally, Yarmolenko has publically announced that despite his contract extension with Dynamo Kyiv, he is in search of a move from Ukraine to another league. Such a move would see him further develop his skills and career. Yet despite observations and the reports in the English media, a transfer to England is unlikely during the winter 2016 transfer window for numerous reasons.

First, the Ukrainian international played a pivotal role in Dynamo Kyiv’s Group Stage matches in the 2015–2016 Champions League Season. Despite what many believed, the Ukrainian Club finished second in its group (behind Chelsea, and ahead of Porto and Maccabi Tel Aviv) and qualified for the Round of 16. Therefore, Dynamo Kyiv’s club President Ihor Surkis might be reluctant to offload his star player in the winter.

Dynamo also lacks a natural replacement for the Ukrainian, which in turn would create a void in Dynamo’s midfield, especially given the fact that the club has already unloaded Younes Belhanda (Schalke 04), and Artem Kravets (VfB Stuttgart).

Then there is the fact that reports have emerged in Germany that Borussia Dortmund has renewed its interest in bringing over the Ukrainian winger. Borussia has recently sold Jonas Hofmann to Borussia Mönchengladbach, and chose to end Adnan Januzaj’s deal early—he was on loan from Manchester United—but failed to adjust to the up tempo game of the Bundesliga.

Borussia Dortmund the most likely Destination

Borussia’s front staff has been adamant about the fact that they would like to bring in a replacement for the two offensive midfielders this winter. Hans-Joachim Watzke has told Transfermarkt.de that the club would like to “raise the level of the squad.” Germany’s Sport Bild then reported on Thursday that Borussia are once again interested in signing Yarmolenko from Dynamo Kyiv, and that the club would be willing to meet Dynamo Kyiv’s €30 million demand for the player, as Borussia wants to make a statement in the Bundesliga that they are once again ready to compete with their major rivals Bayern Munich.

Dortmund have been linked with several other high profile players this winter, including the Serbian Andrija Živković, and the Brazilian Malcom. Živković is a free agent as of July 1st, and as Futbolgrad has reported he will most likely move to Dortmund in the summer. Malcom’s contract at Corinthians on the other hand is a difficult third-party ownership construct, added to the fact that young Brazilians can have a hard time adjusting to life in Germany it is unlikely that Borussia would make a move for him.

All of this leaves Borussia Dortmund as the most likely candidate for a Yarmolenko winter transfer, especially given the fact that Borussia will most likely return to the Champions League next season. At the same time Surkis and Dynamo have proven to be difficult negotiation partners in the past, which led to a failed transfer last summer. Hence, it remains a likely scenario that Yarmolenko could see out the end of the season at Dynamo Kyiv.