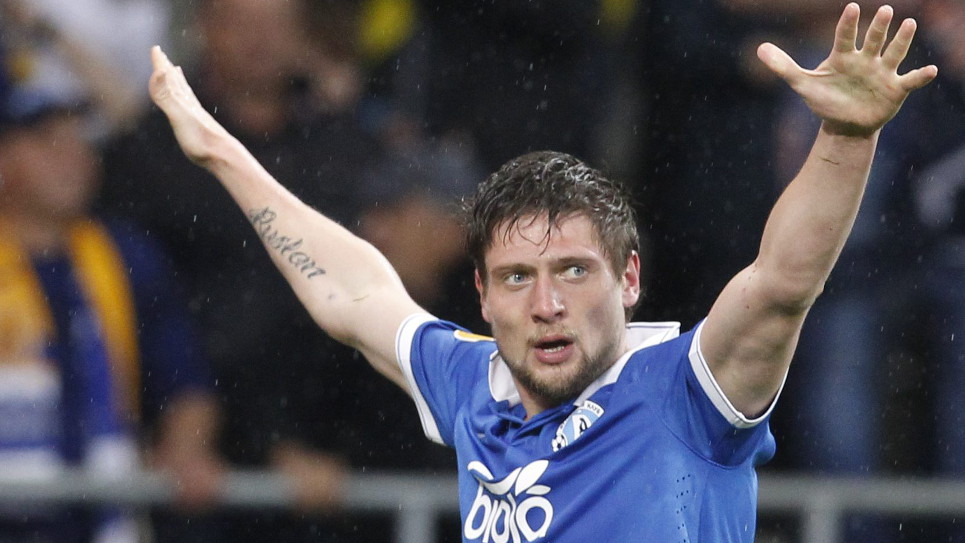 “Tommy Smith wasn’t born, he was quarried” said the great Bill Shankly when describing his rugged, reliable defender. The same description could also be applied to Dnipro Dnipropetrovsk forward Yevhen Seleznyov, who is very much a product of the industrial heartland of eastern Ukraine.

Seleznyov’s birthplace, the city of Makiivka, is located in the northeast of Donetsk in the heart of the Donbass region. To compare it to England’s industrial history, it is to Donetsk what Salford is to Manchester, only with metal and coal, rather than cotton and silk.

Given Seleznyov’s mentality on the pitch, he would be an ideal candidate for a job in one of Makiivka’s factories, but their loss is football’s gain. The target man brings his working class roots onto the football field, with a tireless work rate and a never say die attitude when challenging for even the most lost of causes.

Seleznyov’s stubbornness when leading the line gives defenders a constant headache. A good example of this was Seleznyov’s performance against Napoli in the semi-final of the Europa League. He scored both Dnipro’s goals in the 1-1 draw at San Paolo in Naples in the first leg, and also scored another in the second leg to take his side through to the final.

Seleznyov’s goal in Kyiv in the second leg is especially emblematic for the attacker. Napoli defender Miguel Britos did everything he could to bring Seleznyov down, knowing full well that referees rarely give penalties for this type of wrestling in the box. But in the end Seleznyov battled through, and converted Yevhen Konoplyanka’s cross.

Dnipro have been playing their Europa League home games at the NSK Olimpiyskiy in Kyiv as UEFA deemed Dnipropetrovsk unsafe for international matches, due to its close proximity to the war in Donbass. Seleznyov’s goal was not only befitting to this wonderful arena, it also gave hope to an entire nation, which had rallied behind Dnipro Dnipropetrovsk.

While most forwards would have thrown themselves to the ground, appealing in vain for the spot kick, Dnipro’s number eleven rose to meet the ball and nodded it into the net with Britos flailing below him. Despite his semi-final heroics, the striker was left out of his side’s starting eleven for the final in Warsaw due to a lack of fitness, with manager Myron Markevych opting to go with Croatian forward Nikola Kalinić.

Kalinić appeared to have justified his inclusion when he scored the opening goal of the game in the seventh minute, but Sevilla came back into the game with both Grzegorz Krychowiak and Carlos Bacca scoring, with the latter’s brace carrying the Spanish side to victory. Seleznyov replaced Kalinić after 78 minutes with the score at 3-2, but was unable to get the goal to bring Dnipro level.

It would be convenient to say that things might have been different had Seleznyov started the game, but Sevilla were impressive going forward, and the day belonged to their Colombian striker, Bacca, who ended up scoring two goals. Seleznyov would have been a different proposition for the Sevilla defenders, and may have worn them down mentally as well as physically, allowing more space for those around him, including Konoplyanka,

The work put in by Seleznyov won’t trouble the statisticians, except on the occasions he produces a goal, but the immeasurable contributions of players like him are vital to a team’s success. They’re not as easy to spot and you won’t find a column in your Opta stats for hard work, which makes Seleznyov and those of his ilk, all the more valuable.