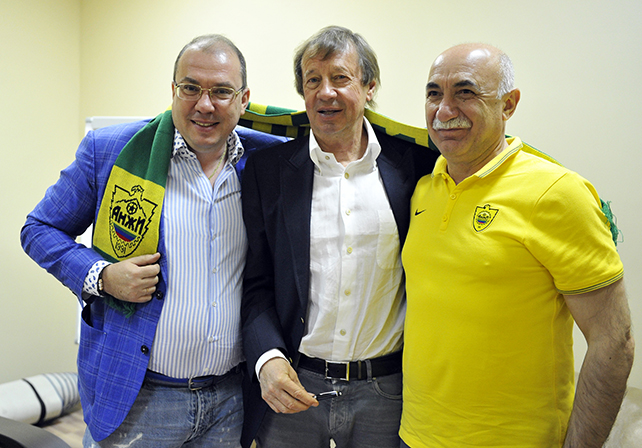 After winning the Ukrainian Premier League in 2009 Semin quit Dynamo and returned to Moscow to coach his beloved former club Lokomotiv. But he was never able to rekindle the sort of success that he had at the club from 1992 to 2005 when he won two Russian championships and four Russian cups, Subsequently he was fired by Lokomotiv in November 2010. A second spell at Dynamo Kyiv then beckoned, but he was not able to break Shakhtar Donetsk’s monopoly on the Ukrainian championship, and he left Dynamo after his contract ended in 2012.

After leaving Dynamo, Semin joined the Azerbaijani club Qəbələ Futbol Klubu, but once again was unable to win silverware, and his contract was terminated by mutual consent in the summer of 2014.

Upon returning to Russia, Semin redeemed himself by guiding lowly Mordovia Saransk to a respectable eighth-place finish in the Russian Premier League. On May 30, however, Semin, announced that he was going to leave Mordovia: “I am grateful to this time, this year, which I spent at Mordovia, it was very hard. We [the coaching staff] were united with the players, and we achieved our goals: which was to stay in the top flight. We even climbed to the middle [of the standings]. But life goes on.”

Less than three weeks later on June 18 Semin was announced as the new head coach of Anzhi Makhachkala. At Anzhi, Semin will be replacing coach Sergey Tashuyev whose contract was not renewed despite the fact that he guided Anzhi to a Russian First League championship that secured the club’s return to the Russian Premier League.

With Anzhi back in the Premier League, many expected that Anzhi’s flamboyant owner, the oligarch Suleyman Kerimov, would once again open his treasure chest and bring in a high profile coach from Western Europe. Instead, however, Kerimov decided on Semin, which indicates that Kerimov is holding to his promise of two years ago, that the club would focus on local talent rather than spend extravagantly on international stars as the club had done in the period between 2011 and 2013.

The involvement of the Armenian oligarch Oleg Mkrtchyan further reveals that Anzhi is now a club that is focused on developing raw talent rather than buying expensive stars. While working at Mordovia, Semin has proven that he can work well with a team that was assembled on a low budget.

At Anzhi Semin’s task will be to take a relatively young squad—the team’s current average age is 25.4 years—and to not only achieve a respectable finish in the Russian Premier League, but also to help the many prospects in the squad to reach the next step in their development as footballers.

This will not be an easy task, especially because Anzhi’s management is in charge of the team’s composition. As Semin explained to Sport-Express: “Anzhi’s front staff decides who stays and who goes, they have analysed the performance of the players and their prospects in the past season. This is the right situation. In this regard, I never interfere, and do not want to interfere. They have seen the players the whole year, which decided to leave. It is their decision. I was made aware of it when I came to the club. That’s all.”

As Anzhi continues to add young prospects to the squad, it will be interesting to see whether Semin proves to be the right coach for Anzhi’s latest approach, or if the success which Semin achieved at Mordovia last season was a one-hit wonder.