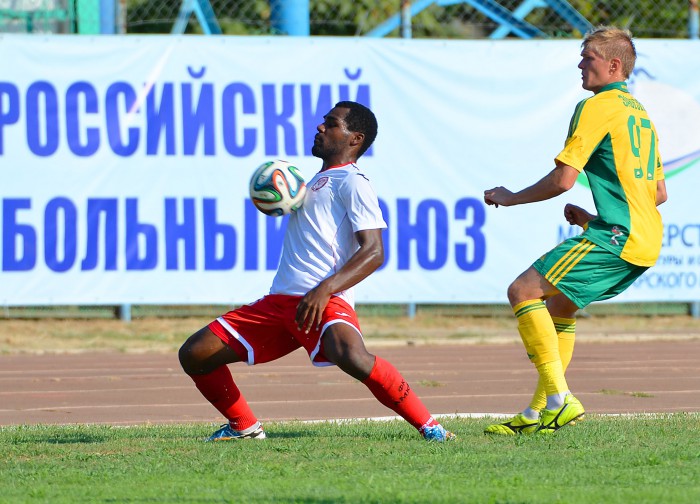 Brian Idowu had a dream to one day play for the first team of his boyhood club Zenit St. Petersburg. The defender, who was born in Russia, but is of Nigerian decent, has had his path to Zenit’s first team blocked because of the colour of his skin.

The Russian online portal Lenta.ru printed a quote by Idowu: “Playing for Zenit was always my goal. But as time passed, it didn’t go further than training with the youth team. Then it was hinted that with this colour of skin the path to the main team is blocked for me because of the fans who do not like black players.”

The 22-year-old defender also added that when he was 12 and working at a Zenit game as a ball boy he heard monkey chants from Zenit fans directed at him. The story first broke when Idowu gave an interview with the official homepage of his current club Amkar Perm.

Idowu further highlights the difficulties as a black person growing up in St. Petersburg. “In high school, I did not often think about those issues [racism]. But when I got older I learned about skinheads but I did not often come in contact with them. One day, though, in the Metro my friend spotted a group of them and shouted to me “Run!” My parents were always worried about this and I was not able to move around in the city [St. Petersburg] freely.”

The issue of racism within in St. Petersburg’s fan scene has been a well-covered story. In 2012 for example the Zenit fan group Landscrona published a manifesto demanding the club not sign any black or gay players. The club, however, responded to those demands three years ago by saying “we make our player selections without any limitation regarding origin, religion or skin colour”. Zenit did not comment on their policy in regards to players and their sexual orientation, but this is not surprising given Russia’s stance on LGBTQ rights.

The manifesto by Landscrona came in the wake of the club signing two black players – the Belgium midfielder Axel Witsel and the Brazilian striker Hulk. Both have now become established in the main squad, but recently Hulk had been the target of monkey chants at an away game against Torpedo Moscow.

As a report by FAREnet.org highlights, racism in Russian football has been endemic, with 99 incidents of racism reported in Russian football in 2014 alone. With the 2018 World Cup only three years away the Russian Football Union (RFS) has created a new office known as the Anti-Racism Inspector, which is supposed to find measures to combat racism in the country.

We will never know if Idowu was indeed talented enough to make it at Zenit, however the influence of Zenit’s fans and the politics of the clubs functionaries meant that Idowu never had a real chance to strap on his boots for his beloved hometown club, not because of his lack of ability, but because of the colour of his skin.