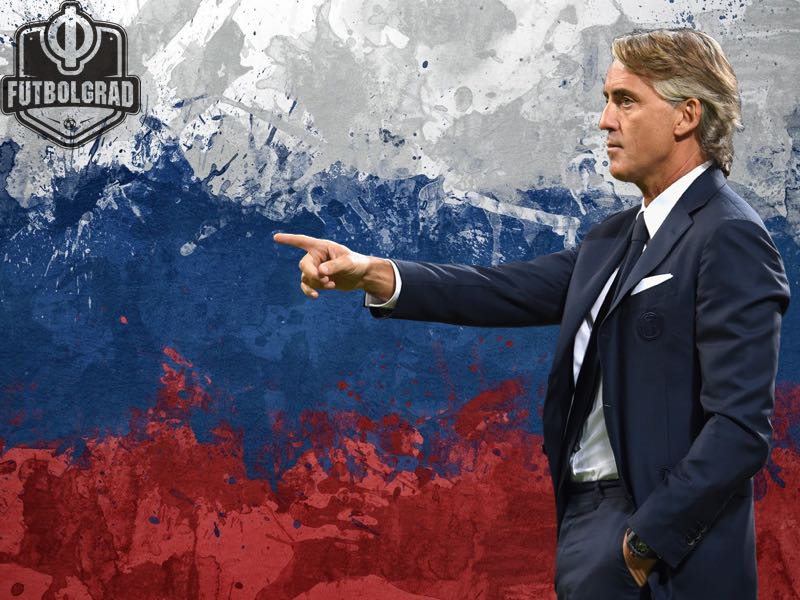 Zenit – Back to the Future With Roberto Mancini

While Russia are busy hosting the 2017 FIFA Confederations Cup Zenit Saint Petersburg, have been busy rebuilding their squad. Following the failure to reach the UEFA Champions League for the second season in a row Zenit once again decided to fire their head coach replacing Mircea Lucescu with the Italian star coach Roberto Mancini.

Signing Roberto Mancini is both a risky move and a statement of intent by Russia’s richest club. The Italian coach is known for being a great tactician, but he has also struggled at his previous assignments at Manchester City, Galatasaray and Inter Milan. A steadfast character Mancini will not shy away from conflict when it comes to running Zenit Saint Petersburg.

At the same time, the Mancini is a high profile coach, who can still attract star signings to his club. The latest examples are the transfers of Kostas Manolas and Leandro Paredes—reports have suggested that the pair will be signed by Zenit from Roma for a combined fee of €65 million. The Futbolgrad Network has learned that although at first reluctant Paredes has now decided to complete the move. Manolas, on the other hand, has several offers and at the time of writing had failed to appear for his medical that would have completed his move.

Apperantly Roma are selling Kostas Manolas and Leandro Paredes to Zenit for a combined fee of €65m.

Regardless the signings of Manolas and Paredes would be two biggest transfers for Zenit since the club signed Axel Witsel and Hulk back in 2012. Both signings would be a significant step up from the five previous signings Dmitry Poloz, Aleksandr Erokhin Christian Noboa, Denis Terentyev (all Rostov) and Daler Kuzayev (Akhmat Grozny).

But Parades and Manolas, should it happen, are part of an interesting puzzle. The transfers overall show that the Saint Petersburg club is trying to rectify constructional deficits created by the brief Mircea Lucescu era. The Lucescu era will always go down as a period in which Axel Witsel and Hulk were sold and replaced by rather mediocre talents such as Hernani and Robert Mak—good players but not superstars.

Zenit are in a post-Lucescu Perestroika

Zenit’s transfer window thus far indicates that Zenit’s attempt to make stars under a reputable coach like Lucescu, who had shown at Shakhtar Donetsk that he was able to form star players, has come to an end after just one season. In fact, Zenit being linked with high profile players from abroad is a new statement of intent by Russia’s richest club.

Dmitry Poloz, "Roberto Mancini was one of the most important factors in my transfer"
His first interview is here ➡️https://t.co/VXYJTm9980 pic.twitter.com/3otnCIH1mG

Roberto Mancini, of course, is the most important piece of the puzzle. Dmitry Poloz recently told Zenit’s club page that working with Mancini was one of his main reasons to move from Rostov to Saint Petersburg. The same was true Christian Noboa, who also was vocal about wanting to play for Mancini.

Zenit have always prided themselves on being able to sign high profile players from abroad and their strategy to hire foreign coaches was therefore elemental and was also the reason why they are always the favourite to win the league by places like BetOnline Sportsbook. Mancini’s reputation, for example, makes it also possible for Zenit to approach players like Manolas and Paredes. Hence, even if the Manolas deal should collapse, which looks likely at the moment, Zenit will probably stay active in the transfer market and attempt to sign another high-profile player in his stead.

Zenit Will Continue to Think Big

Is Zenit, therefore, going back to the future under Roberto Mancini? In a way yes. But what is perhaps a fascinating aspect of the transfer window is that Zenit have brought in four players from FC Rostov. Signing key players from a club that for the last two seasons has performed above their expectations indicates that Zenit have realised that the core group of players need to be players, who have already adapted their game to the Russian Football Premier League.

Hence, while big name signings will be substantial for Mancini’s project, it will be the Russian core group signed from Rostov that will give Zenit the necessary power base to dethrone Spartak Moscow next season and win the Russian Football Premier League and return to the UEFA Champions League. Zenit at times seemed somewhat detached from actual Russian Football Premier League football over the last two years. This is likely going to change now.