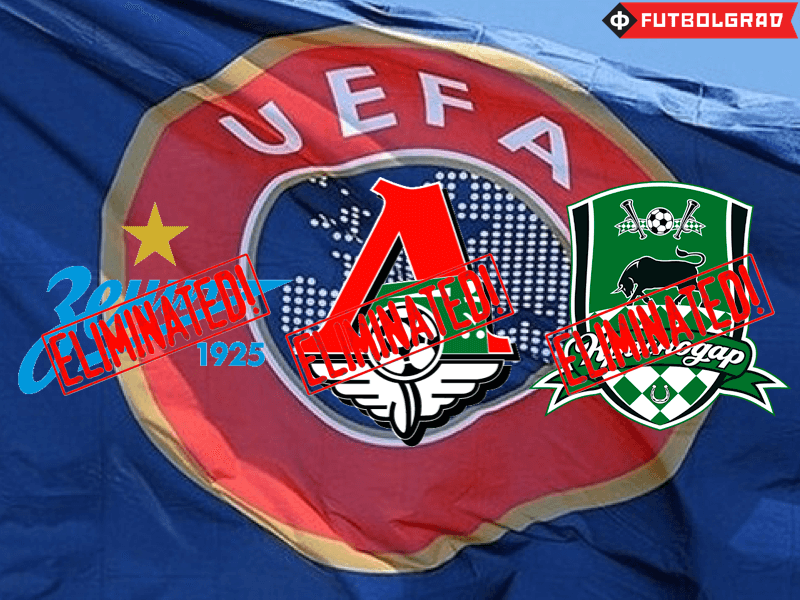 It was a magnificent strike from 30 meters out by Benfica’s Mexican striker Raúl Jiménez in the 85th minute of the round of 16 match between Zenit Saint Petersburg and Benfica Lisbon, but Zenit’s keeper Yuri Lodygin managed a magnificent save. Yet Zenit’s defence had been to slow to react as Benfica’s attacking midfielder Nicolás Gaitán pounced on the ball, and converted the rebound to make it 1-1.

It was the deathblow to Zenit’s hopes to make it to the quarterfinal in the UEFA Champions League as the Russian’s would have had to score two goals to win the match 3-1, as they lost the first leg 1-0 to Benfica on February 16 in Lisbon. With the score 1-1 so near to the end, the body language of most Zenit players reflected this blow. Indeed Gaitán would add another goal in the 95th minute to make 2-1 for Benfica completing the misery for the Russians. 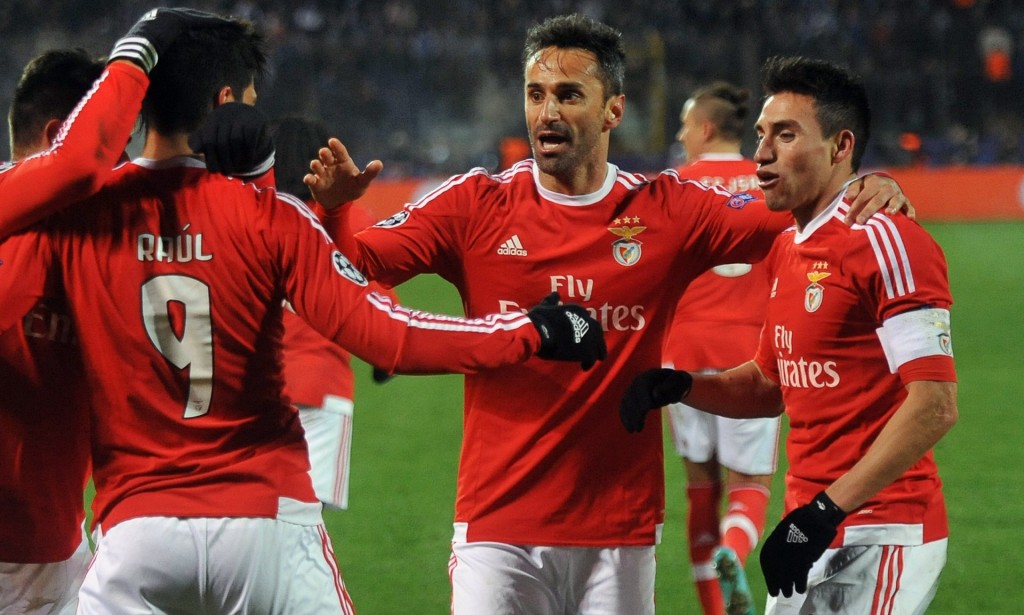 Benfica players are celebrating the tying goal – Image via Guardian

It is a disappointing result especially given the fact that Zenit seemed to be the better of the two teams, and managed to equalize Benfica’s first leg result in the 70th minute. Yuri Zhirkov took the ball in midfield and pushed himself through on the left wing and into the box where he floated a magnificent cross to his Brazilian teammate Hulk, who scored with his head. The stalemate seemed to be broken, and the path to a first quarterfinal qualification for Zenit appeared on the horizon.

Then in the 80th minute Artyom Dzyuba magnificently stepped past five Benfica defenders, but was unable to beat Benfica keeper Ederson. The moment encompassed everything about the Russian striker—who according to his own words models himself after the Swedish striker Zlatan Ibrahimović—as Dzyuba often shows glimpses that he could be one of Europe’s best, only to lack the necessary final punch to rise to that level.

The fleeting moment of glory was gone for Dzyuba, and five minutes later Benfica scored to make it 1-1, shattering Zenit’s dream of reaching the quarterfinal of the Champions League which would have been the first time in the club’s history.

Hulk would later lament “We had the opportunities, we just had to use them better. At this stage there are only two matches. When you don’t score goals, you pay for it. We could not do it. We had a dream to go on, but failed to implement it. We had three obvious goal scoring opportunities, but missed them.”

Instead, Zenit dropping out of the Champions League is the final chapter in the Russian disaster at the European competition, as both Lokomotiv Moscow and Kuban Krasnodar were already eliminated in the round of 32 of the Europa League.

Matters were even made worse by the fact that all three Russian clubs faced teams that should have been beatable under normal circumstances. While Lokomotiv Moscow vs Fenerbahçe was believed to be an even matchup that could have gone either way, both Zenit and FC Krasnodar, who faced the Czech club Sparta Praha, were believed to be favourites in their respective ties.

Before the knockout stages there was hope that Russia could overtake either or both France and Portugal in order to move to either sixth or fifth in the UEFA 5-year-coefficient standings, which would have meant an extra starter for the Russian Football Premier League in the 2017-18 season. The results in the group stage have been good for Russian clubs, and as it stands now Russia will move from the seventh position to the sixth position after this season, which will put them in a prime position to gain an extra starter in the Champions League in the 2017-18 season.

Yet failure in the knockout stages will hurt Russia, as both France and Portugal have teams remaining in Europe. This means that Russia will not be able to overtake fifth placed France, and sixth placed Portugal still has Sporting Braga and Benfica Lisbon in European competitions, which are likely to collect enough points for Portugal this season to fight of seventh placed Russia—giving them a good chance to retain their third Champions League starter in 2017-18.

This will be a major disappointment for football authorities in Russia, who were hoping that the country could soon field three clubs in the UEFA Champions League. One thing is for certain – the disappointing results in Europe will bring back calls to reform the Russian Football Premier League, as the league must address the disadvantage caused by the fact that clubs have a much longer winter break than other clubs in Europe.

Zenit’s first match against Benfica for example was their first competitive fixture since December 9. They then played in the Russian Cup, where Zenit beat Kuban Krasnodar 2-1 on February 28, before their first league game on March 5 against FC Krasnodar, which ended in a 0-0 tie.

Russian Clubs Have a Disadvantage Due to the Winter Break

Speaking to R-Sport, Zenit coach André Villas-Boas criticized UEFA for how the matches against Benfica were scheduled: “The sixth game of the group stage of the Champions League had to be held on the road, because UEFA didn’t think that the conditions in Russia were good enough to play. But then in the round of 16 there are two slots, and we could have played one week from now. But while they rearranged the group match because of the bad weather they did not rearrange this match, and for me UEFA showed inconsistency with their decisions.”

Hence, Zenit feel that UEFA could have done more to address the disadvantage, by scheduling Zenit for the second set of round 16 playoff games, which took place on February 23-24, rather than the first set, which was played on February 16-17. 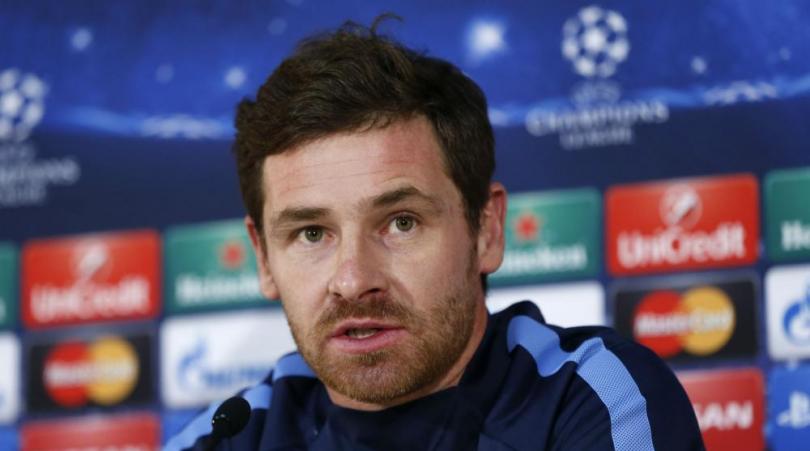 Yet UEFA is not really to blame for this problem, as Zenit still would have faced Benfica in Lisbon without prior match practise even if UEFA had allotted them a later slot. Hence, it will be up to the Russian Football Union to address this issue. Futbolgrad’s Saul Pope has suggested that Russian club’s should participate in a Russian Winter Football Premier League in order to keep up match sharpness, and to be better prepared for the first rounds of European football in the spring.

As Saul Pope outlines, such a competition could be played in the indoor complexes in Moscow, Saint Petersburg, and Yekaterinburg. Alternatively the tournament could be held in the Caucasus, Israel or a Southern European country—clubs may prefer playing abroad rather than indoors as they could play on natural grass. Either way Russian football must come up with a way to address the disadvantage of the long winter break if it wants its clubs to be more competitive in European football.