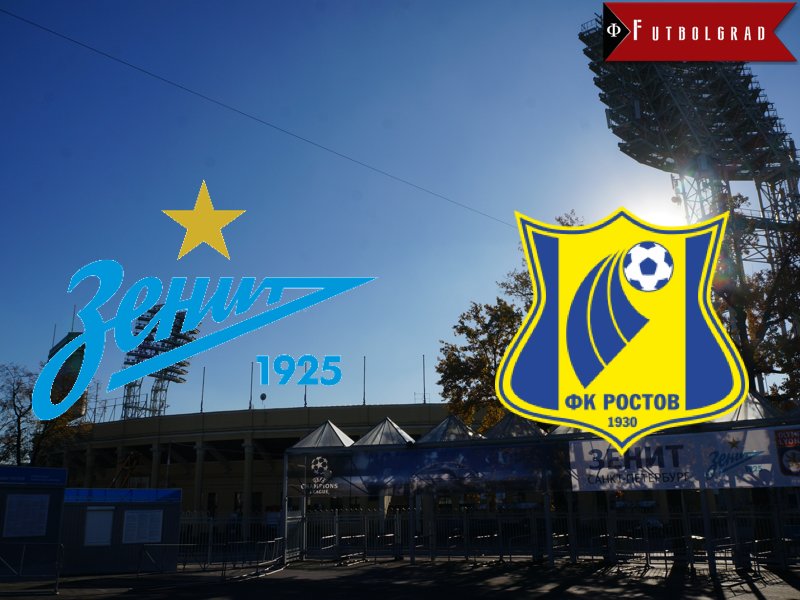 Zenit vs FC Rostov – Match of the Week Preview

Zenit are currently in rebuild mode after having failed to qualify for this year’s edition of the UEFA Champions League after not achieving a top two finish last season. As a result the club hired the experienced Mircea Lucescu, who had 12 successful years in Ukraine with Shakhtar Donetsk, to lead the club back to a top position.

Yet Lucescu had to start the season without the Brazilian superstar Hulk, who was sold to Shanghai SIPG for €50 million, and furthermore without Champions League football it has been difficult for Zenit to attract star players to Saint Petersburg.

Hence, Zenit only managed to sign the Slovakian left winger Róbert Mak, and the Brazilian right winger Giuliano. The Russians were also expected to announce the signing of the Paraguayan midfielder Miguel Almirón this week. But while Almirón has announced his intentions that he would like to sign for Zenit, an official announcement that he will move to Russia has not yet been made.

Yet Lucescu’s project in Saint Petersburg has so far illustrated that there is need for further re-enforcements, especially upfront, as Zenit only managed two 0:0 draws in their first two matches against Lokomotiv Moscow, and FC Ufa. The results certainly don’t match the ambitions of Zenit’s owner Gazprom.

Therefore, anything but a victory against Rostov on Sunday would result in the club to go into full crisis mode, and could truly jeopardize Lucescu’s long term future. But Zenit’s problems are dwarfed by what is currently happening at their opponent FC Rostov.

On paper Rostov had a decent start to the season, as the club managed a 1:0 victory against newly promoted Orenburg on day one of the RFPL, and a 0:0 draw against Ural Yekaterinburg. Furthermore, Rostov also reached the playoffs of the UEFA Champions League by eliminating RSC Anderlecht 4:2 on aggregate (2:2 in Rostov and 0:2 in Anderlecht).

Hence, on August 3 Rostov appeared just one step away from reaching the Champions League group stage. But then on August 7 Kurban Berdyev announced his resignation as the manager of the club.

According to Sport-Express Berdyev told his players that he made his decision because of Rostov’s mounting debts, and the club’s inability to pay wages on time. Yet Champions League football would have likely eliminated Rostov’s more immediate financial problems, hence it is understood that Berdyev’s resignation is the result of Spartak Moscow firing their manager Dmitry Alenichev on August 7.

Hence, Rostov’s caretaker manager Dmitri Kirichenko now has the thankless task of keeping the club together. But Kirichenko has worked as Berdyev’s assistant manager last season, and the club’s front office is confident that Kirichenko can manage the club for now. Given the fact that Berdyev was no longer confident that Rostov could overcome its financial problems, Kirichenko now faces a mission impossible, which begins on Friday against Russia’s biggest club.

Hence, anything but a Zenit victory will be a massive surprise, on the other hand Rostov’s squad has managed impossible results against all odds before, and it would not be beyond the club from the Don to pull off a surprise result. Futbolgrad’s tip therefore is a low-scoring tie.