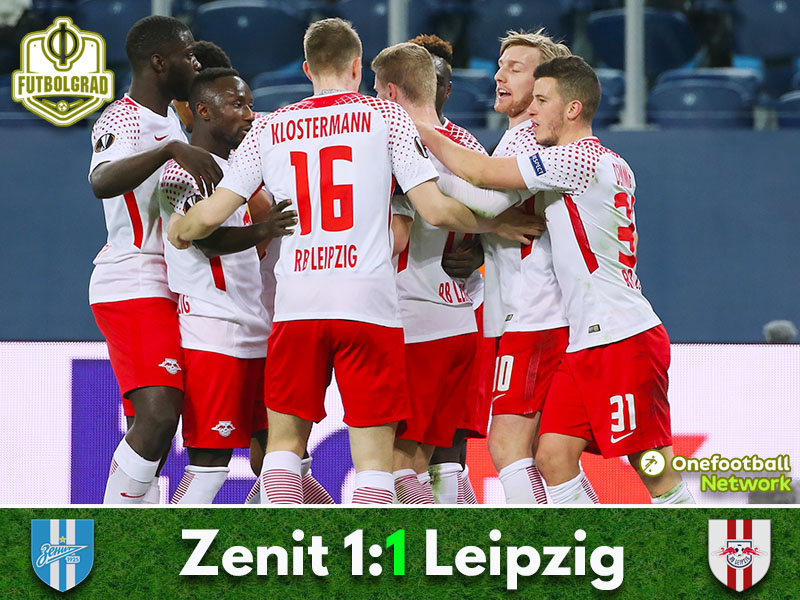 Zenit vs Leipzig ended with the Russian side exiting the competition despite a dramatic late challenge and a missed Timo Werner penalty.

The match started with a major blow for Zenit with leading goalscorer Aleksandr Kokorin having to go off with an injury after a collision with Leipzig defender Willi Orban. Anton Zabolotnyi was brought on to replace his Russian national teammate. Perhaps it was Kokorin’s injury, but Zenit seemed to almost go flat following the injury.

Leipzig quickly began to dominate the game and in the 22nd minute took the lead after a wonderful pass from Timo Werner Augustin found himself free inside the box and despite having his back to the goal managed a quick turn and a low shot that beat Zenit keeper Andrey Lunev. Three minutes later Zenit almost equalised. Orban had brought down Zabolotnyi just outside the box and, much to the relieve of Leipzig keeper Peter Gulacsi, Leandro Paredes curled the ensuing freekick against the crossbar.

Leipzig had the majority of the play, but at times appeared to be sloppy in their buildup play. One of those mistakes almost led to the equaliser with Yuri Zhirkov winning the ball in Leipzig’s half and storming forward into the box where his cross found Zabolotnyi, whose acrobatic side-volley ended up in Gulacsi’s arms. In the 45th minute, the ball fell perfectly for Emiliano Rigoni outside the box, and the Argentine struck the ball nicely, and Gulacsi had to stretch to bend the arching ball over the crossbar. Then with moments to go Zenit had the equaliser Domenico Criscito send a perfect cross into the box where it found Sebastian Driussi inside the six-yard box and the Argentine scored with a flying volley.

The second half kicked off with both sides playing wide open football to find the second goal. As a result, possession switched back and forward with teams finding to unravel each other in a tight midfield battle for the first 15 minutes of the second half.

With neither side finding an advantage and with Leipzig holding a narrow lead the game went somewhat flat with the Germans trying to kill the game off. With the clock ticking Zenit took control of the match, but while pressing the Russians could not find a way through a well organised Leipzig defence.

With ten minutes to go Leipzig finally started to free themselves from Zenit’s grip – creating dangerous situations the moment of the two-legged tie seemed to arrive in the 82nd minute when Timo Werner was brought down inside the box. The German international stepped up himself, but Lunev made the stop to keep Zenit alive. As a result, we got a dramatic finale with Zenit pushing to get the goal that would equal the scoreline. Leipzig, therefore, had the space to counter and Bruma almost scored a late winner for Leipzig on a breakaway Lunev, however, came across to make a glorious stop. It did not matter, however, as shortly after the final whistle blew with the Bundesliga side going through.

Zenit vs Leipzig – Man of the Match: Bernardo #3

Bernardo was the Futbolgrad Network man of the match. The Brazilian left-back was the calming factor in defence for RB Leipzig and especially in the second half where the teenagers Ibrahima Konaté and Dayot Upamecano were holding the centre of the park was influential with his experience. Often drifting into the centre to fill holes Bernardo was crucial in keeping Zenit’s attack at bay by winning 13 out of his 15 duels, making 13 clearances and four interceptions. 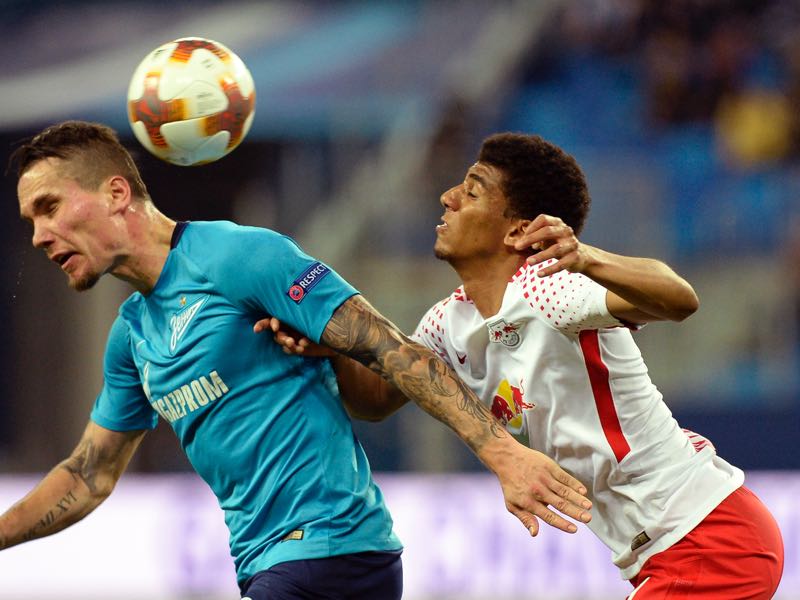 Zenit vs Leipzig – Bernardo (r.) was the man of the match. (OLGA MALTSEVA/AFP/Getty Images)

After dropping out of the Russian Cup and falling out of the Champions League spots in the Russian Football Premier League Roberto Mancini placed great emphasis on the Europa League. With Zenit now also exiting this competition the Italian head coach could now see the pressure build against him as Zenit have only won one match since the winter break – the 3-0 victory against Celtic.