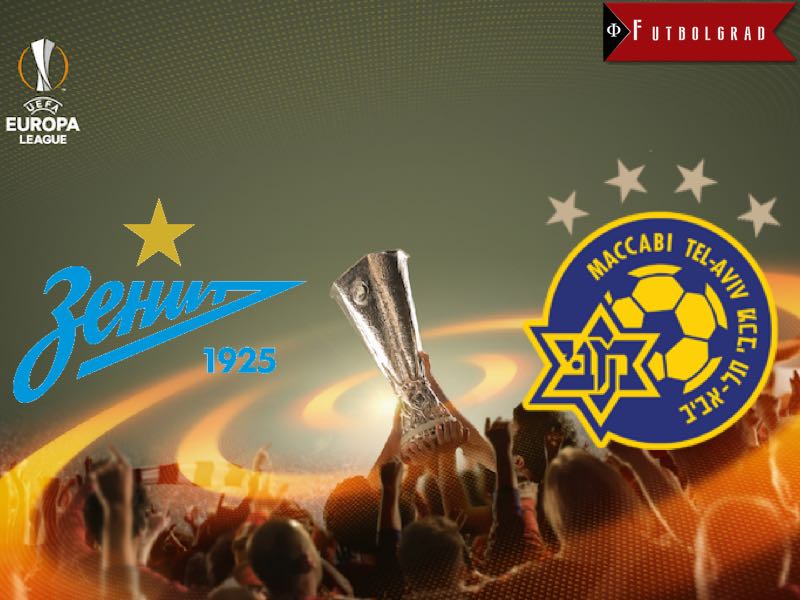 Zenit Saint Petersburg were never threatened by Maccabi Tel-Aviv on matchday 5 of the Europa League, as they secure their fifth victory in as many games.

With Zenit having already qualified for the round of 32 Mircea Lucescu chose to juggle his line-up a bit starting the highly talented Serbian forward Luka Djordjević up front. The tactical changes to the squad were the most fascinating aspects of the game early on, as both teams struggled to establish a flow to the game. Both sides picked up the pace halfway trough the interval with Zenit having the real first chance of the game when Giuliano won the ball in the box, and spotted Róbert Mak the Slovakian’s shot curled over Pedrag Rajković’s goal, however. Then just before halftime Kokorin, who got on the end of a wonderful low cross by Mak, opened the scoring for Zenit Saint Petersburg.

Both coaches made chances in halftime with Lucescu bringing on Artem Dzyuba, and Shota Arveladze introducing Yossi Benayoun, and Sagiv Yehezkel. Arveladze’s changes almost paid off when Yehezkel almost tied the game in the opening moments of the second interval with a low drive. Shortly after Yehezkel set up Benayoun in the box, but Zenit’s defence was able to collectively block the shot. Maccabi kept up the pressure in an attempt to collect a valuable point, and with five minutes to go Nosa Igiebor almost equalized the score with a header that just missed the net. Instead it was Zenit, who would score next, as Aleksandr Kerzhakov scored a thundering free kick in the final moments of the game.

Aleksandr Kokorin scored his fourth goal in his fourth appearance in the Europa League this season. The 25-year-old continues to revive his career under head coach Mircea Lucescu.

This might have been the last European match in the old Petrovsky Stadium, as it is expected that the much delayed Zenit Arena will be finished over the winter break. In that case Zenit have given the 91-year-old Petrovsky Stadium a wonderful send off.