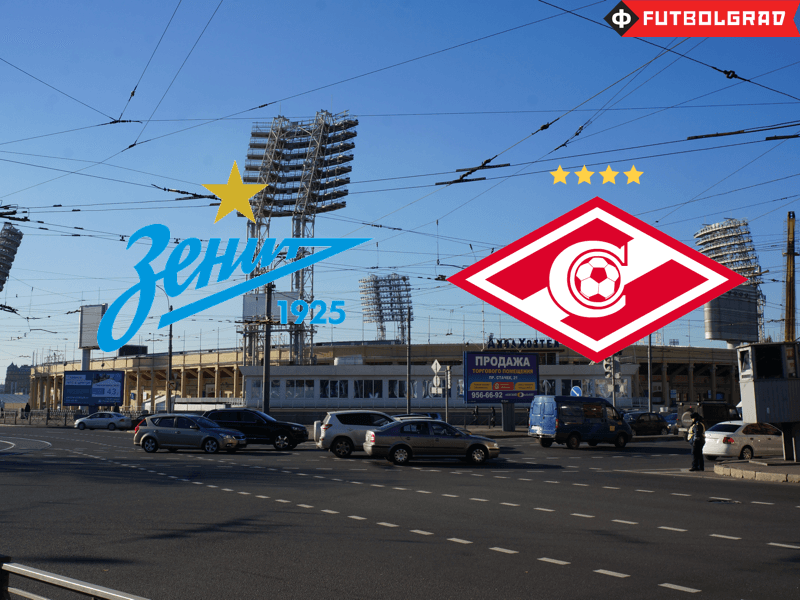 It is super Saturday in the Russian Football Premier League (RFPL) this weekend. In Moscow fourth-placed Lokomotiv Moscow will entertain city rivals, and league leaders CSKA (read about the match here). In Saint Petersburg third-placed Zenit are host to seventh-placed Spartak Moscow.

Zenit vs Spartak Moscow represents the most prestigious match between Russia’s most important cities. Despite lacking major success in the last decade, Spartak are by most accounts the most popular club in the Russian capital.

Zenit meanwhile are not only the only club of Russia’s old capital Saint Petersburg playing in the RFPL, but in recent years have also become one of Russia’s most successful clubs—since 2007 Zenit have won four league titles—and thanks to Gazprom they are also the country’s richest.

Despite the rivalry between Moscow and Saint Petersburg, the game also has major importance in the league standings. Zenit have 43 points at the moment, just three points less than league leaders CSKA Moscow, who are facing a difficult derby against Lokomotiv. Hence, the game on Saturday against Spartak represents a big chance for Zenit to go level on points with CSKA—although a victory by second-placed Rostov against Kuban Krasnodar would see Rostov on top of the table.

Meanwhile Spartak are under threat of missing out of a European spot once again. There was hope at the beginning of the season that under the leadership of new coach and club legend Dmitriy Alenichev, Spartak could return to the top of the RFPL.

The match will also see the league’s most exciting players pitted against one another—Spartak’s Dutchman Quincy Promes and Zenit’s Brazilian Hulk. Promes currently leads the league in scoring with 13 goals, but is tightly followed by Hulk, with 12 goals to his name. But while it is anticipated that Hulk will remain with Zenit despite several offers from China, Promes could very well leave Spartak at the end of the season, as several top European clubs are tracking his progress.

Despite Promes’ good form, Spartak have been very inconsistent this season, and are now likely to miss out on qualifying for international football once again. As a result there has been once again talk about a coaching change at Spartak Moscow.

Hence, for Alenichev it will be of the utmost importance to get a positive result on Saturday against Zenit, as Spartak currently has just 37 points, and with only seven games remaining is five points behind fourth-placed Lokomotiv Moscow—in Russia first and second placed teams go to the Champions League, and third and fourth placed team qualify for the Europa League.

This makes the encounter a must-win for both teams, as Zenit and Spartak both need three points in order to have a chance to reach their season targets.

But despite the importance of the match and the exciting prospect of seeing two of the leagues most exciting players of the league facing each other, one of the major stories has been about the costs of the tickets for Spartak fans.

Zenit, which hosts the match, demands between 1800 and 2400 roubles ($27 to $36) from Spartak supporters, who are travelling with their team. Spartak has protested these prices as unfair, especially since Spartak only demanded 1000 roubles ($15) from Zenit fans that travelled to Moscow in the fall.

The ticket prices set by Zenit have since become a major media debate with officials from both clubs weighing in. This, however, has meant that much of the media attention has shifted away from what should be an exciting game between two major rivals.

The last encounter between the two teams ended in a 2-2 draw, but Zenit’s recent run of form, and the fact that they will be playing at home make them a favourite to win the game on Saturday.