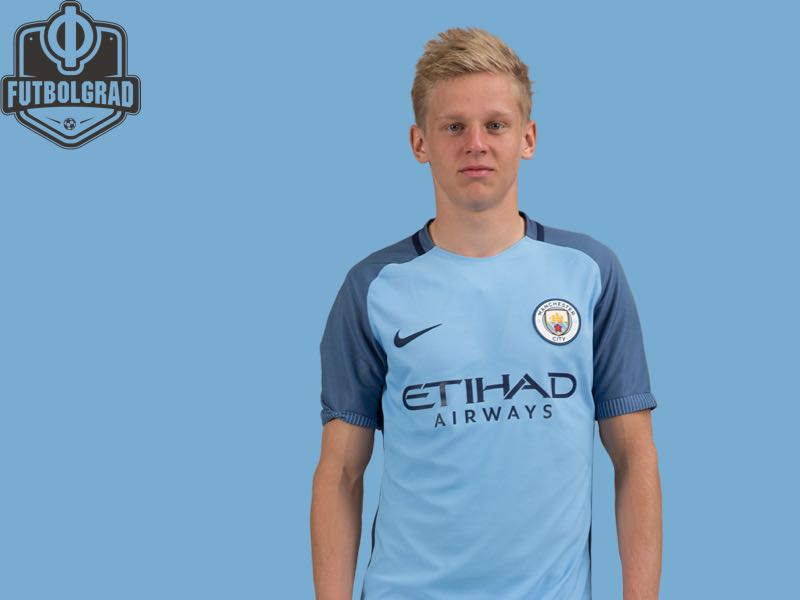 Last summer marked a new chapter in English club Manchester City’s history. The appointment of Josep “Pep” Guardiola as the club’s new manager, the changing of the club crest, and several new signings further accelerated excitement in Manchester. One of these new signings under Guardiola was Oleksandr Zinchenko, a young Ukrainian footballer from Radomyshl, and it seemed the youngster would further his career at the English club.

Zinchenko’s youth career was highlighted by his five-year tenure at Shakhtar Donetsk, one of Ukraine’s most decorated clubs, before moving to Russian club FC Ufa. During his time in Russia Zinchenko made 26 appearances and scored twice, thus drawing a lot of attention to his style of play both domestically and abroad. His time at Ufa caught the attention of former Ukrainian Manager Mykhaylo Fomenko, where he was selected into Ukraine’s senior squad for the Euro 2016 competition.

While Ukraine failed to earn a single point or score in any of their group stage fixtures, Zinchenko featured in all three matches, and he impressed his international audience. Reports in Europe claimed that German club Borussia Dortmund was the front runner in signing the youngster until Manchester City swooped in and purchased the Ukrainian for £1.7 million. With the appointment of Guardiola as the new City manager, and with Zinchenko’s versatile play (various midfield positions as well as left back), it seemed as if the Ukrainian’s move to the English Premier League would lead to new and better things.

Zinchenko was not Able to Impress at PSV Eindhoven

Fate, however, dictated otherwise. Following the acquisition of the Ukrainian, City Manager Guardiola sent Zinchenko on loan to Dutch club PSV Eindhoven so that he could gain further experience. Unfortunately, the loan did not work in Zinchenko’s favour. While he made 15 appearances throughout the 2016-17 season, Zinchenko stated that he was not happy with his loan to the Dutch club and that he felt unwanted. Moreover, due to his unsuccessful loan spell, Zinchenko was recently omitted from Ukraine’s squad list when it faced Finland this past June for a 2018 FIFA World Cup qualification match. 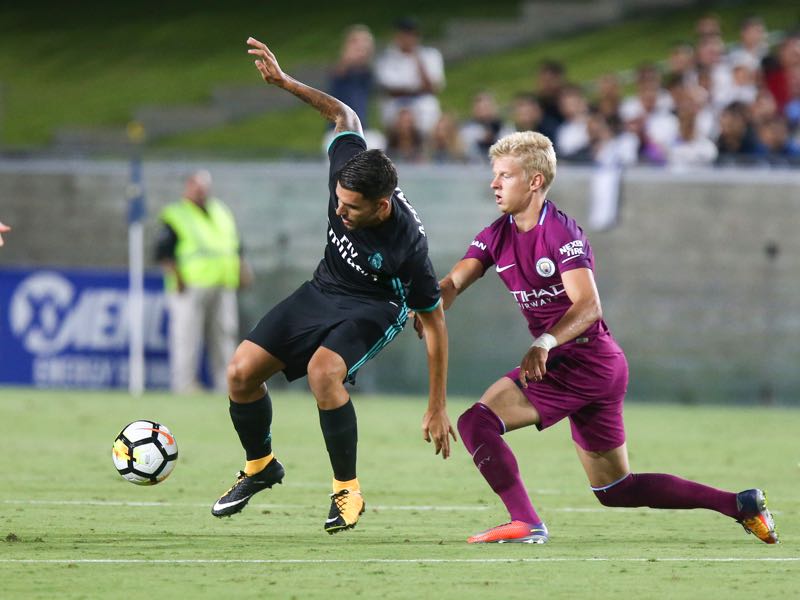 Meanwhile, Manchester City also had its series of struggles during the 2016-17 season. The Premier League got the better of Guardiola. Unlike La Liga and the Bundesliga, where Guardiola was a star, the English Premier League was not as kind. The Catalonian failed to address Manchester City’s defensive woes from the previous two seasons. These weaknesses were exposed throughout the season, most notably in the league matches against Chelsea and Leicester City, Arsenal during the FA Cup semi-final, and Monaco during the return leg in the Champions League Round of Sixteen. Due to a series of poor performances, Guardiola found himself empty-handed and trophy-less in his first year as City’s manager.

With these struggles in mind, what has changed over this past year? What is expected from both the Ukrainian and Manchester City during the 2017-18 season?

Following the 2016-17 season, Manchester City has been active during the 2017 summer transfer window. The English club released eight players while others chose to be sold to other leagues. These summer transfers should be encouraging for Zinchenko, as midfielders such as Nolito, Enes Unal, Aaron Mooy, and Fernando were sold. These changes indicate that competition for a senior midfield position has slightly decreased. Moreover, it is known that the club is still attempting to offload or loan Fabian Delph, Samir Nasri, and Patrick Roberts, thus providing further encouragement for a senior debut. Also, several youngsters have been sent on loan for the 2017-18 season, thus limiting the competition at the youth level.

Zinchenko’s relationship with the club is also positive. For example, following the preseason matches against Manchester United, Real Madrid, and West Ham United, Manager Guardiola praised the Ukrainian. Zinchenko has also formed a strong relationship with former Shakhtar Donetsk player Fernandinho and has a strong bond with Raheem Sterling. Finally, given his versatile playing ability, Zinchenko could be used as a back-up in midfield for the ageing Yaya Touré and Fernandinho, while also replacing Danilo at left back. Given these points, it seems that this season seems more promising for Zinchenko should he remain once the transfer window closes.

Zinchenko – A Second Chance in Italy?

It should be noted, however, that there may be some complications. For example, Manchester bred Phil Foden, and Spaniard Brahim Diaz both impressed during the preseason, and they are likely to compete with Zinchenko for a first team appearance. The purchase of Bernardo Silva and the reported interest in Kylian Mbappe, Alexis Sanchez, and Sergio Busquets would also hinder the Ukrainian’s first team action. Finally, if Manchester City is unable to sell or loan Delph, Nasri, and Roberts, it is likely that the Ukrainian will lose out to these more experienced players.

There is some hope, however. According to Italian reports, Napoli is interested in acquiring Zinchenko for a season-long loan, with an option to buy at the end of the 2017-18 season for €6 million. Moreover, it is reported that the loan move will be completed at the end of August following Napoli’s Champions League qualification matches against Nice on the 16 and 22 of August. 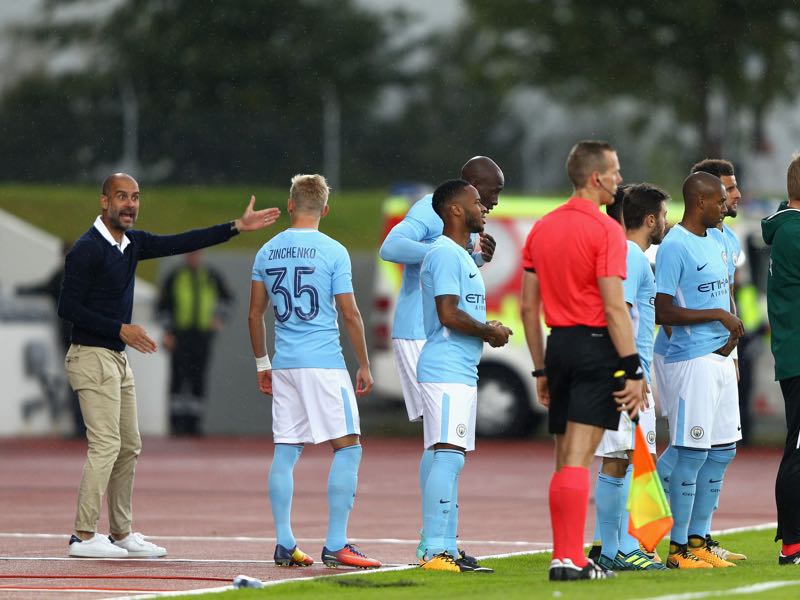 During the preseason preparations Pep Guardiola did not always seem convinced about Zinchenko’s abilities. (Photo by Ian Walton/Getty Images)

This would be a good move for the Ukrainian, as Napoli as recently featured in European competitions against elite clubs. Also, Napoli finished third in Serie A and have also had an active summer transfer window, thus indicating that they will make a title push during the 2017-18 season. Given these points, if Zinchenko features regularly, it is expected that he will gain further experience, much to the satisfaction of Guardiola. Should Zinchenko impress at Napoli, it is likely Manchester City will retain the Ukrainian, in which he would feature in the 2018-19 season. On the other hand, if Zinchenko fails to impress, much like his unfortunate spell at PSV Eindhoven, it is possible that Manchester would sell him to Napoli or another suitable buyer next summer.

Overall, Zinchenko has faced some difficulty over the past year regarding first team action, and it is possible that a second unpleasant year may follow. On the one hand, if Zinchenko impresses at Napoli or another location, it is likely he will become a first team regular in Manchester during the 2018-19 season. On the other hand, if he fails to impress on his second loan spell, or if he fails to break into first team action at Manchester City, it is likely he will be offloaded during the summer 2018 transfer window.

Regardless of the outcome, the Ukrainian’s story highlights the intensive demands of football for young players in the new Premier League era. Unfortunately, football can sometimes be a cruel game.