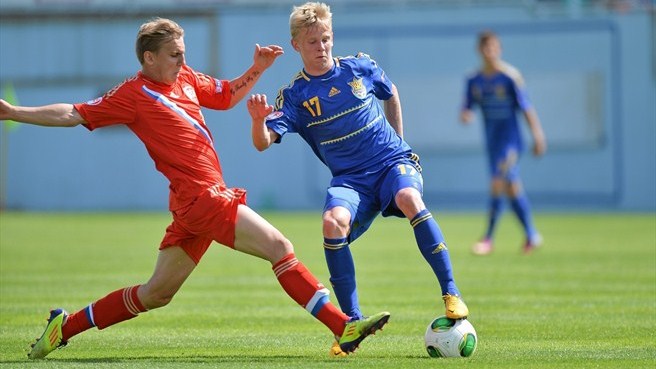 Zinchenko – The Latest Object in the War between Dynamo and Shakhtar

In the lead up to the Ukrainian Derby on Friday, it wasn’t the match itself that was dominating the headlines, but rather the latest scandal in Ukrainian football surrounding eighteen-year old midfielder Oleksandr Zinchenko.

Zinchenko had received an unexpected call up for the national team’s crucial Euro 2016 qualifier against Spain as a replacement for the disqualified Serhiy Sydorchuk, and made his debut for the zbirna as a late substitute in the closing minutes of the match. Zinchenko, who is a product of the Shakhtar youth academy, but currently plays for Russian Football Premier League (RFPL) side FC Ufa, became the third youngest player to play for Ukraine, behind the two legends Andriy Shevchenko and Serhiy Rebrov.

The substitution was immediately controversial. Manager Mykhaylo Fomenko was criticized heavily for sending on such an inexperienced player when Ukraine was down 1-0 in a match that they desperately needed to win in order to automatically qualify. Serhiy Palkin, the general director of Shakhtar, immediately went on the offensive. He told football.ua that Zinchenko’s debut was “carried out by one well-known club that is supposedly interested in him.” Palkin believes that by Dynamo handing Zinchenko his debut in the national team, would also automatically be in the drivers seat to sign the young talent from Ufa.

Palkin’s attack on Dynamo was prompted by rumors that Zinchenko was being pressured to accept Russian citizenship and play for the Russian national team by FC Ufa, as the club would otherwise struggle with the new foreign limitation rules (6+5) that have been established in Russia this season. According to Palkin, Dynamo, who are reportedly interested in acquiring the highly-rated midfielder, put pressure on the Football Federation of Ukraine (FFU) and on Fomenko to include him in the squad and hand him his first cap. By appearing for Ukraine in a competitive fixture, there is now no risk that Zinchenko could play for another country, and therefore count as a foreigner for any Ukrainian team.

This is significant because of the foreigner limit imposed on teams in both the Ukrainian and Russian leagues. Now that Zinchenko is a confirmed Ukrainian international he would count against the limit for Russian clubs, but not for Ukrainian ones, making it likely that he would soon return to play in the Ukrainian Premier League (UPL) rather than staying in Russia.

The controversy is further compounded by the circumstances of Zinchenko’s departure from Shakhtar. If one believes Palkin’s version of events, Zinchenko unilaterally tore up his contract with Shakhtar, and his former club is now suing both the player himself and his current club. Palkin is convinced that Zinchenko will soon be disqualified by FIFA for breaking his contract at Shakhtar.

As for Fomenko, when asked if he was forced to put Zinchenko on, he told matchday.ua “Yes, the situation forced me to, why should I not include a football player in the national team for whom other national teams are also contending?”

Fomenko’s comments confirmed that the FFU was wary of losing Zinchenko to Russia, but this still does not explain Palkin’s theory of Dynamo’s involvement. The player has said that he considers himself Ukrainian and that playing for Russia was never an option. Yet if Dynamo was actively trying to buy the winger, he would now not count against the foreign limitation rule in the Ukrainian Premier League, which would further explain Palkin’s suspicions of Dynamo’s involvement, as the current contract dispute between Zinchenko and Shakhtar means that Dynamo would be the only likely destination for Zinchenko in the UPL.

Dynamo had stayed quiet over the entire affair until  Saturday, when club president Ihor Surkis categorically denied any interest in Zinchenko. However, the saga, which is a reflection of the never-ending war between Shakhtar and Dynamo over any conceivable issue, is probably far from over.