Zorya Luhansk has been one of the biggest surprise packages of the season. The club, which is currently playing in exile due to the conflict in the Donbass, is currently competing for a Champions League spot.

Prior to the start of the 2016-17 Ukrainian Premier League campaign, the common viewpoint among supporters and specialists was that the main story of the season would revolve around race for the title between the country’s top two clubs. How would Shakhtar adjust to the post-Lucsescu era under their new Portuguese manager Paulo Fonseca? Could Dynamo manager Serhiy Rebrov cope without trusted assistant Raul Riancho? And most importantly, Could Shakhtar unseat two-time defending champion Dynamo Kyiv and reclaim the title?

These questions have all been conclusively answered. Shakhtar’s transition to life without their long-serving Romanian coach has been rather smooth, the failures in Europe notwithstanding. Rebrov has struggled and is likely entering the last months of his tenure at Dynamo. Finally, the league was decided even before the winter break.

Shakhtar’s lead at the top of the table is insurmountable. They are now 16 points clear of second place Dynamo. Not since the 1999-2000 season has the competition been so one-sided. That season Dynamo finished 18 points ahead of Shakhtar, who were still a few years away from breaking the hegemony of the capital club.

The gap between Dynamo and third place Zorya Luhansk, however, stands at just six points. With the new format of the Ukrainian Premier League, the two clubs will still face each other twice, one home fixture for each club.

Of course, “home” for Zorya is anything but. Most of the international media attention has focused on Shakhtar’s plight, but Zorya Luhansk are likewise from the conflict-ridden Donbass region and are now well into their second year of exile, playing their home matches in Zaporizhia, over 300 kilometers away. 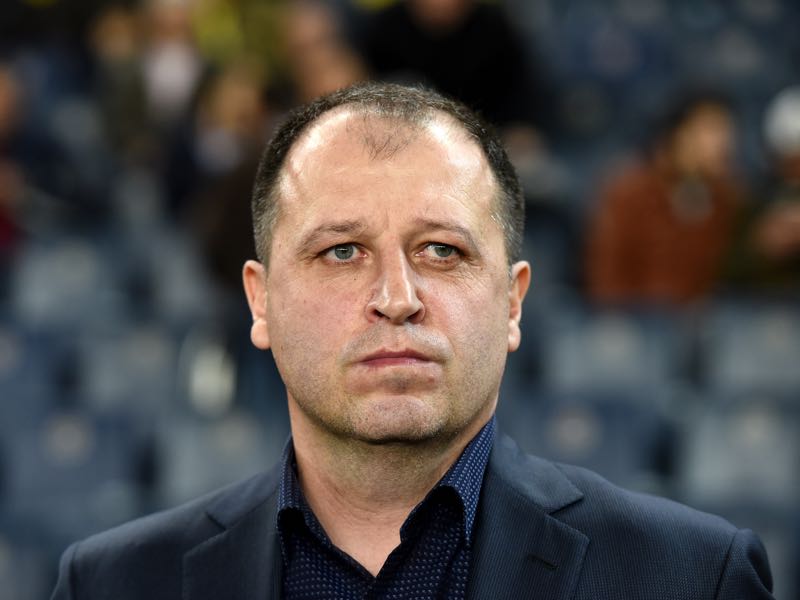 Yury Vernydub has been the father of Zorya Luhansk’s success. (OZAN KOSE/AFP/Getty Images)

Despite these difficult circumstance, manager Yury Vernydub’s side continue to impress. А seventh place finish in 2013-14 – their best ever result in the independent Ukrainian league – was followed with two successive fourth place finishes. This season they took part in the group stage of the Europa League for the first time, albeit their automatic qualification was a direct result of 3rd place Dnipro’s European ban.

This year Zorya are in third, four points clear of fourth place Oleksandriya. But the club are looking up rather than down the table. Zorya have been no lower than third since matchday 3 and have spent several weeks ahead of Dynamo in second.

Zorya still has two opportunities to narrow the gap

Zorya missed a golden opportunity to gain ground on Dynamo in the first match following the winter break, letting go of an early lead to lose 2-1. Nevertheless, given Dynamo’s woes, many at the club are confident that they can challenge for the silver medal. General director Serhiy Rafailov has stated that the club’s aim is not third place, but as high a position as possible. Following their 2-1 defeat to Shakhtar at the weekend, midfielder Dmytro Hrechyskhin said that “everything could still change” in the fight for second.

Curiously, Hrechyskin was not allowed to play in that match, as he is on loan from Shakhtar to Zorya. Nor were four other loaned out players. Zorya are a club of modest financial resources and to an extent rely on loanees from Shakhtar, with whom they have a close relationship.

Over the transfer window Zorya have also been strengthened with the arrival of Vladyslav Kalitvintsev, who also arrived on loan, but from Dynamo. As a result he is unlikely to take part in the critical fixtures between Zorya and Shakhtar. Nevertheless, the gap is narrow enough to make these two matches the most consequential in the championship round.

The Champions League is still a dream for Zorya, and an unlikely one. But it’s certainly a more intriguing storyline to follow than the nonexistent title race.