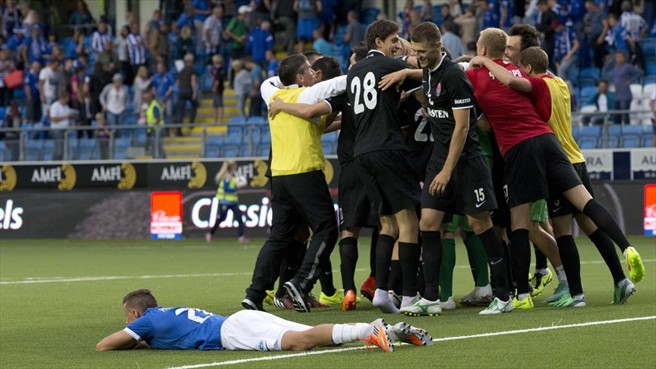 Zorya Luhansk – From Exile To Europe

On April 27, 2014 Zorya Luhansk hosted Hoverla Uzhhorod in the 27th round of the Ukrainian Premier League. A late goal from Ruslan Malinovskyi secured a crucial victory for the home side at Luhansk’s Avanhard Stadium and made sure they remained in the chase for European football.

On the same day, following weeks of unrest, pro-Russian activists proclaimed the Luhansk People’s Republic. Within weeks, a fraudulent referendum was held and Russian-backed separatists declared independence from Ukraine. Soon after, tensions between the separatists and the Ukrainian government escalated into a full-blown military conflict.

As of today, Zorya’s victory over Hoverla was the last match they played at their home ground. And yet, despite their prolonged exile, Zorya have since had their best ever season and now stand on the brink of the group stage of the Europa League.

Two weeks after the match against Hoverla, the Football Federation of Ukraine banned any matches from taking place in the Odessa, Kharkiv, Donetsk, and Luhansk regions. Zorya’s next scheduled home fixture against Shakhtar instead took place in Cherkasy, a city over 650 kilometers to the west in the central part of the country.

Shortly after the end of the season, the club’s general director Serhiy Rafailov explained the current situation in which the club found itself:

“Will the Luhansk supporter see Zorya at Avanhard stadium during the new championship? The championship is big and lasts a year. In time the Luhansk supporter will see Zorya at Avanhard, but until the normalization of the situation in Luhansk the team, alas, will not play here. Today we are searching for a place where our team will be received and when this matter is resolved, everyone will know.”

The club has been exiled from the Avanhard Stadium

Finding a new stadium was not the only challenge facing the club. Rafailov revealed that the war in Eastern Ukraine was a cause for concern for certain players.

Brazilian striker Danilo, for example, opted to leave the club as a result of the ongoing conflict. When asked the reason for his departure to Russian side Kuban Krasnodar on loan, he replied, “the main reason was the war… it’s difficult to live when such things are happening in the city: killings, shootings in the streets, it’s not possible to go anywhere at night. My family did not want to return to Luhansk.”

Ivorian striker Yannick Boli also did not rejoin the squad in the summer and was sold to Anzhi Makhachkala, and Bosnian defender Toni Šunjić also left the club.

Zorya had just had their best ever season in the Ukrainian Premier League, finishing seventh, but now things were looking grim.

Because of Metalurh Donetsk’s expulsion from UEFA competitions due to a breach of FFP regulations, Zorya’s seventh place finish was enough to qualify for Europe for the first time in the history of an independent Ukraine and the second time overall – they had taken part in the 1973-74 European Cup after unexpectedly winning the 1972 Soviet Top League.

Rafailov announced that the club’s European matches would take place at the Lobanovskyi Stadium in Kyiv, while for the league campaign, the team would relocate to the city of Zaporizhia. Meanwhile, the Avanhard stadium in Luhansk was seriously damaged by shelling. 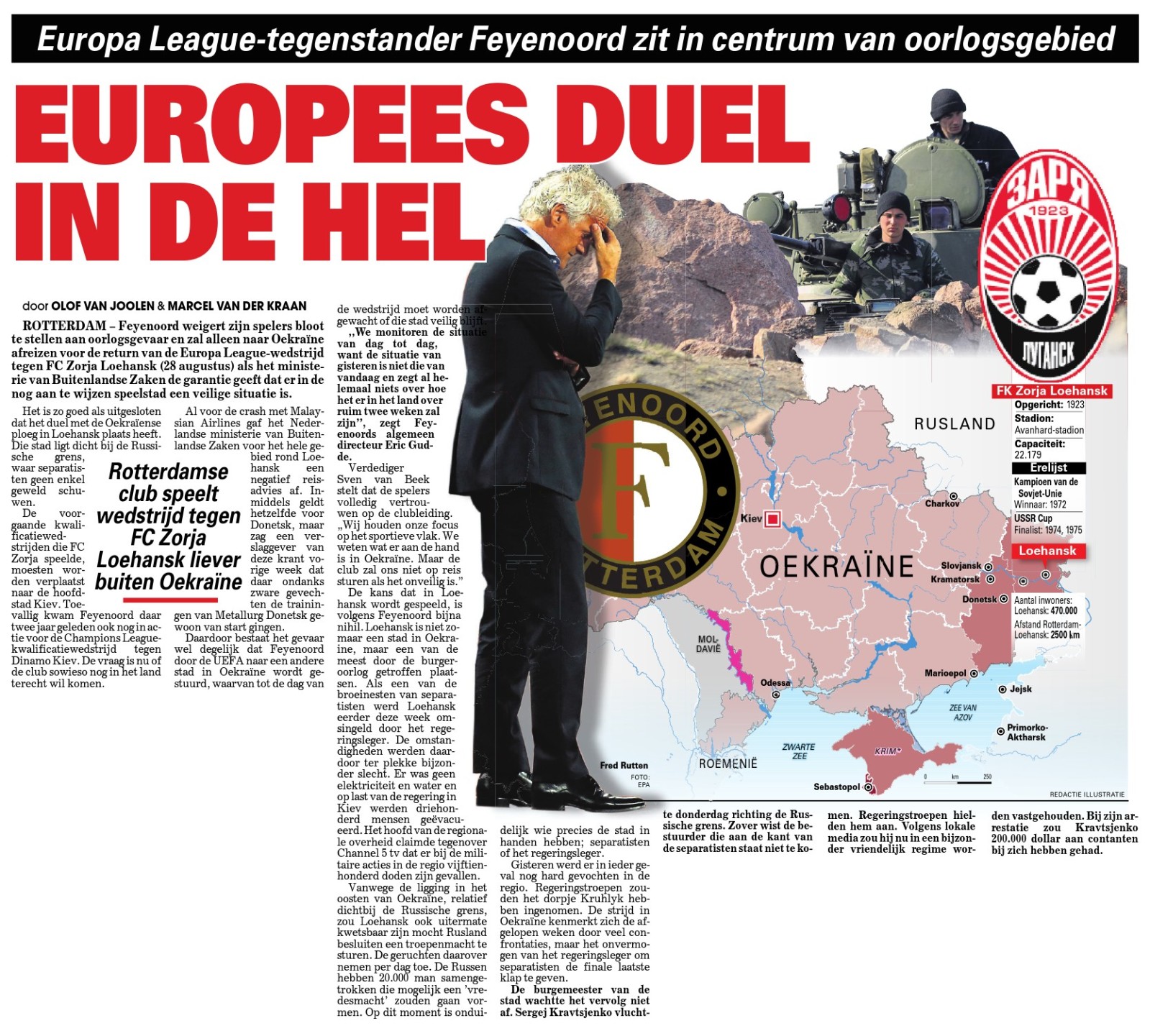 Zorya entered the Europa league in the 2nd qualifying round and easily dispatched Albanian side KF Laçi 5-1 on aggregate, then narrowly defeated Norwegian club Molde 3-2 thanks to a late own goal from the Molde center back.

In the next round, Zorya drew Dutch giants Feyenoord. After a 1-1 draw in Kyiv, they fell behind 3-0 in the Netherlands, which seemed to spell the end of their European campaign. But after a stunning comeback, Zorya leveled the score at 3-3, which would have been enough to send them through on away goals—only for Feyenoord to find a winner in stoppage time.

After the match Zorya manager Yuriy Vernydub told the television program Profutbol “after we gave up that goal I saw actual men’s tears from Ruslan Malinovskyi, Sasha Karavayev, Maksym Belov. Everyone was crying. And they were crying like men.”

Despite the agonizing Europa League defeat and the club’s prolonged exile, Zorya managed to improve on their seventh place finish of the previous season.

After an awful start to their domestic campaign when they won just one of their first five matches, in the sixth round they took points from Dynamo Kyiv, drawing 2-2 with the eventual league champions.

But it was in the next round of matches that Zorya truly made their statement of intent. For the first time in their history, Zorya defeated Shakhtar, who were the 5-time defending champions.

After the match Vernydub said: “This is the football we have been striving for. The guys worked hard, and this is the result. I’m very happy that my team demonstrated high-quality, entertaining, and intelligent football.”

Zorya kept up their form for the remainder of the season. Two rounds later they climbed to fourth in the table and, except for a two week period in late November, stayed there until the end. For the second year in a row, Zorya qualified for European football.

How is it that Zorya, during the most difficult time in their history, are having their most successful period? A lot of the credit must be given to their manager. Vernydub has been with the club since 2009, first as an assistant to Anatoliy Chantsev. In November 2011, with the club struggling in the relegation zone, Vernydub took over as caretaker and saved them from the drop. The next year they finished a respectable 10th, then continued their ascent to 7th and now 4th.

Despite the exodus of foreigners following the outbreak of war, Vernydub has managed to find adequate replacements and retain a measure of stability. He is also tactically versatile—while his side used to rely on long balls and set pieces, this season he has placed more of an emphasis on possession football.

The club also benefits from its close relationship with Shakhtar. Many of Zorya’s key players, including Ruslan Malinovskyi, Pylp Budkivskyi, and Oleksandr Karavayev, are on-loan from Shakhtar. Their desire to prove themselves in order to earn a spot in Shakhtar’s squad helps Zorya’s immediate objectives, if not their long-term goals.

The relationship with Shakhtar does not come without its drawbacks. In Zorya’s second fixture against Shakhtar last season, Shakhtar manager Mirceau Lucescu did not allow Zorya to use their on-loan players. In addition, rumors that Zorya’s star midfielder Ruslan Malinovskyi could be recalled by Shakhtar as a result of the Fred doping case show how an over-reliance on loaned-out players can be precarious.

At the Brink of Europe 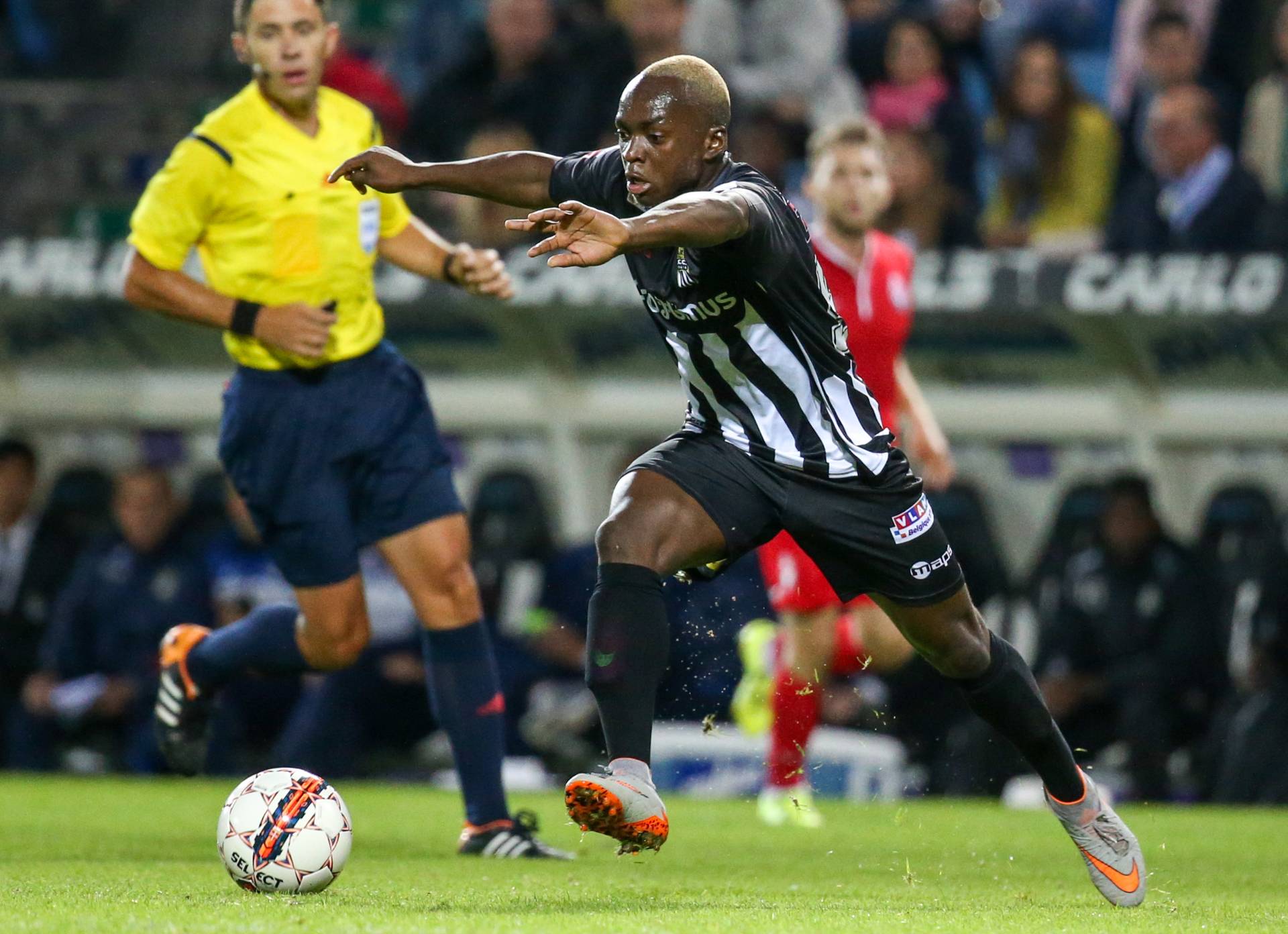 Chaleroi was just a stepping stone for Luhansk this season

Nevertheless, at the moment Malinovskyi looks to be staying at the club. He scored three goals in Zorya’s 5-0 aggregate victory over Belgian side Charleroi in the third qualifying round of the Europa League. They will now face Legia Warsaw, who finished second in the Polish Ekstraklasa last season, in the playoff round. This is the final hurdle before the group stages of the Europa league.

Zorya are in excellent form—they are joint second in the league after five matches and dominated Charleroi over two legs. The young players are hungry to prove themselves, and most of the squad remember the heartbreak of the loss to Feyenoord last season and will use this as motivation.

For an exiled club that has not played in front of their own fans in over a year and are not likely to return to their home ground in the near future, Europa League qualification would be an incredible achievement. Zorya, whose name means dawn in Ukrainian, are truly one of the few bright spots in Ukrainian football.