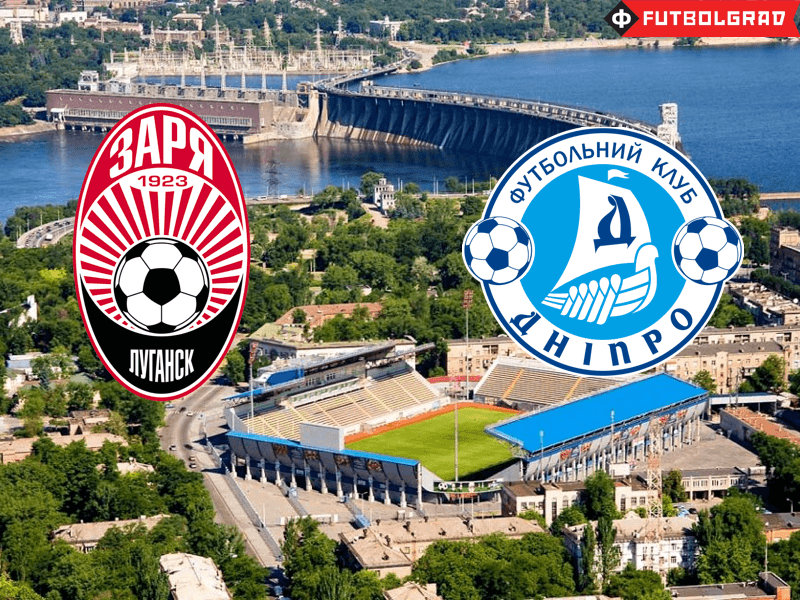 This week, Futbolgrad’s match of the week takes us to Ukraine for Zorya Luhansk vs Dnipro Dnipropetrovsk (Sunday 19:30 Ukraine time). Due to the conflict in the Donbass, the match will be played in Zaporizhya’s Slavutych Arena. In fact, Zorya playing in Zaporizhya has meant that, despite the fact that Metalurh Zaporizhya was expelled from the Ukrainian Premier League earlier this year, the city has continued to enjoy top class football.

Zorya Luhansk vs Dnipro Dnipropetrovsk – Who is Number Three?

Indeed, what a season it has been, as Zorya Luhansk has now established itself as the number three club in the Ukrainian Premier League behind Dynamo Kyiv and Shakhtar Donetsk. In fact, Zorya has already qualified for next season’s Europa League competition. 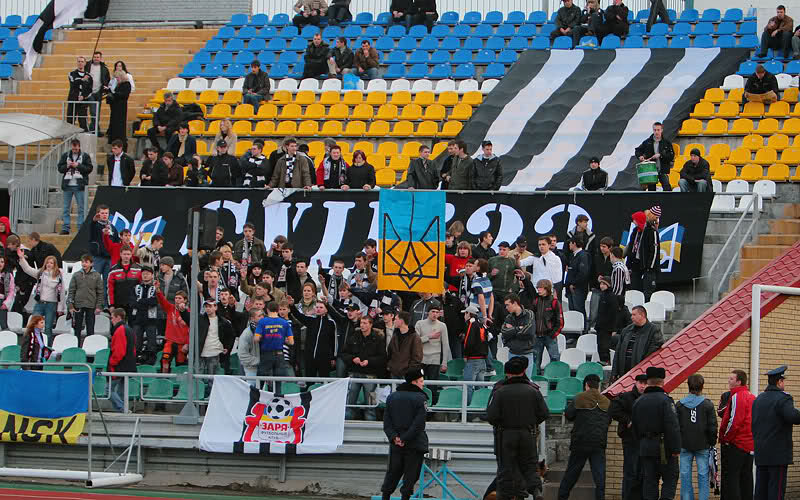 Zorya Luhansk had much to celebrate this season

This good fortune, however, has come thanks to the shoddy finances of the club that they will face on Sunday, as fourth placed Dnipro Dnipropetrovsk have recently been banned by UEFA from participating in European competitions because they have breached Financial Fair Play regulations.

The teams that finish third, fourth, and fifth in the Ukrainian Premier League qualify for the Europa League, but with fourth placed Dnipro out of the competition already, and with six matches remaining, and a 19 point gap to seventh placed Karpaty Lviv, Zorya have already qualified for the Europa League third round qualifiers for next season.

Technically Zorya could still qualify for a UEFA Champions League spot, but it is unlikely that either Shakhtar or Dynamo will drop enough points for Zorya to move into the top two in the table. Regardless, Zorya will attempt to do their bit to finish third in the league in order to firmly establish themselves as Ukraine’s third club.

Dnipro are heard by Financial Problems

Dnipro previously held this position—in fact, just a few years ago, Dnipro was seen as a potential challenger for both Dynamo and Shakhtar. But the departure of several key players last summer, including Ukraine’s national team player Yevhen Konoplyanka to FC Sevilla, as well as the above mentioned financial troubles, has meant that Dnipro is no longer within range of the big two in Ukraine, and in fact is now threatened to be past by Zorya. 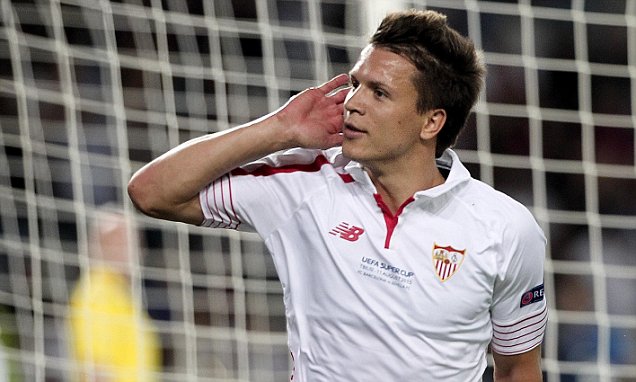 Yevhen Konoplyanka is among the players that have left Dnipro since last summer – Image via dailymail.co.uk

Despite the fact that Dnipro will not be allowed to qualify for the Europa League next season, players at the club have been adamant that they will try, at least, to gain a third place finish this season—or bronze place as it is called in Ukriane.

Artem Fedetskyi has echoed the sentiment that he and his teammates have set third place as their objective, even though it will not lead to a spot in the Europa League ths season. Eleven Dnipro players will have their contracts expire at the end of the season, however, and cynics might point out that while players might not be motivated by the potential for European football, they will, in fact, be playing for new contracts at Dnipro or elsewhere.

This sentiment is echoed by Roman Bezus who told Matchday that despite the dire outlook, he believes that, “all the players will finish the season, and after that something will be decided.” There are also rumours that owner, Ihor Kolomoyskyi, could sell the club at the end of the season and that the club is, therefore, in the shop window at the moment.

Zorya, meanwhile, has another set of problems, as the team has very little prospect of returning to Luhansk any time soon. Qualification for the Europa League would bring questions of where Zorya would play during its European campaign. Last season, Zorya reached the Europa League playoff stage where Poland’s Legia Warsaw eliminated them. Back then, Zorya had to play their European ties in Kyiv, a prospect that again seems likely for next season.

Furthermore, the club will also face the prospect of losing several of its key players. Zorya are understood to be a farm team for Shakhtar Donetsk, and currently have four players on loan from Shakhtar: goalkeeper Mykyta Shevchenko, midfielders Oleksandr Karavayev (23), and Ivan Petryak (22), as well as striker Pylyp Budkivskyi (24) were loaned from Shakhtar to Zorya before the season started, and Petryak was purchased by Shakhtar in the winter but will remain with Luhansk until the end of the season.

Petryak will almost a certainly to move to Shakhtar at the end of the season, and every positive result for Zorya makes it likely that Shakhtar will want to have the other players in their squad for the coming season as well.

Much of it will, of course, depend on who will coach Shakhtar next season, as rumours about Mircea Lucescu leaving in the summer have continued unabated. Zorya Luhansk coach, Yuriy Vernydub, has done an excellent job at forming a young and exciting team that is not afraid to attack—a philosophy that would fit well with Shakhtar—and there have been persistent rumours that Vernydub could become the new coach at Shakhtar if Lucescu chooses to not renew his contract at Shakhtar at the end of the season.

For now, however, the focus will be on Sunday’s match where Zorya will be the favourites to beat Dnipro and further cement their spot as Ukraine’s number three club.