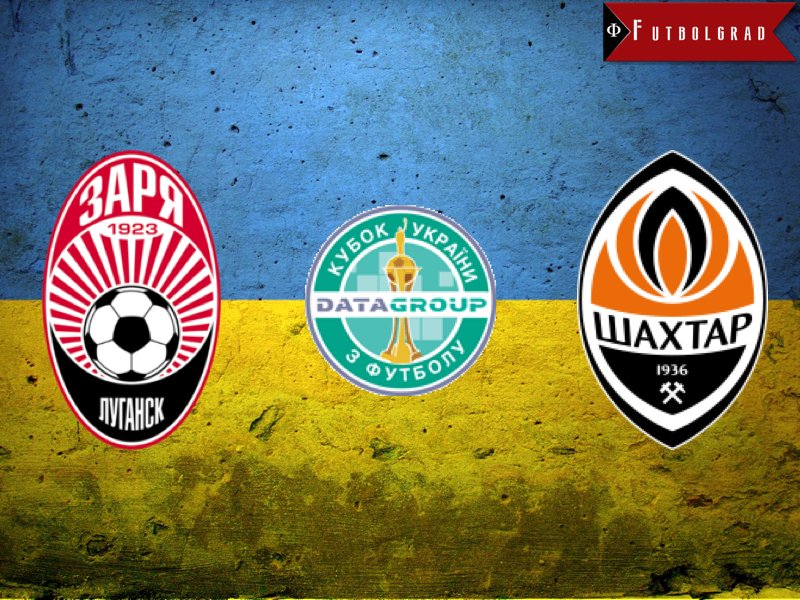 Road to the Final

This is the first appearance in a Ukrainian Cup final for Zorya, whose only top level trophy in their history is a suprising Soviet Vysshaya Liga title from 1972, back when they were known as Zorya Voroshilovgrad.

Since their forced displacement Zorya have relocated to the Slavutych-Arena in Zaporizhya, where they are now the only top flight side following the bankruptcy of Metalurh Zaporizhya. Despite these difficult circumstances the past two seasons have been the most successful in Zorya’s history since Ukraine gained independence.

Zorya have finished fourth in the past two seasons, behind the big three of Dynamo Kyiv, Dnipro Dnipropetrovsk, and Shakhtar Donetsk, and were on the verge of qualifying for the Europa League group stages last season. Because of Dnipro’s European ban, Zorya’s fourth place finish is enough for an automatic berth in the group stages for next season.

This year’s fourth place finish actually comes as a disappointment, however. At the winter break Zorya were comfortably in third place, six points ahead of Dnipro who was in fourth position. The loss of both Roman Malinovskyi and Andriy Pylyavksyi in the winter transfer window and a poor run of form in the second half of the season saw Zorya drop back down to fourth, seven points below Dnipro. Nevertheless, the fact that Zorya can be displeased with this end to the league campaign is a testament to their progress under manager Yuri Vernydyub.

On their way to the cup final Zorya defeated lower league sides Krystal Kherson and Helios Kharkiv in the round of 32 and round of 16, respectively, before easily dispatching Volyn Lutsk 6-1 on aggregate in the quarterfinals. In the semifinals Zorya managed to overturn a 1-0 first leg deficit against favorites Dnipro with a 2-0 home victory that was decided by a 95th minute free kick by Andriy Totovitskiy. 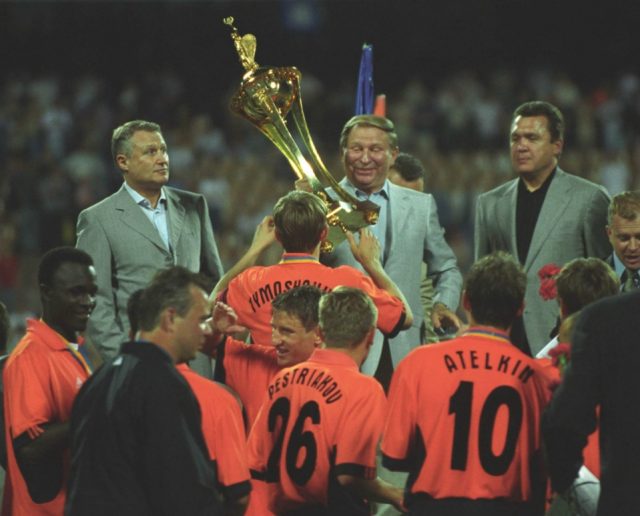 For Shakhtar the Ukrainian Cup final is familiar territory – Image via wikimedia.org

For Shakhtar, this is familiar territory. This is their 16th appearance in the final of the competition, which they have won on nine occasions. Last season a penalty shootout defeat against Dynamo denied them their only chance at silverware.

This season Shakhtar have finished second best to their hated rivals Dynamo for the second year running, but considering their circumstances and the fact that they defeated Dynamo 3-0 in both league fixtures, the league campaign can hardly be considered disastrous.

In the Europa League, Shakhtar made a run into the semifinals, where competition specialists, and eventual winners, Sevilla, eliminated them. This leaves the cup as their last chance to win a trophy this season, and they are the firm favorite.

Their path to the final has been relatively straightforward. A 3-0 victory over Arsenal Kyiv in the round of 32 was followed by a 9-0 aggregate victory over FC Ternopil and 5-2 aggregate victory over Vorskla Poltava. It was upstarts FC Oleksandriya who offered the most resistance in the semifinals, but in the end Shakhtar ran out 3-1 victors to set up a date with Zorya.

Final in Lviv – A Controversial Choice

On April 29, over two weeks before the conclusion of the semifinals, the Football Federation of Ukraine announced that the cup final would be held in Lviv for the first time.

The decision was heavily criticized by Shakhtar general director Serhiy Palkin, who told Terrikon: “There was no meeting, the vote was held by fax. There was no discussion about why Lviv was chosen. The fans need to understand why this decision was taken. Today 250 tickets have been sold. This might be the most disastrous cup final in the history of Ukrainian football.”

Palkin’s complaints stem from the fact that Lviv already hosts the Premier League matches of both Karpaty and Shakhtar, and is geographically distant from both Donetsk and Luhansk. While many supporters of both of these sides have also been internally displaced, most have remained close to home and will not have an easy time traveling to the final. 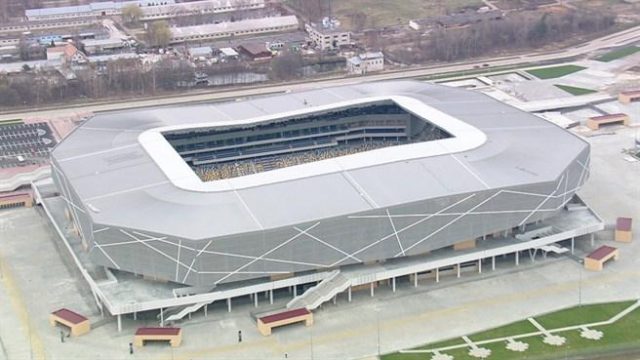 Kharkiv, Palkin’s preferred choice, is set to lose its only Premier League side and its geographical position in Eastern Ukraine makes it far more geographically accessible for supporters of the two finalists.

Roman Volynets, the general director of the marketing branch of the FFU, has announced that he expects the stadium in Lviv to be at least two-thirds full and may even sell out. “The finalists are slightly surprising, but I do not think this will affect the attendance,” Volynets said in an interview with the television channel Futbol 1. “If it does, the effect will be insignificant, but interest in the match will not decrease.”

A quick glance at the Zorya team sheet reveals the close relationship between the two finalists. Currently eight players on Zorya’s squad are loaned from Shakhtar, and many of them are key players in Vernydub’s side. Four of the Shakhtar-owned players started in Zorya’s decisive semifinal victory over Dnipro, and two more came off the bench. Totovitskiy, the stoppage time hero, is one of them.

Another Zorya player whose rights belong to Shakhtar is the highly rated 22-year old winger Ivan Petryak. Petryak was highly sought after by both Dynamo and Shakhtar in the winter transfer window, but Zorya’s close ties with Shakhtar ensured that there was only realistic destination for the young star. Shakhtar acquired Petryak in February but let him remain on loan at Zorya until the end of the season.

The large Shakhtar contingent at Zorya has been a source of contention in the past. In October of 2014 Zorya defeated Shakhtar 1-0, a costly defeat in a close league title race. In that match Shakhtar allowed all of their players at Zorya to take part, but in the reverse fixture in April Shakhtar manager Mircea Lucescu decided against allowing the loaned out players to face their parent club. Shakhtar easily won the match 4-1.

In October of 2015 history repeated itself—Shakhtar banned its Zorya players from taking part in their fixture against Shakhtar and registers an easy victory. This time, the deficit was even more decisive: 7-1, by far Zorya’s worst defeat of the campaign.

This practice is hardly unique in Ukrainian football—Dynamo has established what is effectively a farm team at Hoverla Uzhhorod and have banned their own players on loan at Chornomorets from taking part in matches in the past. 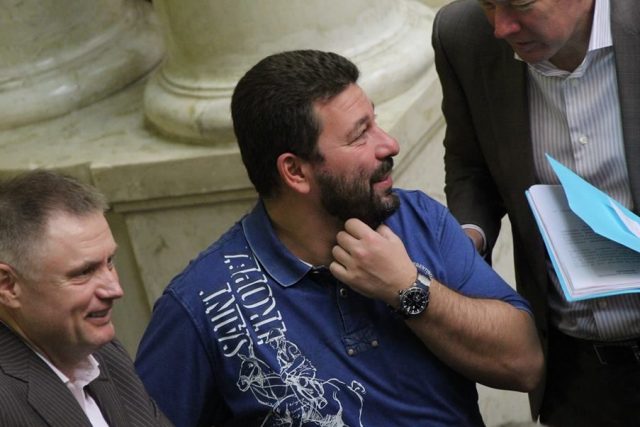 Ukrainian teams often find themselves in the ‘sphere of influence’ of one of the big clubs. While Zorya are not in state of perpetual crisis comparable to Metalist Kharkiv or Metalurh Zaporizhya, they still have substantial financial difficulties and are thus reliant on the loaned out players from Shakhtar to remain competitive. Furthermore, Zorya chairman Yevhen Heller is a businessman and politician with close ties to Shakhtar owner Rinat Akhmetov—hence, Zorya’s dependence on Shakhtar should come as no surprise.

But for a club and one of their ‘dependents’ to meet in a match as important as the cup final is unprecedented. Shortly after his side qualified for the final Vernydub expressed hope that his side would be allowed to field a full strength squad against Shakhtar, commenting “it will be laughable if someone won’t be allowed to play in the final.”

Vernydub got his wish, as Shakhtar announced on Tuesday that all of its loaned out players would be permitted to take part in the match, avoiding a potentially absurd situation in the final.

While Shakhtar will be the overwhelming favorite, reaching the final is a massive accomplishment for Zorya, who have persevered through adversity and demonstrated that they are among the top teams in Ukraine. For Shakhtar this final represents a small opportunity for redemption after an underwhelming, albeit not catastrophic, league season.

Although the special relationship between the two sides is difficult to ignore, the real story of the cup final is the fact that two years after their exile, it is now two displaced clubs that are competing for the trophy.