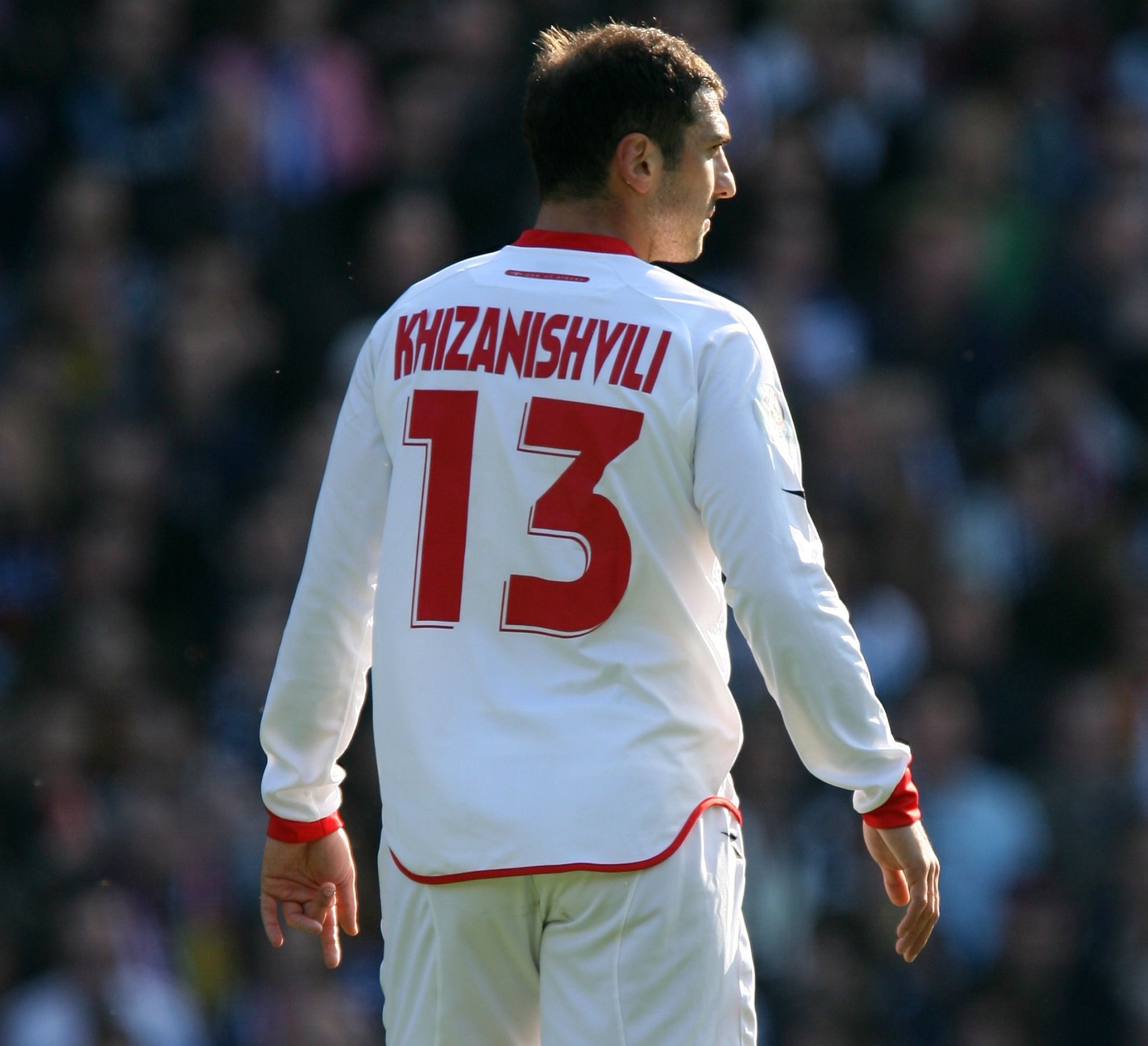 Zurab Khizanishvili – A Georgia Veteran in Search of a Century

Georgia’s second most capped player Zurab Khizanishvili recently returned to the former Soviet republic’s establishment club Dinamo Tbilisi, where it all began for a player who spent eleven years in British football with Dundee, Rangers, Blackburn, Newcastle and Reading.

Despite 93 Georgian caps to his name, Khizanishvili, bedecked in Dinamo training gear, is visibly perturbed about being ignored by former club and country teammate Temuri Ketsbaia, Georgia’s current head coach, since a modest 3-1 defeat to France in March 2013.

Vitesse Arnhem’s Guram Kashia has taken rightful ownership of one of Georgia’s central defensive berths in his absence although the case for other Georgian defenders to replace Khizanishvili appears weak as the nation has regressed to Pot 5 status and outside the top 100 in the FIFA world rankings. 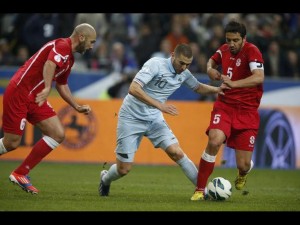 Clarifying the situation, Khizanishvili admits: “I have retired from the coach, but not my country. I will open my heart for my country and would never retire until I stop playing. I dream of reaching 100 caps.”

Otherwise infectiously positive about his life in football, unease descends on the Georgian as he speaks about Ketsbaia, with whom he played at Dundee in Scotland and still considers a friend.

Nevertheless, Khizanishvili adds: “He is a general, but if you have no army you are f***ed. Many players left the team because he criticised the players in the open. We beat Croatia then a few months later he complains that we don’t have Messi, or that the players we have are poor.”

The Georgian’s use of profanities during the interview was something he attributed to his time in Scotland where the language of the country’s national game is notoriously industrial.

Khizanishvili reveals: “I remember people always shouting “nae f***ing chance” and I got used to it. Even now I find myself swearing at home accidentally. Thankfully, my mother doesn’t understand!”

As a 19-year old, Khizanishvili first landed on the British Isles for a trial with West Ham but, even though a permanent deal seemed “50-50” according to the Georgian, his head was turned by an offer from Scotland.

The Georgian recalled: “At West Ham they had Rio Ferdinand, Stuart Pearce and others so when Dundee emerged I had a lot to think about. My father recommended that I go to Scotland so I could play regularly in the first-team.”

That expertise was to be respected, as his father Nodar had been an accomplished defender himself, capped once by the Soviet Union. 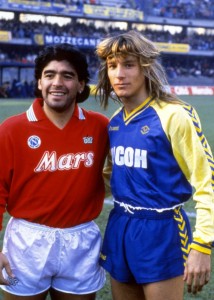 The interest of Dundee, then assembling an expensive, multi-national squad that would predictably lead them to eventual financial ruin, arose when Italian manager Ivano Bonetti watched Khizanishvili play against Italy. Bonetti quickly asked Giorgi Nemsadze, then Dundee midfielder and Georgian international, if his fellow countryman would be enthused about a move to the Scottish Premier League.

Soon, Khizanishvili abandoned East London for the East of Scotland to join Nemsadze at Dundee where, despite the city’s somewhat dour reputation, the Georgian settled quickly.

Khizanishvili noted, with a lingering Scottish twang: “Dundee was fantastic for me. Nemsadze was like a big brother, and within two months it felt like being in Tbilisi. I was very much at home.”

Adapting to the local cuisine was less straightforward, he confessed: “I was given a full Scottish breakfast [traditionally a vast salty frenzy of carbohydrates] and remember thinking “if this is what they eat for breakfast, what do they have for dinner?” before concluding “it was Italian restaurants for me after that.”

Another staggering sight for the Georgian in those early days at Dens Park was that of Claudio Caniggia, the long-haired Argentinian who he had idolised as a child.

Khizanishvili admitted: “I had watched Caniggia play with Maradona at the World Cup when I was 14 and now, a few years later, I was in his team. It was unbelievable.”

Indeed, so high was the standard of Khizanishvili’s performances at Dundee that he would be voted Scottish Football Writers’ Young Player of the Year in 2002-03, still the only foreigner to have ever won the accolade.

Naturally, such prominence attracted more illustrious and better-paying suitors and even Dundee’s qualification for the UEFA Cup was not enough to deter Khizanishvili from accepting a free transfer to the Scottish champions at that time, Rangers.

Explaining how the move arose, Khizanisvhili recalled: “Dick Advocaat had been interested years before so the Rangers connection was a long-running one. He had told Alex McLeish about me and when that chance came, even though I was so happy at Dundee, I had to take it.”

It was not long before Khizanishvili discovered the nuances of Glasgow’s often poisonous Old Firm rivalry. He smiled, as he told the story of the morning he wore green, the unmistakable colour of fierce rivals Celtic, to a training session during which he was immediately reprimanded. 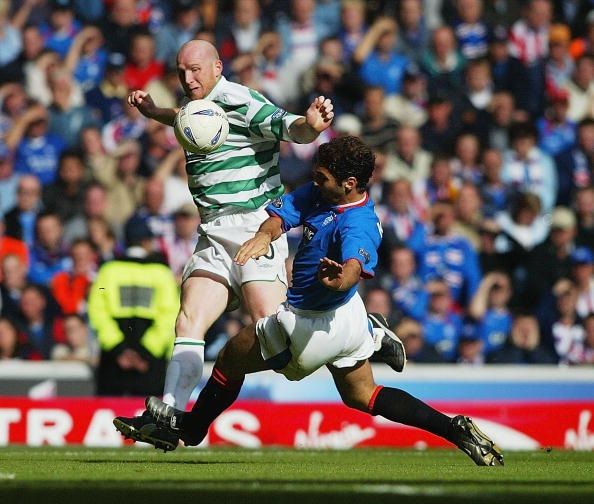 More confusion surfaced when Khizanishvili, like the vast majority of his countrymen a Georgian Orthodox Christian, blessed himself in public, a routine religious custom in his home country but in Scotland a gesture associated closely with the Catholic faith and, in the context of Glasgow’s football tribalism, Celtic.

The Georgian, with a wide smile, recalls McLeish warning him: “Never do that on the pitch. Do whatever you want in the dressing room, but never out there.”

Khizanishvili was a regular in the Rangers lineup in his first season, a lean campaign for the Ibrox club in which they finished a considerable distance behind champions Celtic and failed to reach a domestic cup final, with both of the club’s Georgians (Khizanishvili and Shota Arveladze) missing penalties in a semi-final shootout loss to Hibernian in the League Cup.

In what was years later to become a costly club tradition, Rangers spent big in the summer of 2004 to wrest the title back from Celtic and Khizanishvili’s first-team place became less secure as a result. Upon the arrivals of two central defenders, Frenchman Jean-Alain Boumsong and Greece’s Sotirios Kyrgiakos, the Georgian was a less preferred option for McLeish, a manager he nonetheless rates highly.

Khizanishvili claimed: “Some managers are better on the training pitch but McLeish was brilliant when it came to psychology, especially with younger players. When I first arrived, he didn’t blame me for mistakes and it would have been easy to pick me out. Instead, he blamed Henning Berg or the more experienced guys.”

Refuge at Rovers and Tugay, the Tireless Turk

Featuring fleetingly by now in the much-maligned Scottish league, it was something of a surprise that Khizanishvili earned a move to English Premier League club Blackburn Rovers.

The Georgian recalled: “I was only playing a few games for Rangers so when Blackburn came in it was unexpected. It had always been a dream to play in the Premiership so, even though I would have been happy to stay at Rangers for ten years, I had to go.” 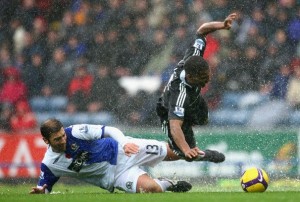 Khizanishvili would go on to spend seven seasons in English football, the bulk of them at Ewood Park and in the top flight, playing alongside the likes of Roque Santa Cruz and Brad Friedel.

However, it was Turkish midfielder Tugay that the Georgian singled out as the best he had played with. Of the Turk, he said: “He was never injured, never tired and didn’t even seem to sweat. I can’t even remember him having a massage, he read the game so well.”

It was in Tugay’s native Turkey that Khizanisvhili (for Kayserispor) last played before rejoining Dinamo in September this year.

Now a father figure for Dinamo’s young squad, and one of only two players over the age of 25, Khizanishvili is relishing passing on his experience.

He added: “The boys are always asking about Drogba and Rooney and playing in England, and it’s a nice feeling.”

Nevertheless, despite his contentment, Khizanishvili’s deal at Dinamo is short-term, running only until January 2015 where he will re-assess his options which, if things go well in Tbilisi, should include a contract extension or an opportunity to move to a stronger league.

Even in the autumn of his career, Khizanishvili is not short on motivation and, if and when Ketsbaia’s reign as national head coach ends, wrestling his way back into the Georgia squad will be at the forefront of his ambitions.