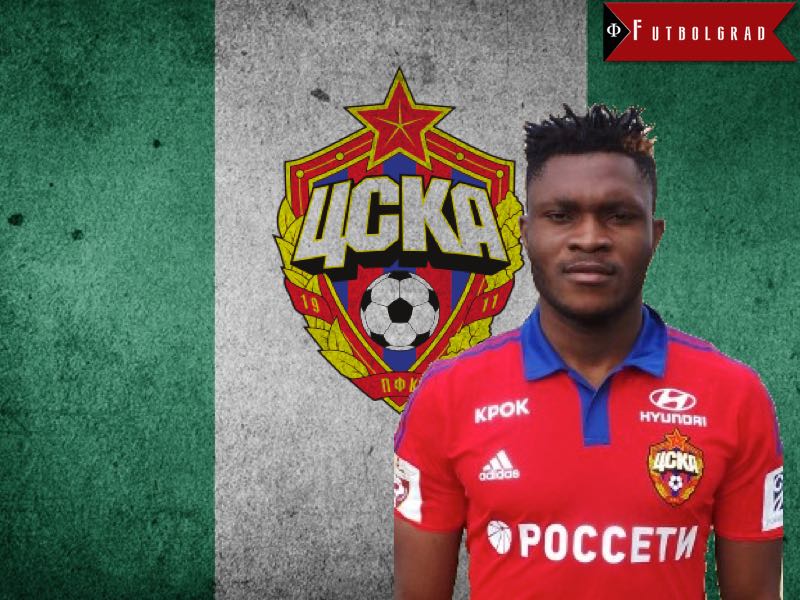 Aaron Olanare is back at CSKA Moscow. This is already the second stint of the 22-year-old Nigerian striker and, this time, he appears to be at the Red Army club for good.

The Nigerian had already joined CSKA Moscow last winter on loan from Guangzhou R&F and, at the time, the club hoped that Aaron Olanare could replace the recently departed Seydou Doumbia.

Back then, early signs were indeed promising, with the Nigerian scoring two goals in his first seven Russian Football Premier League games for CSKA Moscow. Perhaps one of his best performances came on matchday 26 when he scored away against FC Ural Sverdlovsk Oblast.

That game, in particular, showcased that Aaron Olanare could be the perfect player for the CSKA Moscow attacking play in which the centre forwards are often supposed to drop deep and interchange positions with the three attacking midfielders in a classic 4-2-3-1 formation. Following the game CSKA Moscow won the remaining four games of the Russian Football Premier League season to secure the Russian title.

Unfortunately for Aaron Olanare, he had little time to celebrate the championship. The week after CSKA’s victory over Ural, the Red Army men faced Zenit Saint Petersburg in the Russian Cup final.

Aaron Olanare, in that game, picked up an early knee injury after a collision with Zenit midfielder Axel Witsel. Despite the injury, Olanare remained on the pitch with a heavily bandaged knee. He then made it 1-1 and celebrated the goal with a double flip—which aggravated his injury even further and Olanare had to be carried off the field on the stretcher.

Following the injury, Zenit stormed to an easy 4-1 victory. The defeat was then made even worse when it emerged that Olanare had sustained damage to his lateral and cruciate ligaments.

An operation followed, and it was expected that the Nigerian would be out for at least six to seven months. As a result, the injury ended Aaron Olanare’s loan deal with CSKA Moscow, and the striker had to return to China at the end of the season.

Aaron Olanare was out in the cold with Guangzhou R&F

But despite having scored 15 goals and seven assists in 35 games for Guangzhou R&F, there was little interest on the part of both parties that Olanare stay in China. Guangzhou had filled their foreigner spots with new players, and Olanare wanted to continue his career in Europe. 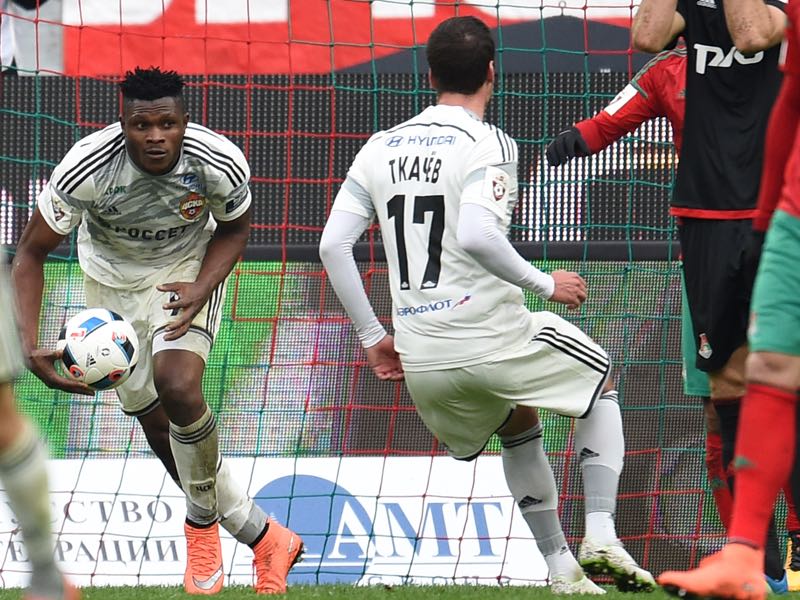 CSKA Moscow, meanwhile, were reluctant to sign Olanare on a permanent deal. The club did not want to have a player on its payroll, who was recovering from a knee injury of this magnitude.

CSKA Moscow, therefore, opted to explore other options on the transfer market, and brought in Lacina Traoré on loan deal from AS Monaco. The 2,02 cm giant from the Ivory Coast, however, did not really fit the system preferred by CSKA head coach Leonid Slutsky.

Despite being fast, Traoré, is more of a target man who can hold the ball while the attacking line advances. Traoré would have been great in combination with Ahmed Musa. The quick and agile Nigerian forward, therefore, left the club to join Leicester City in England.

CSKA Moscow, having signed a forward that did not fit the system, was predictably eliminated from the UEFA Champions League group stage, and then quickly dropped out of the RFPL title race as well.

After the last Champions League group stage match against Tottenham Hotspurs, Leonid Slutsky announced his resignation, thereby making room for Ufa head coach Viktor Goncharenko. Goncharenko, who was part of the coaching staff at CSKA Moscow during the 2015-16 season, must have remembered Aaron Olanare’s abilities and, as a result, the club decided to bring the Nigerian back on a permanent deal this winter.

The Nigerian could now become the key piece in Goncharenko’s effort to rebuild the club. Strong and tall, at 189cm, Aaron Olanare has the ability to give more depth to CSKA’s attacking play.

Unlike Traoré, Olanare can often be found dropping deep to collect the ball. With that work rate he is better suited to link up with the attacking midfield line, and interchange positions, which should bring more dynamism to CSKA’s attacking play.

At Ufa, Goncharenko also liked to use the 3-5-2 system with two strong number nines up front. Here, Traoré could partner up with Olanare with the powerful Ivorian acting as the target man who could create space for the quicker Olanare.

Another option would be to play Olanare together with the recently returned Vitinho. In this setup, Vitinho would be the more mobile of the two, with Olanare using his physical presence to create chances by creating holes in the opposition’s defence.

Either way, Goncharenko will now have more options up front, which is good news for CSKA fans who have been somewhat goal-starved in the first half of the season. But there is one major question mark going into the second half of the season. Will Aaron Olanare’s knee hold up?

After all Olanare has not played a competitive game since the Russian Cup final last May. Here, the long winter break of the RFPL will become key. At just 22-years of age, Olanare could be crucial to CSKA’s future, but only if Goncharenko manages to bring him up to fitness, and integrate him in the squad. The second half of the season will not kick off until March, which should give Goncharenko enough time to work his magic with Aaron Olanare.