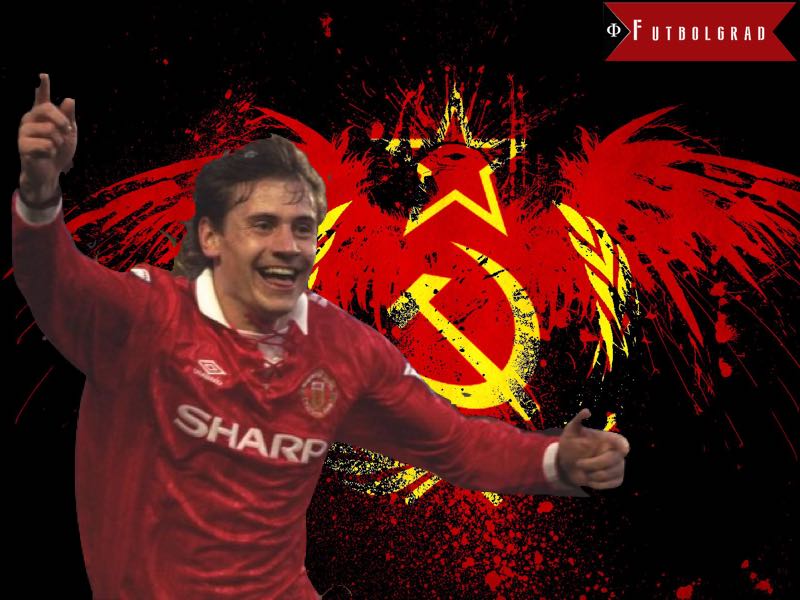 Andrei Kanchelskis – The Lost Art of the Winger

The dynamics of football have changed dramatically over the years. Positions have evolved so much so that ball control, attacking play and sheer expressionism have been encouraged over hard work.

Full backs are more like wingbacks nowadays. Applauded and encouraged to get forward more than ever before. The influx of foreign players in all the top European leagues has meant cultural diversity. New approaches to coaching have been melded with traditional views, thus the game has adopted new mechanics—a natural way to improve football.

The complexities of certain positions have meant more is expected of the modern day football. But is this a good thing?

The days of the odd cigarette and a pint of lager after a game have gone. The era of the super athlete is here, and here to stay. Nutrition, intense fitness regimes and complex training schedules are the order of the day.

We’ve also witnessed the demise of no-nonsense central defenders. The modern era celebrates a ball playing defender. Now we see a back four or five that is competent on the ball, and is able to attack as easy as they are disposing an attacker.

English football has seen many Russian footballers over the years. Whether it’s in the form of Yuri Zhirkov who had a torrid time at Chelsea in the early 2000s or the legendary Andrei Kanchelskis who spent some wonderful years at Old Trafford and then at Everton, Russia has certainly made an impression on the Premier League.

But what is this article actually deposing?

Kanchelskis represented the old fashioned winger, something that has ultimately been lost over time. During the early days of the Premier League, the pinnacle of English football was full of robust wingers that were equally known for their work rate without the ball at their feet.

Kanchelskis played 36 times for Russia, but his best football was for Manchester United. He won two Premier League titles at Old Trafford, although it wasn’t his cultured approached to the game that enamoured him to the fans in Manchester. Kanchelskis was an old fashioned winger. He had devastating pace, he could tackle, would run until he was ready to drop and could score goals for fun, from anywhere on the pitch. For these reasons alone, it was probably why he fitted in so well in England. He was unassuming – an honest football on and off the pitch, something today’s game is lacking.

Today wingers are easily criticised for lack of work rate

The problem is with today’s game, we are filled with gifted footballers than don’t want to work hard once they cross the line. High profile stars like Chelsea’s Eden Hazard have come under intense criticism for their lack of work rate in recent seasons. First, it was reported he had many fallouts with previous Chelsea manager Jose Mourinho about his lack of defensive work. Then in the summer Face of Football reported Antonio Conte could sell the Belgian because he didn’t fit the Italian’s style of play. All in all, while the game has evolved for the good, some things have been lost in translation.

An old fashioned winger used to provide a team with balance, both in attack and in defence. It was the perfect foil for dangerous attackers, providing the fullback with defensive cover. Sir Alex Ferguson knew this and deployed Kanchelskis in this manner to devastating effect. Across England 36 miles away from Manchester in Leeds, Howard Wilkinson would employ similar tactics during their title-winning season. He would use Gary Speed and Gordon Strachan as old-fashioned wingers to great success.

The move to attacking midfielders or the often-used 4-3-3 formation has left full backs more isolated and thus weakened defenses. Thus, the positional responsibilities have been lost over the years and now for some, seem non-existent.

Looking back at this week’s Champions League games, in ties such as the CSKA Moscow versus Tottenham game, the type of footballer on show is much different from Kanchelskis’ era. Betfair who cover the Champions League and Premier League football, wrote an article prior to the game documenting how attacking midfielder Heung-Min Son has been contributing some “excellent performances” of late. But Son is part of the new breed: excellent in attack, severely lacking when in defensive situations. Thus, sides like Tottenham are forced to deploy defensive lynchpins like Eric Dier to give the defence cover.

Has such formations helped to develop football? Or are we craving the old fashioned wingers such as Andrei Kanchelskis? The 4-4-2 formation is often seen as being outdated, but if we learned anything from Leicester City’s title winning team last season, old-fashioned wingers could well be making a return in the near future.