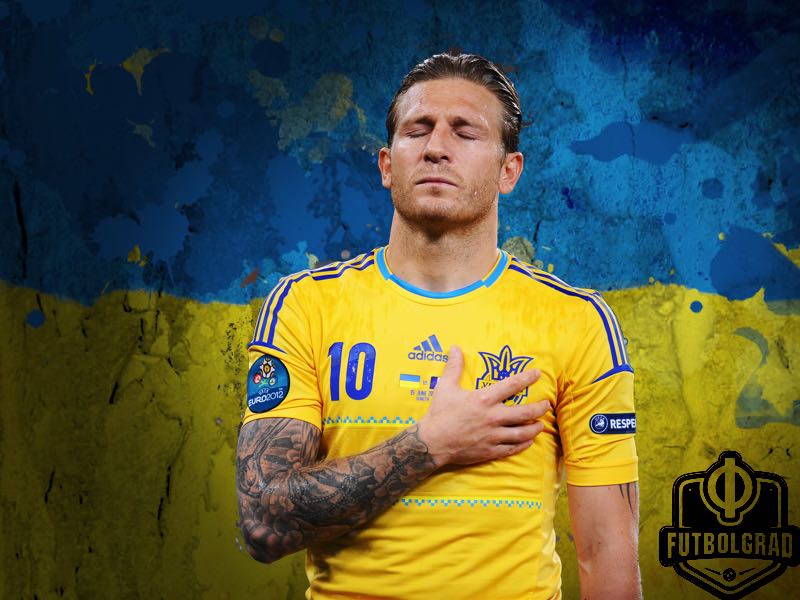 Andriy Voronin – A Cosmopolitan With a Ukrainian Heart

According to the Ukrainian sports portal football.ua Voronin will be in charge in scouting Ukrainian players playing abroad. Given Voronin’s history, he is a perfect candidate for the job. Aside from the clubs mentioned above, Voronin has had a long career in Germany playing for Borussia Möchengladbach, Mainz and 1.FC Köln before becoming one of the biggest stars of German football while being on the books with Bayer Leverkusen.

Back in the 2004-05 season, he formed a deadly partnership with Dimitar Berbatov at Bayer Leverkusen. That time at Leverkusen perhaps describes the pinnacle of a career of the Ukrainian forward who had a remarkable career in Germany. 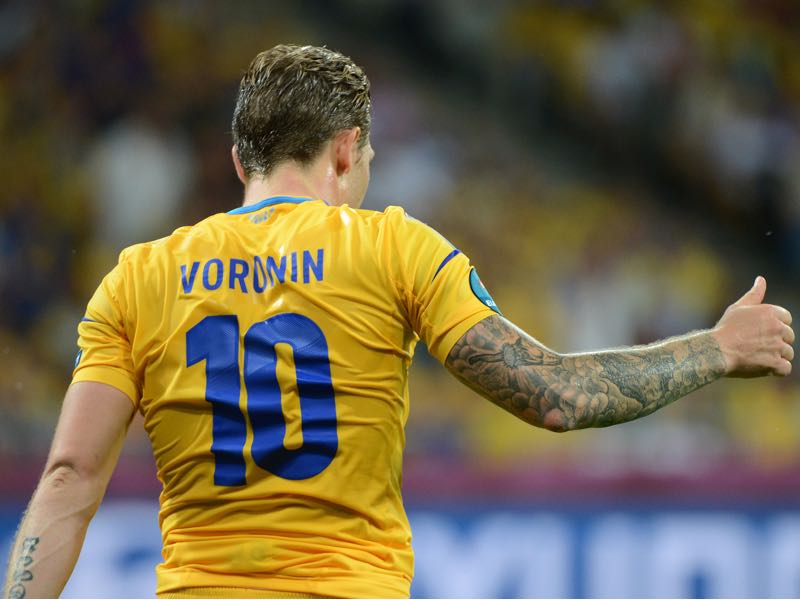 Perhaps one of the most interesting aspects about Andriy Voronin is the fact that he never played in the Ukrainian Premier League. Born in Odessa in 1979 Voronin was a part of Chornomorets’ youth academy. Born at the dawn of the last decade of the Soviet Empire Voronin grew up at a time when the Soviet machine was creaking at every seem and then finally became undone in 1991 when Ukraine joined the Baltic States and the Caucasus Republics in declaring independence from the Soviet Union.

Andriy Voronin was Part of the Big Migration

Overnight the Soviet Union was gone, and Ukraine created its top division. The collapse of the empire meant that Soviet citizens now had more freedom to move abroad. Chornomorets was one of the founding members of the new Ukrainian top flight and won the Ukrainian Cup in 1992 and 1994. But the club could not convince Voronin to stay with the club.

On the latest Futbolgrad Podcast Manuel Veth, Tim Bogdachev and Andrew Flint speak about the decisions that citizens of the collapsing empire had to make. For many staying in the post-Soviet space following the collapse of the USSR was not an option. The same was true for Voronin, who joined Borussia Mönchengladbach straight from Chornomorets’ youth academy in 1995.

Two years later he made his debut for the Foals. Playing seven games and scoring one goal in the 1997-98 season Voronin’s first experience in the Bundesliga was one of disappointment. Gladbach would be relegated at the end of that season and enter one of the toughest periods in the club’s history. Voronin in the meantime hoped that Bundesliga 2 football would give him an option to kick off his career in Germany.

Coached by Jürgen Klopp Voronin scored eight goals and eight assists and finally managed to establish himself in the first team. Then the following season came the significant breakthrough with 20 goals and four assists. But for Mainz, the season ended in disappointment as the club just missed out on promotion. As a result, Voronin did not renew his contract and joined newly promoted 1.FC Köln in the Bundesliga.

At that point, he was one of the most highly sought-after talents in the Bundesliga and for Köln securing his signature was a major success—especially as they beat the likes of local rivals Leverkusen to the signature. Bayer, however, had the last laugh as Köln were relegated, which meant that they were able to secure their transfer target after all.

What followed was one of the most dangerous forward tandems the Bundesliga has ever seen. Berbatov and Voronin formed a partnership that guaranteed goals. In 2004-05 Voronin scored 15 goals and Berbatov 20. The following year the two would combine for another 28 goals.

Voronin then reached more prominence when he was part of Ukraine’s national team that reached the 2006 World Cup in Germany and stormed all the way to the quarterfinals where eventual winners Italy beat them. Unfortunately for Bayer, however, the exploits of the two strikers were not unnoticed with English Premier League clubs. 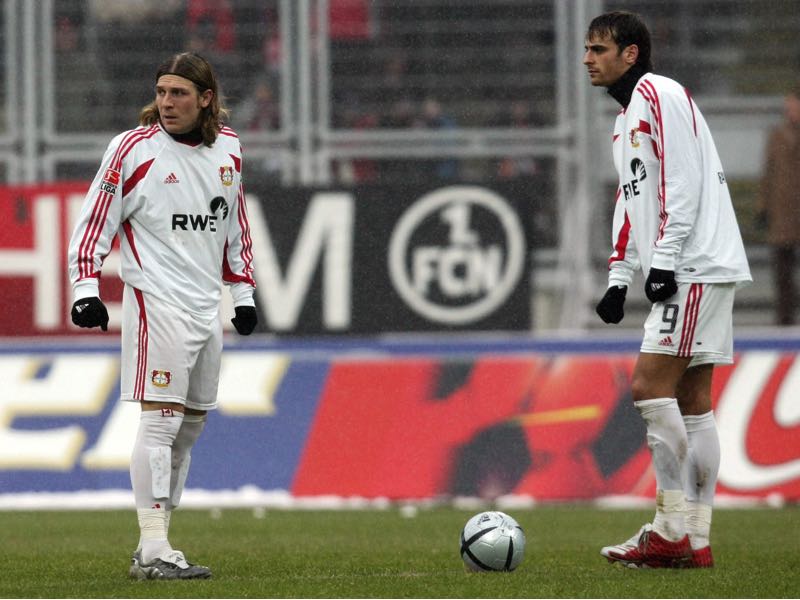 Both players would be eventually lured away. Berbatov would join Tottenham Hotspur, and Andriy Voronin would join Liverpool. English football, however, is a beast. Lots of money and lack of patients of most EPL teams means that players are given very little time to develop. Players are bought and sold in quick succession in England with managers moving on to the next shiny thing rather than assembling a team.

Voronin – Via Berlin to Moscow

In this environment, Voronin, with his unpronounceable name and lack of big country pedigree, struggled to establish himself. After two seasons he was back in Germany this time with Hertha scoring 11 goals in 27 games. Signed on loan Voronin was one of the big reasons Hertha almost stormed into the Champions League under then-coach Lucien Favre.

Back then the Bundesliga only had three starters at Europe’s biggest stage—finishing fourth Hertha missed out on the Champions League by just one point to VfB Stuttgart. Voronin was still on a massive English Premier League contract, which made it next to impossible for Hertha to hang on to the star striker. It was a real shame when Hertha announced that they could not meet Liverpool’s demands and that they could not hold on to the Ukrainian striker.

Instead, Voronin headed to Russia. Dinamo Moscow was amidst a gold rush at the time. Funded by the wealthy Rotenberg family and sponsored by the VTB-Bank Dinamo were trying to put together an all-star team that could finally win a Russian Football Premier League title.

At Dinamo, Kevin Kuranyi joined him. The former German national team forward made a shock move from Schalke 04 to the Russian capital in 2010. It was the season of the long transition when Russian football switched their league calendar from the old Soviet spring to fall calendar to move in line with the rest of Europe. 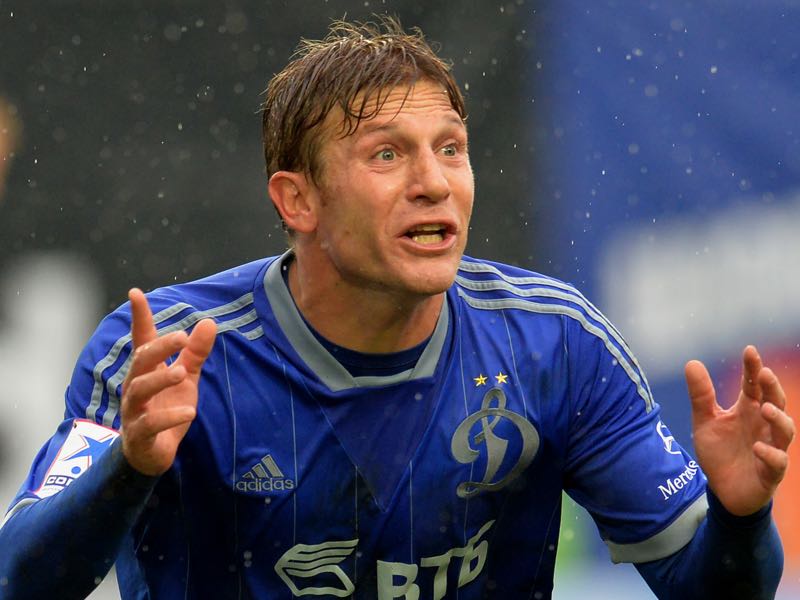 Andriy Voronin during his time at Dinamo Moscow. (Photo by Epsilon/Getty Images)

In a league where it ‘s hard to score many goals, the two formed a fascinating partnership for Dinamo Moscow. Voronin would often hang deep supporting the all in all striker Kuranyi. It was a style that he refined while playing at the later stages for Bayer Leverkusen and then Hertha. Almost acting like a number 10 his playing style preceded that of Thomas Müller and Lars Stindl, who play similarly.

The same was true for the Ukrainian national team where he often acted as the creator rather than the all and out striker. Voronin’s style of play was therefore in many ways revolutionary. 109 goals in 339 club games highlight that he was a player that was not just valuable for scoring goals. Wearing the number 10 for Ukraine, he scored just eight goals in 74 Ukrainian national team games.

It is perhaps interesting that Voronin, who now lives in Germany, stayed close to Ukraine nonetheless. It is one of those phenomena of post-Soviet football. Like many other players, history forced Voronin to seek his fortune away from home, but his latest decision to work for the Ukrainian Football Federation demonstrates that despite a global career Voronin always remained attached to his country.